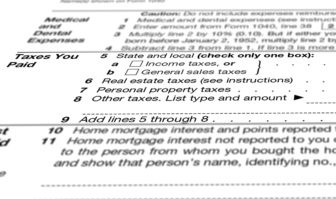 Washington – A federal court on Monday dismissed a lawsuit by Connecticut and three other high-income states seeking to overturn a new cap on the deductibility of state and local income taxes on federal returns.

The so-called state and local income tax, or SALT, cap was limited to $10,000 during a massive federal tax overhaul in 2017. The limit is an amount Connecticut, New York, New Jersey and Maryland said hurt wealthy states with high property taxes.

U.S. District Judge Paul Oetken in the U.S. District Court of the Southern District of New York, said those states failed to show that the cap on the popular tax break exceeded Congress’ broad taxing power or was unconstitutional.

Connecticut Attorney General William Tong hinted at an appeal of the decision.

“The SALT cap is an abusive and discriminatory tax hike on Connecticut,” Tong said. “This disappointing decision makes it harder for our state to protect its taxpayers from the disproportionately harmful effects of Trump’s tax law. We are in close coordination with other impacted states to consider next steps.”

The ruling is a victory for the White House and Republican supporters of the 2017 tax overhaul. The SALT cap helped pay for parts of that $1.5 trillion overhaul, which included cutting taxes for wealthy Americans and slashing the corporate tax rate.

The SALT cap went into effect for the 2018 tax year. The Trump administration has estimated it would leave filers unable to deduct $323.1 billion in state and local taxes from their 2018 returns.

Connecticut and the other states argued that the SALT cap effectively raised property taxes by eliminating the full federal deduction of property taxes, thereby discouraging home sales and decreasing revenues to states collected by taxing such sales.

The states also said the tax law was an unconstitutional power grab that affected state’s rights.

“To be sure, the SALT cap, like any other feature of federal law, makes certain state and local policies more attractive than others as a practical matter,” he said. “But the bare fact that an otherwise valid federal law necessarily affects the decisional landscape within which states must choose how to exercise their own sovereign authority hardly renders the law an unconstitutional infringement of state power. “

Oetken also wrote “Because the States have failed to plausibly allege that the cap, more so than any other major federal initiative, meaningfully constrains this decision-making process, this Court has no basis for concluding that the SALT cap is unconstitutionally coercive.”

The House Ways and Means Committee is weighing several bills that would undo or eliminate the SALT cap. A leading bill  would repeal the cap while also raising the top marginal tax rate on individuals from 37 percent to 39.6 percent, where it was before the 2017 tax law.

While the Democratic-led U.S. House may pass legislation that would  fully restore the deductibility of state and local taxes, that legislation is likely to languish in the GOP-led Senate, especially after Oetken’s decision.