Thomas Katsouleas highlighted his inauguration ceremony Friday as UConn’s 16th president with an announcement that lower-income Connecticut undergraduates starting at the university next fall will be eligible for free tuition. 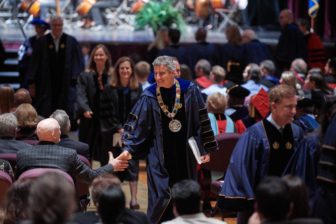 “It is critical for U.S. higher education institutions to work to change both the perception and reality of what they deliver,” Katsouleas said. “This is critical for the future prosperity of Connecticut. To keep our brightest, most talented and most diverse human capital in Connecticut, we must continue to offer as many of them as possible a high quality and affordable education in their state.”

During his inauguration, which was held at the Jorgensen Center for the Performing Arts on the university’s Storrs campus, Katsouleas spoke about how UConn’s new financial aid program — called the Connecticut Commitment — addresses a problem in higher education.

He said that for the first time in history, a Pew survey showed that a majority of Americans in some demographics see “top tier institutions as not for them, as for the elite and even a scam. And this is the same demographic that swung the past presidential election. So it matters.”

The announcement of the plan received a standing ovation from the audience.

Katsouleas also used the moment to announce an aggressive campaign to raise additional funds for the needs-based scholarships to fund the program, which he estimated will benefit approximately 6,000 UConn students over the next four years. He said he also hopes to increase the income threshold over the next five to seven years.

“But affordability is not enough,” Katsouleas said. “We must continue to  invest in excellence, including doubling research over the next seven to 10 years to ensure that we attract the the most distinguished faculty and diverse faculty to teach our students.”

To that end, he announced two faculty hiring initiatives, including one targeting faculty who are noted because of their specialty or prominence and another focusing on the hiring of a cluster of faculty to boost the expertise of a department.

Katsouleas didn’t put a pricetag on the financial aid program or the faculty hiring plans. UConn spokesman Stephanie Reitz said it wasn’t yet clear what those costs will be.

The tuition initiative will provide students whose families have an annual income of $50,000 or below with the opportunity to come to the university tuition-free. Tuition this fall was $13,798.

The program would not include room and board, which came to $13,238 this semester, or fees at $3,428, but  Reitz, spokeswoman for the university, said that if students have other scholarships aimed at defraying tuition, they can use funds left over in their Connecticut Commitment grants to cover those costs.

Reitz said that many of the students from families with incomes well below $50,000 will already qualify for federal grants and other scholarship programs, but she said there is a band of students whose families make too much money to qualify for the federal grants, but not enough to be able to afford UConn.

“We are finding that a lot of students in that particular cohort are not even applying to UConn because they are realizing they can’t afford to make up the difference,” Reitz said.

She said the situation disadvantages UConn because the university “misses out on great students” who don’t feel they can afford to attend. 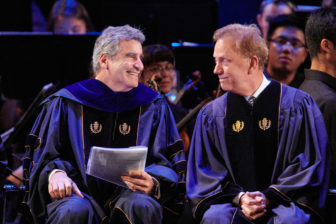 President Thomas Katsoueas, left, and Gov. Ned Lamont onstage during the inauguration ceremony at the Jorgensen Center for the Performing Arts.

Beginning with incoming freshmen next fall, students may receive the Connecticut Commitment grant for a maximum of four years if they remain in good academic standing and their families continue to meet the income qualifications. Incoming transfer students are also eligible for the award for up to two years with the same conditions.

All admitted Connecticut residents who are enrolling as freshmen or transfer students will be automatically considered for the Connecticut Commitment institutional grant if they fill out the FAFSA form by the Feb. 15 annual deadline.

The award is also available to more than one sibling at a time.

Katsouleas came to UConn in August after serving as a vice president and provost at the University of Virginia. He was previously the dean of the Pratt School of Engineering at Duke University.

His inauguration Friday included a morning of presentations by faculty in their areas of expertise and an afternoon ceremony with visitors that included his father, visiting from Greece, and the Greek Orthodox Archibishop of America, His Eminence Elpidorphoros Lambriniadis.

“There are so many family and friends here and wonderful guests, about half of whom I know, with whom the few hours we have together are a glowy and emotional blur, that it feels a bit like a wedding, ” Katsouleas said,” and since the Greek community is well-represented … I’m going to call this my ‘big fat Greek inauguration.'”

“But please don’t break the plates” at the reception following the event, Katsouleas said.

Richard Brodhead, the former president of Duke University and former Dean of Yale College, and Gov. Ned Lamont also spoke at the event.

Brodhead, who hired Katsouleas at Duke, said he is a “warm, decent, genuinely nice person. That’s not enough to qualify you to be president but, believe me,when combined with other gifts, it certainly doesn’t hurt.”

He said that Katsouleas’s background as a leading plasma scientist and engineer show him to be a problem-solver.

“At heart, engineers are people who see tough problems as challenges to their ingenuity,” Brodhead said. “When you see a dead end, Tom is going to want to get creative and he’s going to expect you to join that fun as well.”