Will an age of activism and strikes lead to union growth? 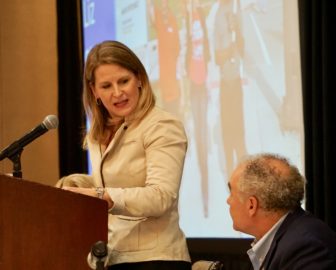 Liz Shuler, the number two leader of the national AFL-CIO, and Sal Luciano, the Connecticut president.

Mashantucket — One of the workshops at the Connecticut AFL-CIO’s two-day convention that opened here Thursday explored the lessons offered from “worker power resurgence,” a reference to labor’s extraordinary year of strikes and other work stoppages in 2018.

“We are living in an incredible moment for working people,” said Liz Shuler, one of the highest ranking women in the labor movement as secretary-treasurer of the AFL-CIO, its second in command. “They are speaking out and taking risks like we haven’t seen in years.”

“Workers in every industry from teachers to tech are rising up and saying, ‘Enough is enough. Something has to change. Something has got to give,’ ” Shuler told an audience of 300 in a ballroom at Foxwoods Resort Casino, where employees are unionized.

But a question for labor is which metric says the most about the health of the American labor movement: The greatest number of strikes in 30 years, or the continued erosion in the number of workers represented by unions?

In Connecticut, the percentage of union members fell from 16.9% to 16%.

Gov. Ned Lamont is to address the convention Friday, when he can expect applause for his support of legislation that raised the minimum wage from $10.10 to $11 on Tuesday, with a series of annual $1 raises until it reaches $15.

Off stage, Shuler said Thursday she sees a political and cultural shift favorable to unions. The spate of strikes comes at a time of greater activism on everything from the MeToo movement to marches demanding action on climate change.

In August, the Gallup poll found 64% of Americans approving labor unions, topping 60% for a third consecutive year — and up 16 points from its low of 48% in 2009, the second year of the Great Recession of 2008.

“People turning to the unions as a solution is coming back,” Shuler said.

“Those were very organic strikes,” Shuler said. “The members were truly leading from the ground up. It wasn’t like a leader from on high saying, ‘We shall strike now.’ It was definitely  the workers themselves. I would say a good metric for this kind of union momentum is the level of momentum at the ground level.”

One of her projects has been to lead the labor federation’s efforts to become more relevant to younger workers, which has included trying to organize video game developers, whom she says are pressed into working 14- and 16-hour days rolling out new games.

“This industry is three times the size of Hollywood, yet they have no rights on the job,” Shuler said.

Shuler said organizing in the tech sector requires labor to be “relevant to a workforce that might want or need different things.” 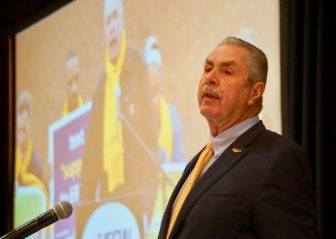 Marc Perrone, the leader of the UFCW, whose members struck Stop & Shop.

“I know tech workers are very much independent. Their politics are a bit different,” Shuler said. “They want to use their collective power to change corporate behavior just as much as they want to negotiate good wages.”

Shuler is the daughter of an electric utility worker in Oregon whose company was purchased by Enron. When Enron failed, her father lost the pension benefits he accrued over 40 years, she said. She followed him into the IBEW, the International Brotherhood of Electrical Workers, as an organizer in 1993.

Shuler is one of two women seen as likely successors to Richard Trumka, the 69-year-old president of the AFL-CIO. The other is Sara Nelson, the president of the Association of Flight Attendants. Trumka’s term expires in two years.

Her speech Thursday echoed one given by Trumka at the AFL-CIO convention in Massachusetts last week.

“It’s an exciting time to be in the labor movement,” Trumka said. “Workers are rising. We are refusing to settle for less. And we are using every tool at our disposal to win what is fair. Earlier this year, when Stop & Shop proposed a contract that would’ve forced 30,000 UFCW members across New England to endure less health care, less retirement and less dignity, workers stood up and said no!”

Marc Perrone, the international president of the United Food and Commercial Workers, called the strike a huge success, winning the support of other unions and consumers. He dropped a plug for Shuler into his convention speech, calling her “the most competent secretary-treasurer the AFL-CIO ever had.”

Shuler no longer is coy about wanting to lead the AFL-CIO.

With 6.5 million women in the federation, Shuler says the AFL-CIO is the largest women’s organization in the U.S.  If elected in two years, she would be the first woman to lead it.