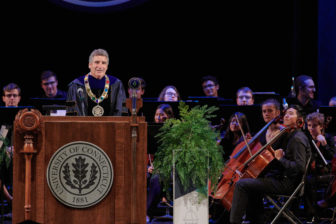 This story was updated at 6:20 p.m. with comments from the university.

Senate Minority Leader Len Fasano has some questions about UConn President Thomas Katsouleas’ plan to offer a free tuition program for families with incomes of less than $50,000.

Katsouleas revealed the free tuition proposal during his inauguration in Storrs last Friday. The university  released details about how the program would work late Wednesday afternoon.

Fasano, R-North Haven, said he found it “a little bit out of the norm for a new president” to commit to a free tuition program without reaching out to legislators. Wednesday, Fasano released a copy of the letter he sent to Katsouleas asking for details about the proposal.

“Maybe he reached out to everyone but me,” Fasano said, “but not reaching out to the Senate Minority leader saying, ‘Hey, this is what I’m thinking, this is how I plan to pay for it,’ to go out there and say it’s free. I doubt UConn professors are going to teach courses for free.

“You’re a new president, you owe a certain amount of responsibility to the fiduciary not to play to the politics … of saying free, free, free.”

Fasano’s letter to Katsouleas, who started his job at the university on Aug. 1, asks what the cost of the program will be and how UConn will pay for it.

“While UConn’s spokesperson has indicated that these costs are not clear yet, I cannot imagine you would announce these plans if you were not certain UConn could afford these new expenses,” Fasano wrote. “Second, I would like to know how you plan to pay for these initiatives. Will the UConn Foundation be covering these new costs? I understand that some UConn Foundation funds are already designated to be spent for specific purposes. I would like to know how much funding the UConn Foundation has in total and what all funds have been designated for.”

Fasano’s letter also asks Katsouleas whether he plans to increase tuition and other fees at the school over the next two to five years, and whether UConn will be seeking additional state funding.

Fasano said he is concerned that tuition might have to continue to go up to cover the cost of the program.

“Over the last six years, we’ve gone up on tuition for kids,” he said. “So, you know, is that what we’re going to do? Go up on [some] kids to support other kids?

He added, “UConn just cried broke. We had to give them — the Democrats did — give them more money because they couldn’t afford the fringe [benefits], so how are we affording free college? It’s so easy to stand out there and say free, free, free, but how are you going to pay for this?”

In a statement released late Wednesday afternoon, a spokesman for UConn said the plan was “foreshadowed” on multiple occasions by Katsouleas – in meetings with lawmakers and in interviews with the media.

“President Katsouleas foreshadowed the plan in a number of places before it was announced; he’s been meeting with members of the General Assembly in groups, by delegation, for the past several weeks and outlined the plan at a high level in those discussions,” said Michael Enright, a spokesman for the university.

“UConn has no plans to seek additional dollars in its state appropriation to fund it,” Enright said. “Rather, UConn is funding it at the outset by reallocating money within the university’s existing budget to our financial aid budget.”

The program is estimated to cost about $1 million per class that enrolls at the school, the university said, adding that it expects between 900 and 1,400 students per class to come from families with household incomes of  $50,000 or less.

Of these students, about 75% already receive awards that cover tuition, and in some cases, more than tuition. The remaining 25% of students will receive supplemental financial aid awards to bring the level of commitment to the amount of tuition.

While the UConn Foundation raises money to pay for the program, the Connecticut Commitment will be funded via need-based institutional aid.

The university will also aggressively work to raise private philanthropic dollars that will help support the cost of the plan going forward, Enright said. The initiative will have no impact on the tuition paid by other students, or their financial aid packages, he said.

At his inauguration last week Katsouleas said research shows that a majority of Americans in some demographics see a top tier institution as “not for them, as for the elite and even a scam.”

He said he wants to reach out to those students who think they can’t afford UConn and give them a chance to enroll.

Another key Republican lawmaker, House Minority Leader Themis Klarides, R-Derby, also has concerns about how the school will pay for the program.

“I think the bottom-line is that we have a multi-billion dollar deficit and we have to be very cognizant of where our money is going,” Klarides said. “Certainly education is a priority to all of us, but we also have elderly and children and housing and paying off pensions and all these things. These things have got to be prioritized and money is an issue.”

But at least two Democratic legislative leaders — one of whom had partial advance knowledge of Katsouleas’s plan and another who hadn’t any — expressed strong support for the free-tuition plan.

Rep. Gregg Haddad, D-Mansfield and co-chairman of the higher education committee, said he was at a meeting with Katsouleas when he mentioned he was considering making a financial commitment to a certain pool of students.

“They had mentioned a commitment to students [with family earnings] under $50,000, so it wasn’t like I was completely unaware of it it,” he said, “but when they posed it to me, it was more like they were thinking about it — not something that was imminent. They asked me to withhold any public comment on it until after they made the announcement.”

Haddad said he thinks the program “is a real step forward” in the university’s financial aid effort.

“I think we have heard anecdotally that there are a lot of folks who gain admission to UConn but can’t figure out ways to afford the tuition there,” Haddad said. “And I’ve heard from constituents that their sons and daughters have gotten better financial aid packages at other private universities.”

“It does clarify that one of the central expectations that we have for a public university to provide a really quality education at an affordable price.”

Haddad said the Board of Trustees has the responsibility to run the university and it doesn’t surprise him that “the university would take what resources it has to make a commitment like this. I think it’s the right move, not the wrong move.”

While communication with lawmakers is aways important, Haddad said, “It seems petty to me to be criticizing on those grounds.”

He noted that some lawmakers have complained that UConn has not shown a strong enough commitment to middle-class families in Connecticut.

House Majority Leader Matt Ritter, D-Hartford, said he didn’t find out about the free tuition program until he read published reports, but he thinks it’s a good step.

“Anything we can do to make it easier for students to attend college is a great thing,” Ritter said. “It sounds like they think they can raise this money privately, which is terrific. Hopefully they will be able to cover more people in the coming years.”