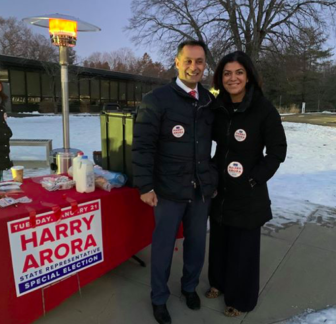 Harry Arora and his wife, Nisha.

Republican Harry Arora defeated Democrat Cheryl Trepp Moss in a special election Tuesday night in the 151st House District of Greenwich, a win that keeps the seat of former Rep. Fred Camillo in the hands of a party trying to regain dominance in a long-time GOP stronghold.

Arora won with 54% of the vote, 2,345 to 1,965, according to results posted on the secretary of the state’s elections reporting site.

The election came at a time of relative turmoil for Republicans in Greenwich, where Republican voter rolls have fallen and Democrats won state Senate and state House seats in 2018, upset victories largely attributed to dissatisfaction with President Donald J. Trump.

Arora is a native of India who came to the U.S. for graduate school, first at the University of Texas and then at Harvard. He is a former Democrat and unaffiliated voter who registered as a Republican before making a largely self-funded run for Congress in 2018.

“I think politics is local,” J.R. Romano, the Republican state chairman, said Tuesday night. “I understand Democrats want to make every election about Donald Trump, but they can’t.”

Despite Romano stressing the local nature of the race, it was a national GOP group, the Republican State Leadership Committee, that tried to find national significance in an election won on the same day the Senate began the impeachment trial of the president. It cast Arora’s win as a “major victory in deep-blue Connecticut,” a proclamation ignoring that the seat on the ballot Tuesday has been held by Republicans for decades and that Greenwich is hardly deep blue.

“From supporting a radical socialist agenda to unconstitutionally impeaching the president, Democrats up-and-down the ballot are facing a harsh reality that they’ve lost the American people,” said Austin Chambers, the group’s president. “We are proud to have stood with Harry and congratulate him on tonight’s victory.”

As a challenger in 2018 to U.S. Rep. Jim Himes, D-4th District, Arora was largely supportive of Trump, backing the president on trade and foreign policy. It was the first run for public office by Arora, a former Enron trader who established his own commodity hedge fund in 2006.

In his latest campaign, Arora trumpeted his opposition to tolls in Facebook ads that left the impression that the legislature still was considering tolling all vehicles, not just tractor trailers. “Tolls are a tax that will hurt those that are more most vulnerable in our society,” he said. “As your state rep, I will fight for NO TOLLS.”

In three special elections this month, the status quo has reigned: Democrats retained their state House seat in Colchester, while Republicans held their seats in Fairfield and Greenwich. Democrats will open the 2020 legislative session on Feb. 5 with majorities of 91-60 in the House and 22-14 in the Senate.

Greenwich was one of the wealthy Republican communities in Connecticut that rejected Trump in 2016. He won only 39% of the vote.

But Camillo won an open race for first selectman with 57% of the vote, a strong victory that Republicans hoped signaled a recovery.

Moss, a small business owner, won the editorial  endorsement of the local paper, the Greenwich Time.

The paper said Arora’s “true shortcoming is a blank resume on local causes, while Moss has been a celebrated volunteer with the Greenwich High School swim and water polo programs and the Greenwich Land Trust and Garden Education Center, a PTA member and a member of the Representative Town Meeting.”

Democratic State Chairwoman Nancy Wyman said Tuesday night, “Cheryl worked hard and shared a strong vision for how to serve the voters of Greenwich, and I certainly hope we see her running for public office again.”

Moss and Arora both ran as publicly financed candidates under the Citizens’ Election Program, which provided each about $21,000 and limited their spending to about $25,000.