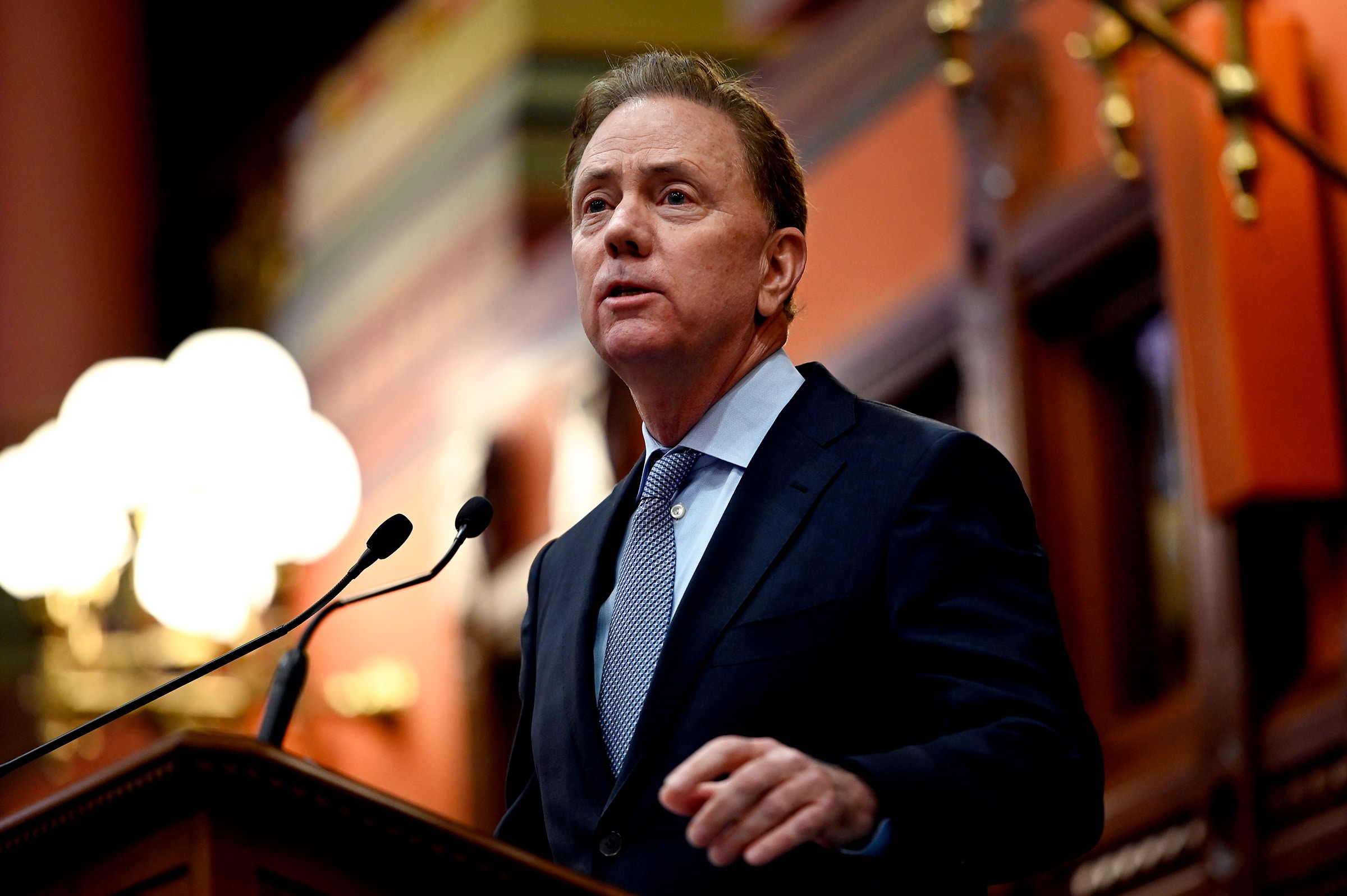 Gov. Ned Lamont discussed vaping, marijuana legalization and prescription imports from Canada in his State of the State address and budget release Wednesday.

With only three months to move bills through the legislature, Gov. Ned Lamont on Wednesday proposed a pared down health reform agenda that includes new regulations on vaping products, a plan to study what a recreational marijuana marketplace would look like in Connecticut, and a step toward importing prescription drugs from Canada.

Lamont is urging lawmakers to adopt a budget that features a 50% wholesale tax on vaping liquid to match the taxes on other tobacco products and discourage the practice among teens. His proposal also includes a ban on flavored vaping goods, an increase in the penalties imposed for the sale of tobacco or e-cigarettes to minors, and a requirement that schools put lessons on vaping prevention in their health education curriculums.

The wholesale tax on vaping liquid is expected to bring in $600,000 in 2020-21. That amount factors in the loss of revenue from flavored vaping products, which would be pulled from store shelves if the plan is approved.

The governor also suggested a cap on the level of nicotine that vaping goods in Connecticut may contain, at 35 milligrams per milliliter.

Lamont on Wednesday put his support behind legalizing recreational cannabis and said he would work with neighboring states on a “regional approach.” His budget includes $275,362 for two new, full-time positions and a temporary worker to develop regulations for the sale of marijuana.

He’s also looking to form a commission that would study equity provisions – incentives for people in areas where high rates of pot-related arrests have occurred – and issue recommendations to legislators in 2021. Under his plan, sales would launch by July 1, 2022 at the earliest.

“Do you realize that what you can buy legally in Massachusetts – right across the border – could land you in prison here in Connecticut for up to a year? We just marked the 100th anniversary of prohibition. How did that work out?” Lamont said. “That patchwork of cannabis and vaping laws, they are impossible to enforce.”

A portion of the legalization efforts will focus on erasing convictions for possession of less than four ounces of cannabis. 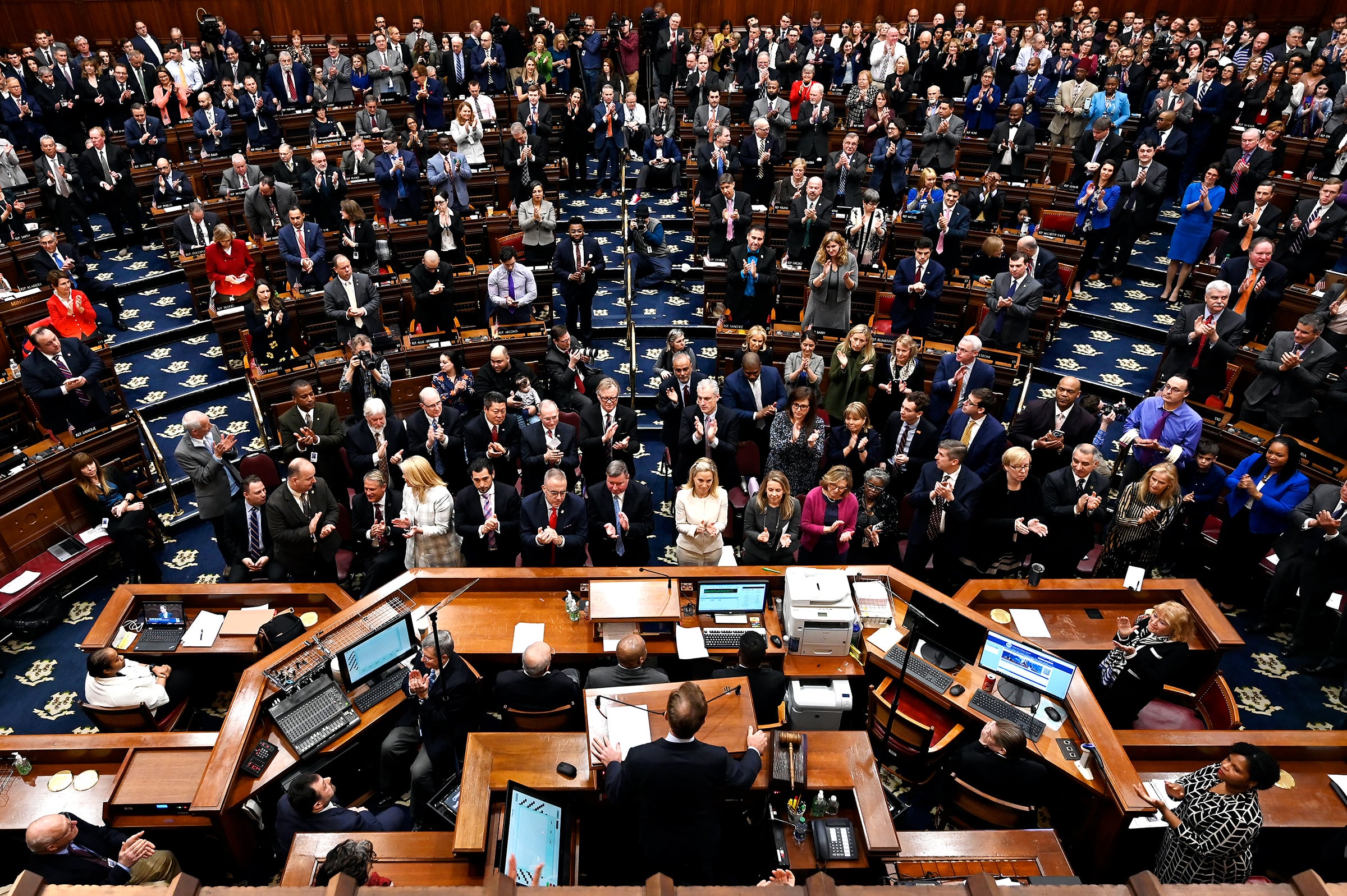 Lamont delivered his State of the State speech during the opening day of the legislative session Wednesday.

“This is an issue, I still believe, if held today in a straight up or down vote, would pass,” House Speaker Joe Aresimowicz, D-Berlin, said, adding that he’s confident Lamont would be willing to accelerate his timetable.

Legislators still must deliberate about regulations for marijuana sales, as well as discuss what economic advantages could be offered to people in communities disproportionately affected by the war on drugs. But these issues could be resolved this session, Aresimowicz said.

House Majority Leader Matthew Ritter, D-Hartford, pointed to nearby states, such as Massachusetts, that already allow sales, and others that are contemplating legalization.

“You can literally drive to other states and buy it,” Ritter said, “and there are many people who are here in this room today who probably do that, and they’re legal-abiding adults. So at some point it’s just insanity.”

The governor on Wednesday also proposed steering $1.5 million to the Department of Public Health to offset some of the federal family planning funds cut by the Trump administration. The money will go to Planned Parenthood of Southern New England and other clinics.

Additionally, Lamont suggested directing more than $400,000 to combatting the uptick of Eastern Equine Encephalitis cases in Connecticut. The state logged four cases in 2019, three of which were fatalities. Before that, only one person had ever died of the disease in the state.

EEE is a mosquito-borne illness, and Lamont’s budget sets aside $150,000 for one full-time and three seasonal workers at the agricultural experiment station and to help boost the number of mosquito trap sites to 107, up from 92. 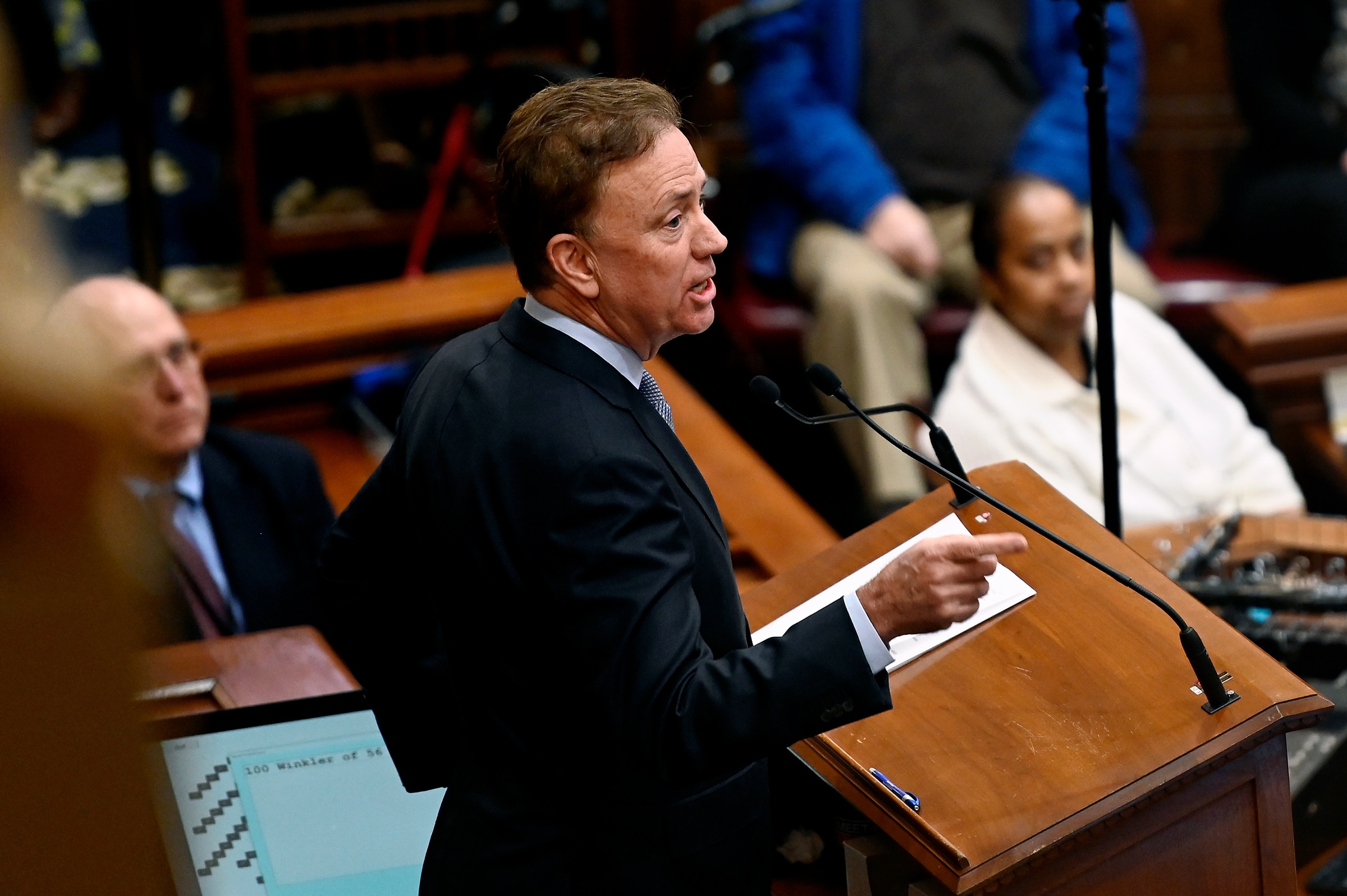 The governor wants to pursue a federal waiver that would allow the importation of prescription drugs from Canada at lower rates.

Lamont included $250,000 for more larvicide spraying and $52,088 for an additional employee at the Department of Energy and Environmental Protection to manage areas that are potential mosquito breeding grounds.

The governor said he also is backing a plan to pursue a federal waiver that would permit the importation of prescription drugs from Canada, though he did not have an estimate for how much the initiative would save consumers. Four other states have passed legislation to seek federal approval for importation – Vermont, Colorado, Florida and Maine – and the Trump administration has taken its first, tentative steps toward allowing the importation of certain drugs.

Nonprofits win some, lose some

The private, nonprofit agencies who deliver the bulk of Connecticut’s social services scored a small victory in governor’s new proposal, but were rebuffed in their major objective – a hefty increase in the budget.

Lamont proposed $25 million in borrowing, both this fiscal year and next, to finance a grant program that helps community-based agencies with capital costs, such as building renovations.

But while there was good news in Lamont’s bond package, his proposed budget did not grant the nonprofits’ request for a major boost in operating funds.

Connecticut spends about $1.4 billion annually contracting with hundreds of community-based, private, nonprofits. Since 2002, state spending for nonprofits has grown by about 10%. After adjusting for inflation, nonprofits say they have lost money.

The CT Community Nonprofit Alliance projects it would take about $460 million more per year in state funding to reverse that damage, and asked Lamont to phase in that increase over the next five years. That’s an average of $92.5 million more in state payments each year.

Gian-Carl Casa, president and CEO of the alliance, said the extra money would allow for capital improvements that couldn’t be done otherwise.The nonprofits absorbed cuts and faced stagnant funding for years while Connecticut struggled with a sluggish recovery from the last recession.

State revenues have grown significantly over the past two years and Connecticut has record-setting reserves.“We’re asking: If not now, when?” Casa said.

Though Lamont’s new budget doesn’t reduce payments to nonprofits, Casa said that “flat funding, when costs and demand rise, is the same as a cut – you simply cannot provide the same services unless funding keeps up.”

The 4.1% rate is the state's highest one-day number since early June. The new seven-day rolling average is 2.5%.

Lamont says a coming COVID surge can be mitigated

Gov. Ned Lamont warns that a COVID-19 surge is inevitable, but adherence to precautions can ease the blow.

Lawmakers say the state should help programs, like higher education, beset by the COVID pandemic. Will the governor agree?

An individual’s right to vote in the upcoming national elections may be compromised if the Trump Administration’s push for privatizing the United States Postal Service (USPS) succeeds. Millions of Americans, including Connecticut residents, will send their ballots by mail this year to avoid any unnecessary and potential exposure to the coronavirus, but undermining the USPS may delegitimize crucial votes.

Abraham Lincoln once said, “I am a firm believer in the people. If given the truth, they can be depended upon to meet any national crisis. The great point is to bring them the real facts.” So, what are the “real facts” for Connecticut’s struggling economy?  Can we even stomach them at this point?

Connecticut’s Health Information Exchange will improve care coordination and make available critically important patient data under some emergency conditions, though it will never supplant the care provided by front-line healthcare workers who are putting themselves at risk every day.

For those responsible for assuring prospering town centers across Connecticut, the coronavirus-altered landscape requires not only revised messaging but a reinvigorated message.  That’s because those receiving that communication will be seeing it through a vastly altered prism.