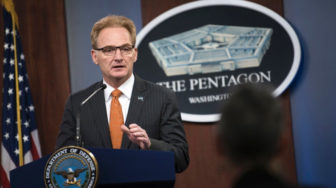 Washington – Navy Secretary Thomas Modly abruptly resigned Tuesday after a growing number of  lawmakers, including Rep. Joe Courtney and Sen. Richard Blumenthal demanded he leave his post in a scandal that has focused attention on how the Pentagon is handling the coronavirus crisis.

Modly fired Capt. Brett Crozier over his leaked plea for help for the sailors on his coronavirus-ridden aircraft carrier, the USS Theodore Roosevelt.

Then he denigrated the captain by telling the ship’s crew that Crozier was “too stupid or too naive” to command the nuclear-powered vessel.

Modley’s treatment of Crozier provoked demands from lawmakers that he resign.

“The Acting Secretary’s behavior and prejudicial comments about Captain Crozier disqualify him from achieving the goal of accountability and rule of law,” Courtney said late Monday. “He should step down from his position as Acting Secretary, and if he refuses to do so, [Defense Department] Secretary Esper should demand his resignation.”

A member of the House Armed Services Committee, Courtney, D-2nd District, said Modly called him last week, before Crozier was stripped of his command.

“I told him it was wrong to do that and a terrible mistake,” Courtney said. “This guy should have been given the benefit of the doubt.”

Yet Modly disregarded Courtney’s advice, and fired Crozier, who is now quarantined with COVID-19. Hundreds of members of his crew have also been diagnosed with the disease.

After firing Crozier,  Modly flew to the USS Theodore Roosevelt, docked in Guam, and used the ship’s public address system to deliver a sometimes profane speech to the crew, criticizing the captain for the leak of a four-page letter asking the Navy’s help for his sick crewmembers. 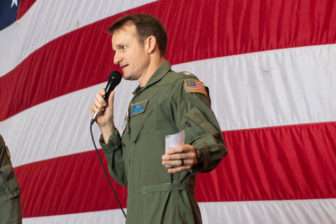 “He flies eight hours to trash the guy who is in quarantine. Who does that?” Courtney asked. “How do you do that to someone,  attack him at a time when he already has been severely punished and can’t respond? That’s a failure of leadership.”

“Modly should be removed unceremoniously for these shocking remarks—especially after failing to protect sailors’ safety & health. He has betrayed their trust,” Blumenthal tweeted Monday evening.

On Tuesday, other members of Congress joined the calls for Modly’s resignation.

House Speaker Nancy Pelosi, D-Calif.  was among them. On Tuesday afternoon she said Crozier was fulfilling his duty to protect his crew.

“Sadly, Acting Secretary Modly’s actions and words demonstrate his failure to prioritize the force protection of our troops.  He showed a serious lack of the sound judgment and strong leadership needed during this time.  Acting Secretary Modly must be removed from his position or resign,” Pelosi said.

Courtney said Modly’s decision to resign “was a necessary step to restore the confidence of every sailor and member of the US Navy that its leadership is committed to their well being.” 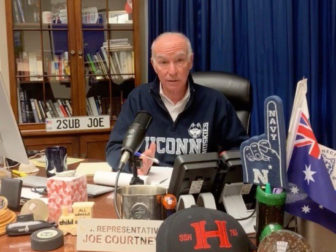 Rep. Joe Courtney rejected Modly’s apology and wanted him gone from the Navy.

The leaking of Crozier’s letter, which described what he said were the Navy’s failures to provide him with the proper resources to combat the virus by moving sailors off the vessel, ran counter to the Pentagon’s policy of keeping information about coronavirus’ spread among members of the U.S. armed forces under wraps.

On March 31, Esper ordered commanders at all installations worldwide to stop publicly announcing new coronavirus cases among their personnel. At that point, the Pentagon had revealed that more than 1,000 U.S. troops and civilians working for the Defense Department had been sickened by the virus.

“The purpose is to make sure that we’re not bringing the virus back home, infecting others, that we’re not spreading it around the military,” Esper said.

No cases at the sub base reported

Courtney said he has recently spoken with Capt. Todd Moore, the commanding officer at Naval Submarine Base New London about coronavirus cases at the facility.

“He said there were no cases where anyone has tested positive,” Courtney said.

Courtney also said he was told the base is screening people and practicing social distancing. The commissary is only serving carry-out meals and the base’s day care center has about 15 children now, instead of its normal 300.

The base has also implemented a policy of having staff work on alternate days, Courtney said.

At Esper’s direction, Modly on Tuesday apologized to Crozier.

“I want to apologize to the Navy for my recent comments to the crew of the TR,” Modly said in a statement. “Let me be clear, I do not think Captain Brett Crozier is naïve nor stupid. I think, and always believed him to be the opposite.”

Modly’s appology came just hours after he said he stood by “every word” of his speech to the crew of the USS Theodore Roosevelt.

Courtney said the apology was not good enough, especially since he fired Crozier without an investigation into an officer with “an impeccable record” who was considered a “rock star” in the Navy.

“We counted the number of times Modly used the word “I” in his speech” to the sailors on the carrier, Courtney said. “It was about 50 times.  It had nothing to do with the safety of the ship. It had everything to do with Modly.”