As it prepares to reopen, Connecticut’s count of COVID-19 deaths is fragmented and incomplete 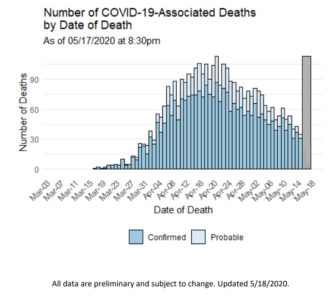 As Connecticut prepares to begin its phased reopening, there is still no clear picture of how many of its residents have died of COVID-19 — the result, at least in part, of a complicated, fragmented  and outdated system of reporting deaths.

Gov. Ned Lamont on Monday said 3,449 people in the state have died of the virus, but that preliminary number may not count all of the most recent deaths. In fact, the governor recently said the daily death toll he announces “reflects, I’m afraid, things that were happening some weeks ago.”

New York and New Jersey’s death counts have dropped since their peaks about a month ago. But that trend is not apparent nor verifiable in Connecticut because of flaws and delays in the state’s COVID-19 death reporting system.

To determine the official COVID-19 fatality count, the state relies on death certificates sent in by each of Connecticut’s 169 towns. It also compiles information supplied daily by some of the state’s hospitals, nursing homes and funeral directors, but that information is preliminary.

Death certificates are the official record. Those certificates, filled out on paper by hospitals, doctors or nursing homes and funeral directors, may take days to be completed and forwarded to the state.

Nicole Paquette, past president of the Connecticut Funeral Directors Association, said it takes an average of five days for all the information on a death certificate to be collected. The death certificates are then sent to a city or town clerk’s office, or its office of vital records, and in most cases are mailed by that office to the Connecticut Department of Public Health. The process can take days – or more than a week.

On March 24, when the first Connecticut COVID-19 death was reported, Connecticut cities and towns were required to send DPH all death certificates once a month. In early April, as health officials scrambled to assess the pandemic’s impact and reach, the Department of Public Health issued a directive mandating reporting once a week.

“We have been trying to do that,” said Patty Ulatowski, manager of the Office of Vital Records in Bridgeport. “We put them in an envelope and send them to the state.”

Ulatowski said smaller towns, those without hospitals or nursing homes, may be able to process the death certificates more quickly. “But we have a lot of deaths and we’re not always able to.”

Connecticut is among a handful of states that does not use a computerized system for death certificates, although it’s working to have one up and running, possibly by July 1.

In contrast, New York requires all fatality data to be reported by hospitals, nursing homes, and other health care facilities on a daily basis to the New York State Department of Health though its Health Emergency Response Data System, (HERDS) a computerized tracking program.

There are other hurdles to quick and accurate reporting of COVID-19 deaths in Connecticut, as well.

Because of the pandemic, some town offices have limited their working hours, causing additional reporting delays. Others are understaffed. For example, Westport’s town government is now run by a “skeleton crew,” said assistant town clerk Ruth Cavayero.

State figures show Stamford has had 175 COVID-19 related deaths since the pandemic began. But local officials, who have been swamped with death certificates while forced to cut staffing to comply with social distancing, question the accuracy of that number.

That town’s records show that in April of previous years, Stamford typically processed about 50 death certificates. But last month, the town processed 223. Of the additional 173 deaths, only 121 were marked as coronavirus-related. That would mean the non-COVID 19 death count doubled from 50 to 102 from the previous year.

“We have known from the beginning, that there were so many more deaths than reported,” said Lyda Ruijter, the city’s town clerk. “I keep saying, ‘Oh, these numbers are bogus, because I see in my office how busy we are.’”

Many of Stamford’s April deaths occurred before local officials had the testing capacity to confirm a death was COVID-19 -related. Neither had they yet received guidance from the Centers for Disease Control and Prevention on allowing certain deaths to be presumed COVID-related without a test.

Meriden also saw the number of reported deaths spike; from roughly 50 in the typical April to 111.

In Meriden where the state has reported 55 deaths, the sharp increase in the number of bodies at funeral parlors has slowed the town’s fatality count, said Denise Grandy, the town clerk

“There’s such a long lag on them because the crematories are so backed up that we’re still waiting for a lot of them to come in. So we can’t verify that they are COVID tested until the death certificates come in,” she said. “There’s a backlog.”

When an employee tested positive for the virus, Hartford’s  Bureau of Vital Records, which processes the city’s death records as well as marriage licenses and burial permits, was forced to close on May 8. It won’t reopen until May 22. The state DPH and officials from the town of Windsor are trying to take over the functions of the now-shuttered bureau.

As another source of delay, sometimes death certificates mailed to the Department of Public Health are missing information and must be sent back to municipal officials for completion and re-submission. Ulatowski, in Bridgeport, said she receives eight or ten of these incomplete reports each month.

The state does at least have other sources of information about COVID-19 deaths. Hospitals and funeral directors are required to report people suspected of succumbing to the disease directly to the Office of the Chief Medical Examiner. They are also required to immediately report any suspected COVID-19 deaths to the Department of Public Health. 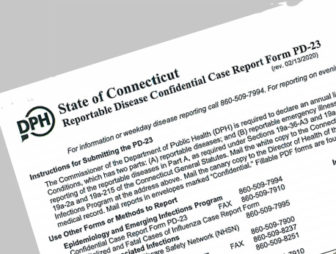 Instructions on the DPH form used for providing information on reportable diseases, including COVID-19.

“We do not wait for the death certificates to be entered, but they sometimes contain data that we may not get on the case reports that we receive,” Cartter said.

​But the state medical examiner does not necessarily have all the information on COVID-19 deaths, either. “All suspected or confirmed COVID deaths should be reported to the OCME. They are not,” said James Gill, the state’s chief medical examiner. The paper documents mailed  to the Department of Public Health, said Gill, are the final word on COVID-19 deaths. “Ultimately the number of COVID deaths that occurred in Connecticut will be based on the death certificates which will come from vital records,” he said.

For preliminary purposes, the Department of Public Health cross references all the information from various sources to make sure it’s accurate, said Diane Aye, chief of the DPH Health Statistics and Surveillance Section. She said “there’s a little bit of a lag,” but her agency is “trying to get [fatality information] to the governor as quickly as possible” and is reaching “real time.”

Still, Aye said, “we understand that [the system] is not ideal.”

Because of the potentially weeks-long lag time in reporting some COVID-19 deaths, Lamont said “compared to hospitalizations and testing and personal protective equipment” the COVID-19 death count is not one of the “seven metrics” used to weigh how fast the state can reopen.

Instead, the state is relying on other guidelines. Those include a 14-day decline in the number of hospitalizations, increased testing availability and sufficient contract tracing capacity – or the ability to track all people who have come in close contact with someone who’s become newly infected.

Connecticut also wants to make sure there is enough protection for high-risk populations, adequate hospital and health care capacity and it wants to ensure  appropriate social distancing can take place before the state relaxes coronavirus restrictions.