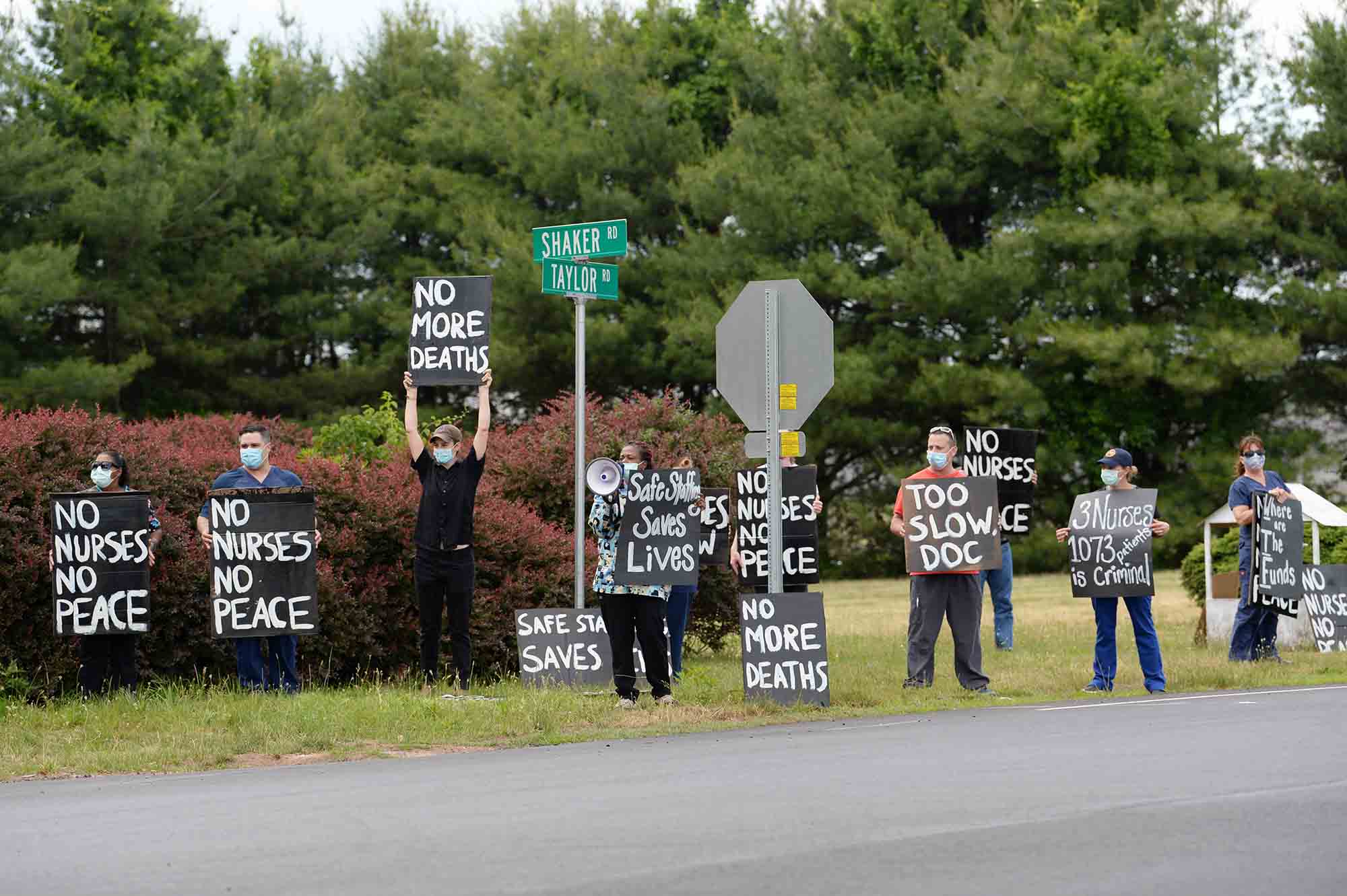 Indria Mitto, a nurse at Osborn Correctional Institution, uses a megaphone to chant, “What do we want? Nurses! When do we need ‘em? Now!” during a protest with other SEIU 1199 union members over staffing concerns at the facility, on the corner of Shaker and Taylor Roads in Enfield, June 15, 2020.

A year-long shortage of nurses at the Osborn Correctional Institution in Somers has become an even more pressing problem with the onset of COVID-19, the union representing the nursing staff says.

Minimum staffing levels dictate that three nurses be scheduled for the overnight shift — from 11 p.m. until 7 a.m. — but personnel scarcity has forced the Department of Correction, when necessary, to schedule two health care professionals instead. This leaves just two people responsible for the medical care of the 1,048 inmates incarcerated there.

“Serious medical episodes happen in the nighttime, in that rest period, especially with the elderly-aged population, or people with underlying medical conditions,” said Gabby Bottino, a licensed practical nurse at Osborn who normally works the morning shift.

Union members rallied at Osborn Monday afternoon to draw attention to the staffing issues and propose potential solutions. They’re demanding the DOC institute recruitment and retention stipends for Osborn nursing staff and offer 12-hour shifts so employees only have a three-day work week, which they argue would incentivize people to apply for the vacant positions. They’re also calling on the department to increase the minimum number of nurses on the overnight shift to four so staff aren’t spread so thin.

Though the overnight shift stretches through the wee hours of the morning, there’s a significant period where inmates are awake, said Michelle Cyr, a a licensed practical nurse at Osborn who normally works the 3 to 11 p.m. shift. Incarcerated people usually wake up around 4 a.m., she said, eating breakfast an hour later.

That means overnight nurses are required to administer care for Osborn’s diabetic inmates every morning, a critical duty that is harder to complete if there’s any sort of unrest in the prison – or if it’s short-staffed.

“When you have two nurses to handle well over 1,000 inmates, if anything like that were to occur, it’s very strenuous, it’s very dangerous for the staff that’s there,” said Cyr.

What’s more, nurses assigned the overnight shift are regularly being required to work a second, until 3 p.m., Cyr said, potentially compromising the quality of medical care that inmates receive because staff are exhausted.

“You’re not at your full capacity when you’re not getting rest, which, in turn, can impair their judgement,” said Cyr.

The department has long had an issue with recruiting and retaining medical professionals to work in its 14 prisons. There are currently 112 vacant health care positions.

More than one-fifth of the openings – 24 – are at Osborn, and more than half of those vacancies are for nurses. The current staffing allows for one nurse for every 33 inmates, a larger caseload than would exist under a full nursing roster.

DOC Commissioner Rollin Cook, who resigned from his position effective July 1, said filling vacant health care positions has been among his top priorities since he took over the position in early 2019. The DOC employs more than 70 health services staff than it did a year ago, with 40 people hired since March 1, a date Cook has pointed to as the onset of the pandemic.

“Even after my departure, I am certain that the Agency will continue its extra efforts in support of our health services employees through collaboration with the union to continue to improve the quality of the offender healthcare system,” said Cook, adding that 11 health care vacancies at Osborn are in the final stages of the hiring process.

“To be sure, it is difficult enough to attract qualified candidates during these trying times, especially when the healthcare workers’ union’s leadership (local 1199) strategy to attract workers is to publicly complain about their working conditions, and unjustly claim that our administration is taking no action to address this critical issue,” Cook said. “I do not understand the union’s strategy, which I feel is counterproductive at best, especially at a time when frontline health care workers are being deservedly lauded for their heroic efforts during the pandemic.”

The shortage has been even more apparent since COVID-19 began sweeping through Osborn, Bottino said, because staff have to check inmates’ vitals, do nasal swabs to test for the virus and deliver medication to the units.

“It puts more work on the short staff that we already have,” said Bottino.

Osborn was put on lockdown last month after 105 asymptomatic inmates there tested positive for COVID-19. Six of the seven prisoners who have died from the virus were held at Osborn. More than 250 people incarcerated at Osborn had tested positive for COVID-19 as of Friday, though 440 inmates opted out of testing when officials swabbed everyone last month.

Osborn houses nearly 100 inmates over aged 60, including Francis Clifford Smith, 95, the oldest incarcerated person in Connecticut, who has been serving a murder sentence since 1950.

“Anyone who’s done 20, 30 years is going to end up at Osborn eventually because they’re older – they’re not getting in trouble like they were back in the day,” she explained.

Members of the incarcerated population are concerned about the shortage of healthcare professionals as well. In two separate letters written to Gov. Ned Lamont in May that were also sent to The Mirror, Thomas Browdy, a 62-year-old man incarcerated at Osborn for a three-year forgery sentence, said he was worried his underlying medical conditions would put him at risk of death should he contract the virus.

“The governor’s office has consistently informed the public it is releasing older inmates, low-level offenders with underlying medical problems. In my case, that is not true,” Browdy wrote. “Connecticut’s health care system does not have the capacity to treat an outbreak of COVID-19 in prison, and Osborn’s medical services is not equipped [sic] to handle an outbreak of COVID-19 it is experiencing now.”