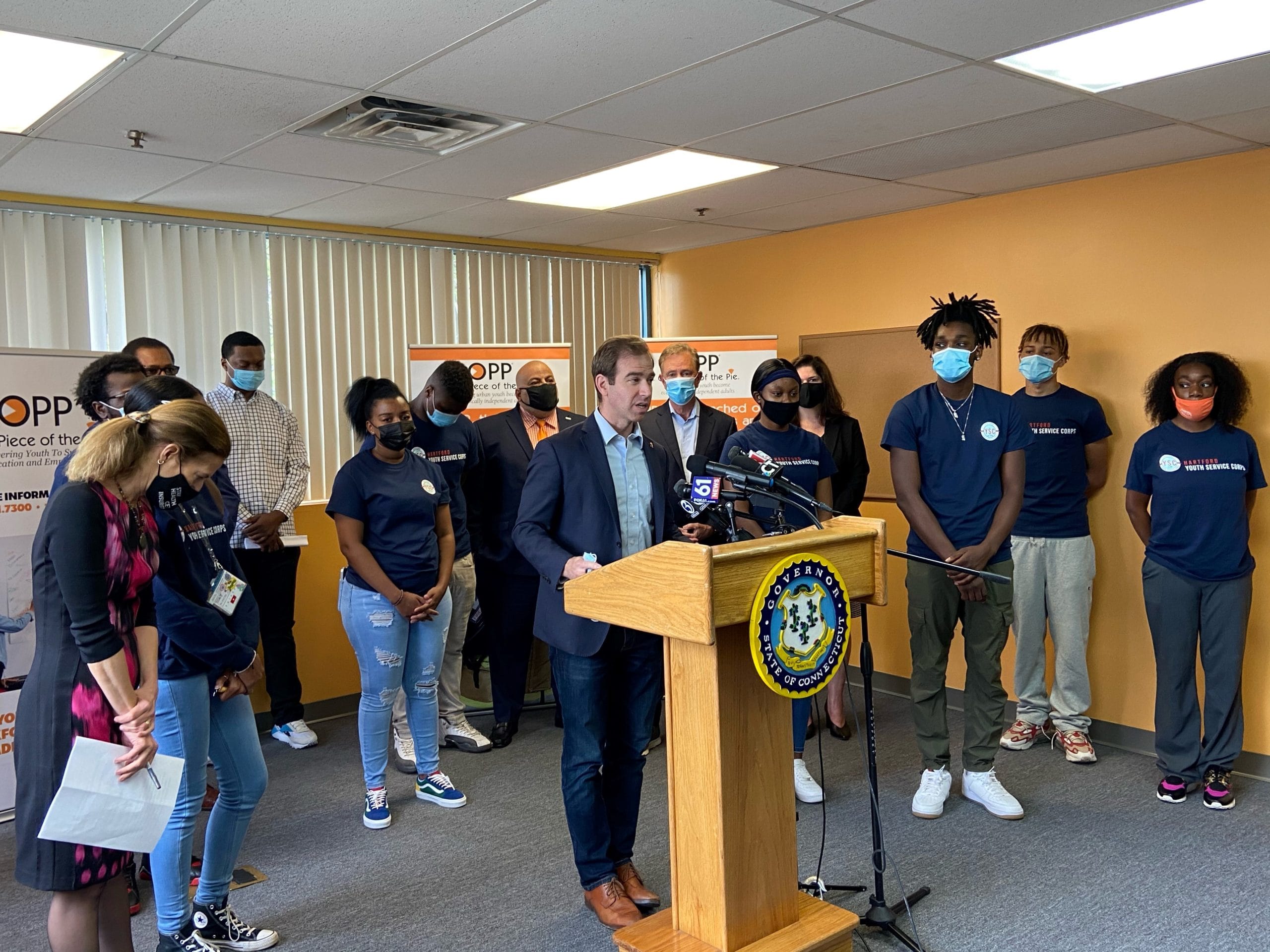 Hartford Mayor Luke Bronin speaks at an announcement of a $7.7 million investment in the Connecticut Youth Employment Program.

Gov. Ned Lamont announced Thursday that $7.7 million will be invested in the expansion of the Connecticut Youth Employment Program, which assists youth in their search for employment and connects them with a vast network of organizations.

The Coronavirus Aid, Relief and Economic Security (CARES) Act is providing $2.5 million, and the state recently invested another $5 million. Under the American Rescue Plan, which directs funding toward the economic recovery of the state from the pandemic, an additional $2.5 million will be invested every year for the next three years toward youth-serving organizations, as well as an additional $1 million toward youth employment, Hartford Mayor Luke Bronin said.

“One of the most important things we can do in this state is prepare the next generation for work, for meaningful contributions to our community and to our economy, and for building the lives that they want to lead,” Bronin said.

The $2.5 million will go to mental health training for employment specialists and education workers, transportation and food assistance.

Officials emphasized the connection between education and economic recovery during the announcement, which was held at Our Piece of the Pie, a nonprofit youth employment organization in Hartford.

OPP’s interim CEO and Chief Operating Officer Hector Rivera noted the importance of providing resources to youth in Hartford and the eastern region of Connecticut who are in need of work and education opportunities.

“Our values here at OPP are straight forward: Achieve a high school diploma, achieve a post-secondary degree or vocational credential and secure meaningful employment at a sustainable wage,” Rivera said.

Department of Children and Families Commissioner Vannessa Dorantes spoke about the opportunities the expansion of the program will generate.

“These are my people, and they are the next-ups,” Dorantes said. “So it’s my job to make sure that we are not just keeping the seat warm but we are providing them with opportunities to learn time management, critical thinking, budgeting, responsibility, all of that that’s right inside of them that they are ready to be able to unleash onto the world.”

For the youth of Hartford and eastern Connecticut, organizations like OPP are one of the only ways they find their passion and become motivated to pursue a career, officials said.

Jermaine Stance, an alum of OPP, told his story of being a young Black man who grew up in a poor community in Hartford.

“I go outside of my house, I don’t see people going to work. I don’t see people with direction. I see poverty,” Stance said. After seeing a newspaper ad in 2016 for jobs offered through OPP, Stance found work at The Salvation Army, where he helped underprivileged kids with homework at an after-school club for a year.

His youth development specialist supported his attendance at community college and helped him get his driver’s license, and next year Stance hopes to graduate with a degree in sociology and a minor in psychology, he said.

Lamont praised the expansion of the program and of the free summer learning camps operating in partnership with more than 250 not-for-profits.