To vaccinate young adults in CT, Lamont turns to the concert scene 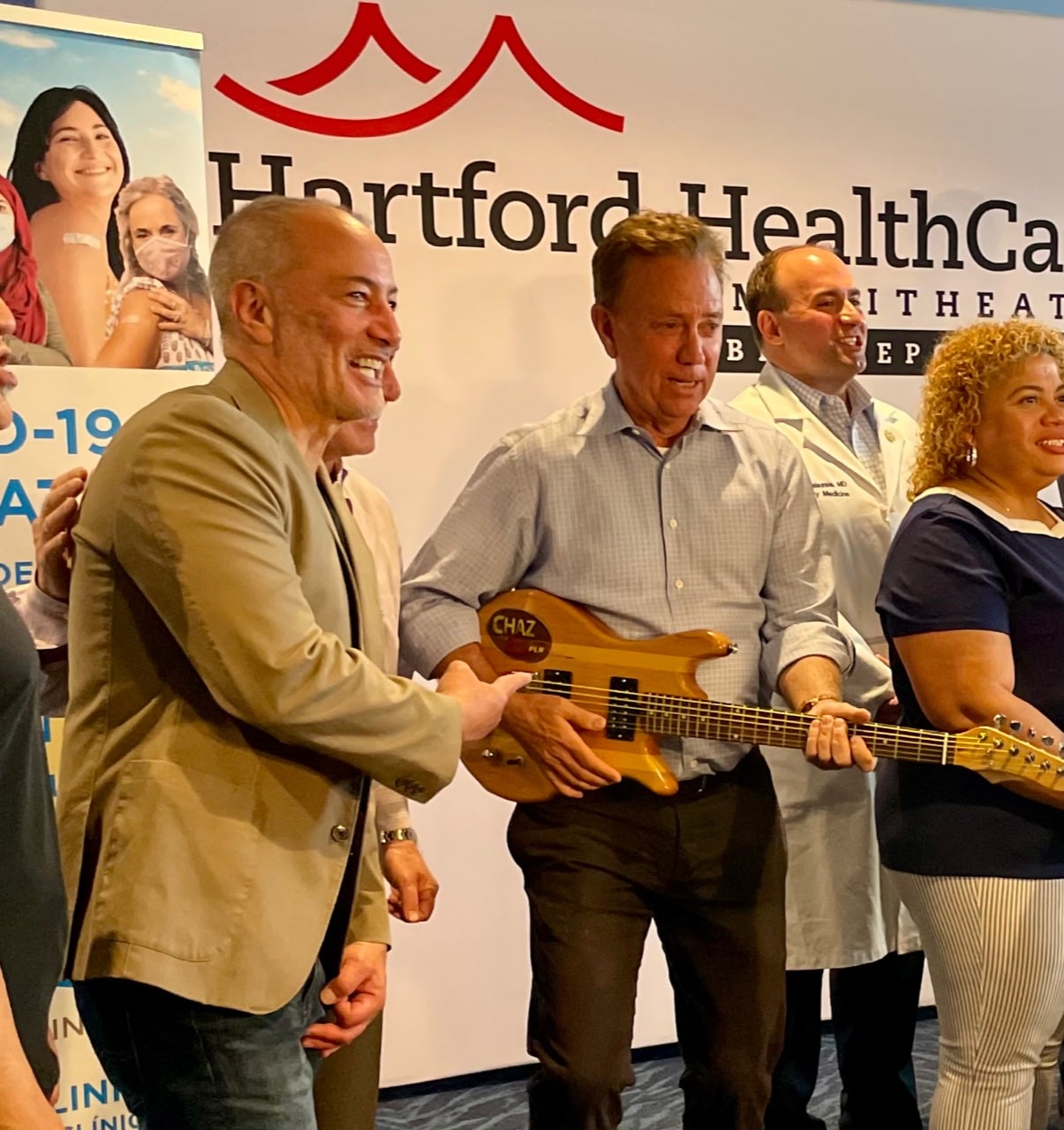 Chaz of WPLR’s “Chaz & AJ in the Morning” enjoys Gov. Ned Lamont playing with, though not playing, the branded guitar the DJ brought.

BRIDGEPORT — Jim Koplik has promoted the Rolling Stones, McCartney and Springsteen over the years. On Friday, in partnership with the self-described “concert kid” who’s now governor, Koplik took a crack at Johnson & Johnson, Moderna and Pfizer.

A state with one of the most successful COVID-19 vaccination campaigns, Connecticut kicked off a summer of trying to reach the least-vaccinated demographic — the under-35 crowd, with more than 500,000 people still eligible for vaccinations.

If you want to promote, get a promoter.

A single synergistic press conference Friday promoted many things: the opening of Bridgeport’s new concert venue, the Hartford HealthCare Amphitheater, on July 28 (coincidently, tickets go on sale today for REO Speedwagon and Styx); WPLR’s “Chaz & AJ in the Morning”; several hospitals; and some folks looking at re-election in 2022.

Oh, and Rock the Shot.

The administration of Gov. Ned Lamont is working with Koplik, a variety of country and hip-hop artists and the mobile vaccination program operated by Griffin Health to promote vaccinations with a chance at free tickets, plus a free vaccination on the way into the show. Their backup included Lt. Gov. Susan Bysiewicz, U.S. Sen. Richard Blumenthal and Mayor Joseph P. Ganim, who arrived in boots and a black cowboy hat.

Anyone 18 and older who has received at least one vaccine shot can enter weekly drawings for pairs of concert tickets to be held on Thursdays, beginning July 8. The first 24 people to get vaccinated at select clinics will get free tickets, as well.

To enter, go to ct.gov/rocktheshot. Available concerts are listed, and more will be added. 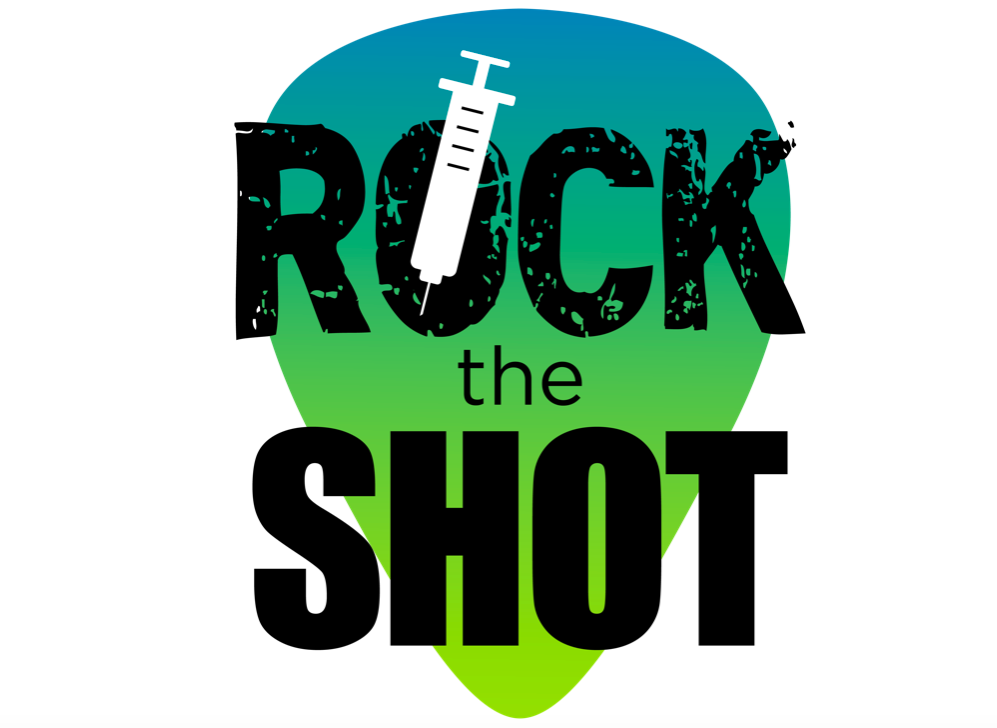 They have a logo. No word on T-shirts.

The kickoff Friday was at the amphitheater being constructed on what once was a minor league baseball park, The Ballpark at Harbor Yard. The 5,500 seats remain. A stage covered by a soaring superstructure, which eventually will be covered by a fabric roof, sits on what used to be outfield grass.

The press conference was delayed a half-hour as Koplik and Howard Saffran, the principal owner of the theater, gave a backstage tour to Lamont, who signed a marijuana legalization bill Tuesday likely to win him some friends among concert goers.

The governor, who claims a certain youthful familiarity with concerts at Fillmore East and Madison Square Garden, seemed star-struck.

“Howard, this place is the best. I love this amphitheater. It's incredible, right here in Bridgeport, right here accessible to everybody,” Lamont said. “Jimmy's got the most amazing collection of concerts gonna be coming up, starting this year and then next year. They will knock your socks off.”

Chaz & AJ, who brought the governor a WPLR-branded electric guitar as a prop, seemed amused. The radio duo was partial in 2018 to Lamont’s opponent, Bob Stefanowski, who delivered his concession speech live on their show. Everyone was friendly Friday.

“The governor is having a week he hasn't had since college — weed on Tuesday, concerts on Friday,” said Chaz, the DJ who goes by the single name professionally.

Lamont can claim a connection to concert lore, however modest. As a 17-year-old, Lamont contributed to the ambient sound on "At Fillmore East," the Allman Brothers Band's live album. He was in the audience when the album was recorded in March 1971.

“At the Hartford HealthCare Amphitheater, we are proud to be part of Rock the Shot,” Saffran said. “We believe that it is so important to get to the youth of Connecticut, and Jimmy has absolutely created — Jimmy and his son, Jeremy Koplik — have created a 25-concert schedule that should interest 18- to 35-year-olds.”

Boomers, Speedwagon and Styx are not part of Rock the Shot.

Wrong demographic, noted Koplik, who still has his generous mustache and thick head of hair, though both are pure white. The target crowd wants country or hip-hop. Koplik books 'em, but don’t quiz him on the lyrics.

Charmel, who shrugged at delivering his remarks while standing before a Hartford HealthCare logo, said public health has to compete with social media to debunk myths about the vaccines, including the viral falsehood they affect fertility.

“It was never true. It's not true,” Charmel said. “There are men out there, young men, concerned about their fertility, and somehow that the vaccine affects sperm production,” Charmel said. He paused, then added, “I bet you didn't think you were going to see the mayor in a cowboy hat and me talk about sperm today.” 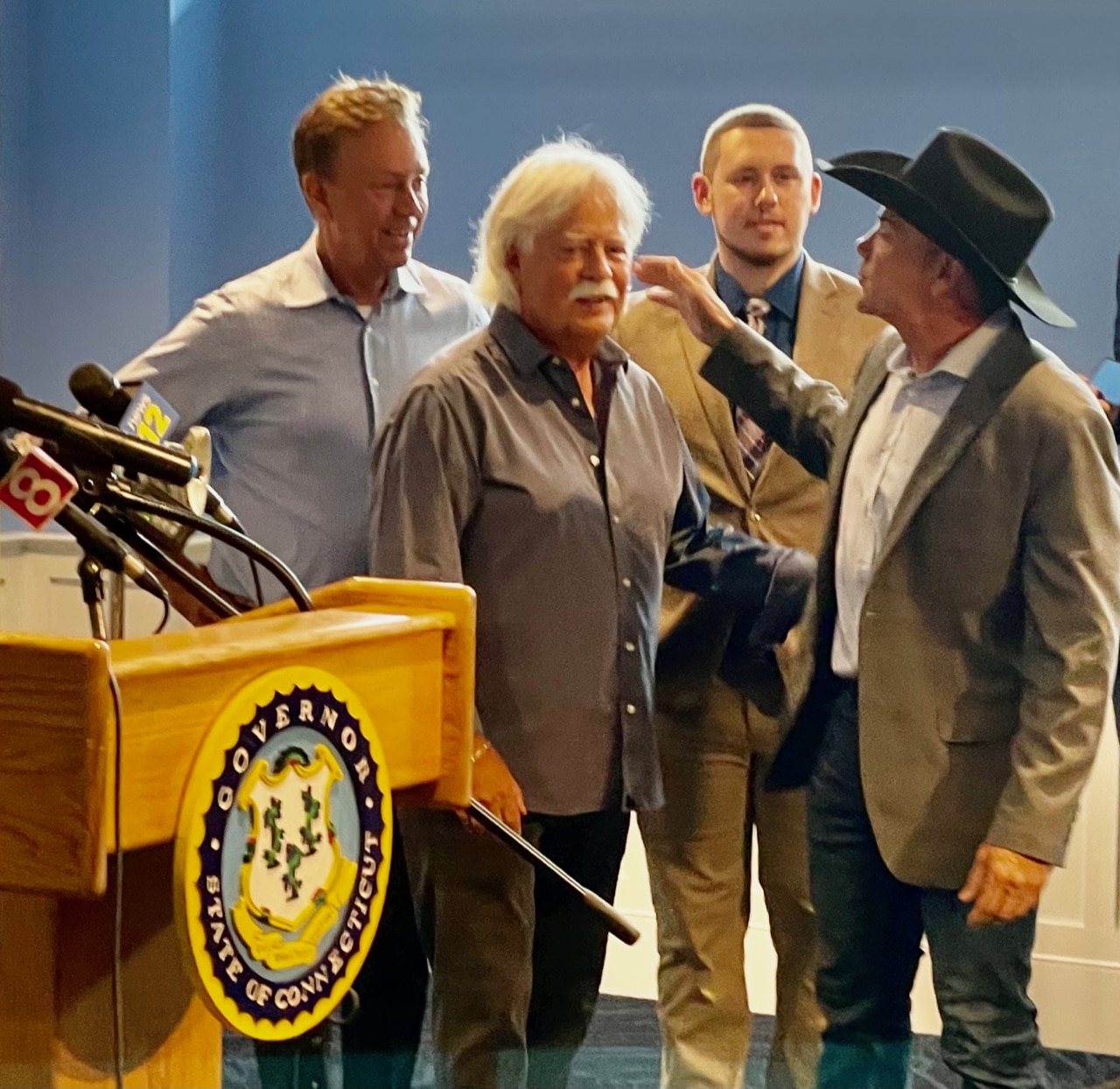 “But, by the way, if you get COVID-19, you get a fever for 10 to 14 days. It kills a lot more sperm, right?” he said. “These are the things that are a little uncomfortable to talk about. But we need to talk about them if we're going to get to this population.”

Two concert venues associated with Koplik, the Toyota Presents Oakdale Theatre in Wallingford and the Xfinity Theatre in Hartford, offered themselves as vaccination sites.

“I've been in the content business for 52 years, but I was in the vaccination business for one year. And I'm finally glad that we're getting near the end.”

Koplik said the governor’s management of the pandemic has contributed to his return to his day job, promoting concerts.

“The governor … made me look really good to my company, because Connecticut opened up so early compared to most other states. And I got the credit for it. So thank you,” Koplik said, turning to Lamont. “So I appreciate that. But then they put me in charge in New York, and I kind of screwed that up."

"Something I probably shouldn’t have said.”

Before they left, they posed for photos that will go up on social media. Lamont wielded a guitar branded with a single word, "Chaz." The DJ smiled and pointed.

Advocates say some developmentally disabled people have struggled to get vaccinated. A federal grant is paying to address the problem.