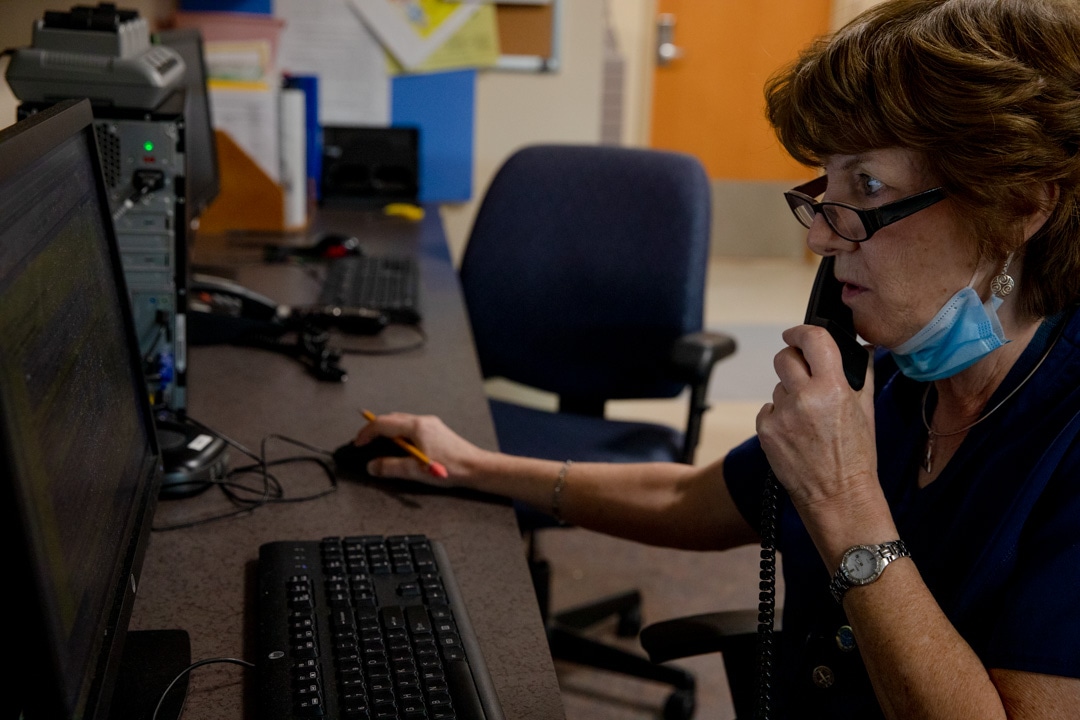 Laurie Grady, a registered nurse, talks to a patient on the phone at Bristol Hospital.

Connecticut has no statewide standards for the way its medical facilities gather, report and use patient data on race, ethnicity and language – an important step in addressing equity in health care, according to a new report commissioned by the Connecticut Health Foundation.

Advocates have cautioned that collecting data on race, ethnicity and language won’t by itself solve health disparities, but by gathering and analyzing the information, providers can target gaps in care experienced by people of color.

“We can’t address what we don’t measure,” said Tiffany Donelson, president and CEO of the Connecticut Health Foundation. “Having reliable, self-reported [race, ethnicity and language] data is critical to identifying problems and developing interventions that can benefit everyone. We know from other states that REL data can lead to better care and reduce inequities, and we are eager to work with health care providers, advocates, state agencies and patients to move this forward in Connecticut.”

For years, advocates in the state have pressed for better data collection. While many Connecticut health care systems do collect some of this data, the level varies, and fewer organizations are using the information to address care, the Health Foundation noted in its report.

Most of the race-related statistics gathered in the state – from Medicaid enrollment to the uninsured population – show health outcomes for Black, Hispanic, Asian and white residents. Those broader categorizations mask disparities that affect residents of certain races and ethnicities. For example, diseases that disproportionately impact Puerto Ricans or Mexicans may not register in data that cover Hispanics more broadly.

“While public health data clearly document worse health outcomes for people of color, most health systems and other care providers do not consistently track data on patients’ self-reported race, ethnicity, or language preference (REL) to find inequities or intervene when changes could make a difference,” the authors wrote in the Health Foundation report. “The lack of standardized data can be particularly challenging for ethnic or racial groups with smaller populations, including Asian Americans and Native Americans, whose population-level outcomes are often not even reported in public health data.”

Last month, the General Assembly gave final passage to a bill that, among other things, requires improved collection of race, ethnicity and language data among state agencies, boards and commissions. Those groups must now gather the information in a way that allows for aggregation and disaggregation; offers the option of selecting one or more ethnic or racial designation and include an “other” designation with the ability to write in identities not represented; and ensures that, in cases where data concerning a person’s race or ethnicity is reported to any other state agency, such data is neither tabulated nor reported without the information on race and ethnicity. The bill lays out several other mandates for the data collection.

As Connecticut prepares for changes in how it gathers the data, the Health Foundation laid out an overview for improving collection, analysis and use, drawing upon examples from other states.

Some of the examples in other health systems include:

The report also examined some of Connecticut’s health systems. Hartford HealthCare plans to use race, ethnicity and language data as it assesses readmissions and patient experiences. The system recently added more granular fields and is training staff to answer patient questions. At Yale New Haven Health, data collection occurs but it is inconsistent, and in some cases, the accuracy is unclear, the report states. The health system is beginning to collect REL data in certain clinics, including one focused on hypertension.

To ensure better data collection and use going forward, the Health Foundation recommended that health care providers and state agencies:

For state agencies, boards and commissions, the improved data collection must begin by Jan. 1, 2022.

Editor’s Note: The CT Mirror is a grantee of the Connecticut Health Foundation.