History echoes in the Trump administration’s  ban on travelers from seven Muslim-majority countries and on refugees especially from Syria (with exemptions for those facing “religious persecution” sure to favor non-Muslims).  Our nation of immigrants has withstood periodic spasms of xenophobia – including creation of the “Asiatic Barred Zone” a century ago.  We must recall these errors to endure this era, too.

A popularly elected President Franklin Roosevelt said, amid the depths of the Great Depression in 1933, that “the only thing” the United States had to fear was “fear itself.”  He contended with “America First” isolationists, condemned as such by a bipartisan consensus in subsequent decades.  After the Japanese attacked Pearl Harbor in 1941, FDR called December 7 a day that would “live in infamy.”

A troubling anniversary, part of a trend

That day, Congress overrode President Woodrow Wilson’s veto in order to erect the Asiatic Barred Zone as part of a nationalist frenzy that had grown from the anti-Catholic “Know Nothings” to the 1882 Chinese Exclusion Act and 1905 formation of the Asiatic Exclusion League.

As a million immigrants per year arrived in the U.S. in the early 20th Century, their increasingly Eastern European and Jewish ancestries were perceived as a threat by many Americans whose families had arrived previously.  Anti-Asian, not to mention anti-African and anti-Native American, biases were even sharper.

The trend would culminate in a 1924 immigration law that established entry quotas based on the ethnic composition of the U.S. in 1890 and 1920.  Racial exclusion of immigrants didn’t end until 1952; strict national quotas were changed only by the transformational Immigration and Nationality Act of 1965 (when immigrants from the Western Hemisphere actually encountered quotas for the first time). [See, for example, pages 3-16 of The Other One Percent: Indians in America.]

After Pearl Harbor, internment of Japanese Americans was a stain on the 20th Century as segregation was until the Civil Rights movement – to say nothing of the sins of slavery, Jim Crow and lynching, and atrocities against Native Americans, in earlier U.S. history.  But as the current White House executive actions halt immigration from Iraq, Syria, Iran, Sudan, Libya, Somalia and Yemen – with extra hurdles blocking Syrians and refugees generally – let’s return to events one hundred years ago.

Two months after the February 1917 establishment of the Asiatic Barred Zone, the U.S. entered World War I against Germany.  Then German Americans became a persecuted minority.  Perhaps an understandable fear of such persecution was an additional reason the Trump family, of German origin, would pretend to be of Swedish descent — which they purportedly did to boost their real-estate business with Jewish families in New York.

Now, a century later, a descendant of Irish and Polish immigrants is among the members of Congress resisting the Trump administration measures.  Sen. Chris Murphy (D-CT) said, “President Trump’s divisive policies that build walls and take money away from local police do nothing to make us safer.”  He asserts, “America’s greatness is rooted in our immigrant history, and those who try to turn our country against immigrants are preying on the worst kind of prejudice.”

In a bill he introduced January 30, Murphy “would withhold any funding to enforce the executive order and declares it illegal based on the 1965 Immigration and Nationality Act.” His news release continues: “immigration based on religion violates the U.S. Constitution and fuels ISIS recruitment propaganda, putting our nation at risk.”

Like many others, he’s concerned ISIS will now more persuasively claim “that America is at war with Muslims, especially those Muslims living in desperate circumstances…. The work we have done to cut down on extremist recruitment at home and abroad” will be jeopardized.  The order is the wrong remedy.  As in the past, “We can protect ourselves from terror and rescue others from terror — these are not mutually exclusive ends.”

As it is, the order will disproportionately affect acutely vulnerable children.  Is this the kind of country we are?  Is that what voters support?

Some show ambivalence, for example, toward Latino Americans – whose work is often exploited while they are made, in certain communities, to feel unwelcome.  President Obama’s Deferred Action for Childhood Arrivals (DACA) was a pragmatic half-measure until comprehensive immigration reform might emerge, as are the opportunities for striving “dreamers” who succeed in school or the military.

Speaking of military service, the late son of Khizr Khan – who came to fame brandishing a copy of the Constitution – gave his life to defend this country.  Few xenophobes would fare well in a popularity contest with the “Gold Star” Khan family.  Popularity aside, this is a matter of adhering to the nation’s values and securing them effectively.

Queens, the New York borough where Donald Trump grew up (in Jamaica “Estates,”) is now among the most successfully diverse places in the world.  It’s therefore a microcosm of the plural dimensions of the U.S. that help make this nation great, despite its divisions.  German Americans no longer face discrimination.

Yet others still do, whether through hate crimes, subtler forms of bigotry, or the kind of dangerously blunt instrument the White House now presents.

As suggested in an October 2015 piece about refugees, they have had a benign impact on the U.S., including my hometown.  “Refugees and other immigrants haven’t hurt New Haven (which since 2000 has enjoyed population growth substantially due to immigration).  Most work hard … contributing to our community and its economy.  My children attend public school with refugee kids who are eager to learn…. The father of one of my daughter’s best friends is from Syria.”

That girl joined us for dinner recently, lamenting that her Syrian grandfather (who has also been in our home) may not be able to visit again.  Of course he’s harmless.  But he’s harmed, as are his American family and our national interests.

Globally, moral authority is real; “soft power” can combine with coercion to make “smart power.”  Despite the mixed record of the U.S. toward immigrants —including those fleeing Hitler, more of whom should have been saved, and the exclusionary tendencies outlined above — in many respects Americans can be proud.  We continue greatly to benefit from immigration (including of refugees). Some 14 percent of Americans are foreign born; a quarter, myself included, are either immigrants or their children.

It bears repeating: I respect but don’t fear Muslims; I married a woman of Muslim descent.  To know people ostensibly different from us is to appreciate their humanity. 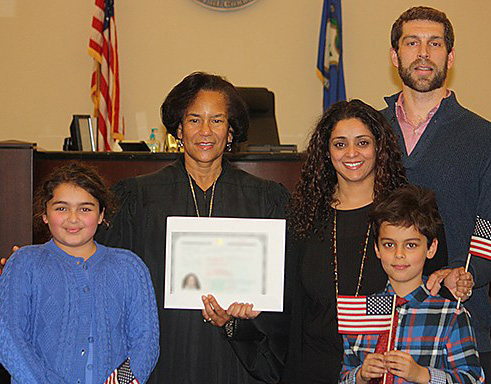 The author, his wife, Sahar Usmani-Brown, their children and Judge Vanessa Bryant at Sahar’s naturalization ceremony.

To become a naturalized U.S. citizen, my wife – an immigrant from India – had to submit years of U.S. tax returns as well as pass a civics test that emphasizes the Constitution as the highest law of the land.

Absolutely, the U.S. should vigorously address its socio-economic inequalities and invest far more in its physical as well as human infrastructure.  We can’t invite all the world’s refugees – let alone everyone in the broader category of migrants – to the U.S.

But the U.S. isn’t weak, and religious tests are unconstitutional.  Let’s not fear.  Let’s not make apocalyptic prophecies of a “clash of civilizations” self-fulfilling.  Americans have the power to protect our nation, its institutions, and its values.  Let’s get to work.

This February 5, 100 years after the infamous passage of a hateful immigration act over President Wilson’s veto, an annual Run for Refugees – benefiting Integrated Refugee and Immigrant Services (IRIS) – will begin today, Super Bowl Sunday, in New Haven.  Following the run this year will be a march, in the spirit of what Gandhi called “satyagraha” or “truth force.”

Truth is needed.  Fellow Americans, let’s demand it – and defend our Constitution.  From the First, 14th, and 25th amendments to the emoluments clause and far beyond, fundamentals are at stake.

A propagandist habitually repeats the phrase “our country.”  That shouldn’t become an epithet.

Yes, this is our country – not just a country for white people, or for people whose families came here a few decades back or more, or for immigrants who happen to arrive while working in the fashion industry.  This country belongs to people of all backgrounds, of every religion or lack thereof.  We won’t relinquish our country easily.

Josiah H. Brown lives in New Haven.  His prior viewpoints have addressed topics from demography and the electorate, history and civics, the U.S. Constitution and public lands, to guns and security, refugees and immigration, interfaith relations, and holidays of various cultures.