A climate choice we can make

Construction on the Line 3 pipeline.,.

I am 73 years old, and I’ve been focusing on the climate crisis for the past 16 years, first as a journalist when I went to New Orleans post-Katrina, now as an activist. I’ve said many times that as bad as things are, I can’t imagine how many of the young people feel whom I work with –- high school and college students –-knowing their future is at such risk. I’ve always said, “I’ll be gone before it gets too bad.” 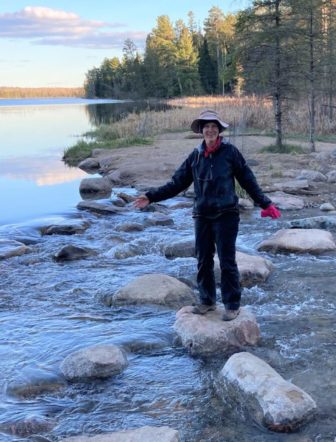 The author at the headwaters of the Mississippi River.

Now I must revise my statement, and my emotions. While the climate-related disasters have been piling up for a long time, this year has been, as they say, off the charts.

To have temperatures 30 degrees above normal in the Pacific Northwest -– resulting in hundreds of deaths of humans and billions of deaths of non-humans, mostly sea creatures – is off the charts.

To have the second-biggest wildfire in California history – and only 30 percent contained as I write, heading for the record books – is off the charts.

To have deadly flooding on several continents, some in places for the first time – is off the charts.

Now comes the sixth report of the Intergovernmental Panel on Climate Change (the IPCC) to tell us in scientific terms what we see all around us, and to present four scenarios that are increasingly terrifying – the worst of which will come to pass if we don’t act boldly, immediately.

It garnered fewer headlines, but another important document was just released: the annual report tallying up the 60 largest global banks’ investment in the fossil fuel industry. Last year’s was called “Banking on Climate Change.” This year’s is called “Banking on Climate Chaos.” Even while starting to invest more in renewable energy, many of the banks have also invested more in coal, oil and gas in all their forms than the year before, and JP Morgan Chase is leading the pack, as it has for the past four years.

Chase invested $317 billion between 2016 and 2020, 35 percent more than its closest competitor, Citi Bank. (Last year, Wells Fargo was second.) Chase and the other big banks invest a lot in Enbridge, the biggest pipeline company in the world. Enbridge, a Canadian company, is building Line 3, an oil pipeline originating in the tar sands of Alberta, across northern Minnesota, despite passionate opposition from the indigenous communities whose land and water – and sacred wild rice – it’s crossing. That includes two crossings near the headwaters of the Mississippi River. There have already been spills of drilling mud into water bodies, and other Enbridge pipeline spills, such as in the Kalamazoo River, have caused tremendous long-term damage.

In the spring a consortium of banks gave Enbridge a ludicrously named $800 million “sustainability loan” to enable it to keep building the pipeline. That’s to reward the company for being “green,” e.g., powering some of their equipment with renewable energy. Yet the end result would be sending 760,000 barrels per day of the dirtiest energy on the planet through the pipeline – the equivalent of building and operating 50 coal-fired power plants. Opponents liken it to giving a health award to tobacco companies.

I was arrested in May with a group of elders and young people protesting Line 3. I met and took leadership from the tough, smart, passionate indigenous women leaders there, who are suffering ever more brutal treatment as the company is annoyed that it can’t finish its project undisturbed. I visited the headwaters of the Mississippi as it flows out of Lake Itaska – a site that is normally full of tourists, but was only us when we visited at sunset. I felt the power in the place.

So, yes, I have shifted my perspective to see that so much of what I love about this Earth has already been lost, and I stand to lose much more in what’s left of my life. The IPCC report says climate change is escalating. The future looks bleak.

One response is to “eat, drink and be merry, for tomorrow we die.” Another response is to band together with others and continue fighting to make it “less worse.” There is a lot of joy down that road.