A cruel irony: Connecticut is wealthier, yet no better off

A cruel irony lies at the core of our current economic conditions. We have never been wealthier, more productive, or more efficient, yet, for many, the odds of obtaining meaningful employment, economic security, quality education, and adequate healthcare grow ever longer.

A few weeks ago, many heralded the newly-released 2015 U.S. census income data that showed the largest increase in the median income in two decades. While the change was welcome, it does not even begin to reverse the trends of the last four decades.

In Connecticut, the problem of income inequality is especially acute.  In 1970, Connecticut was the 36th most unequal state, today it is second.

The Gini coefficient is the most commonly used measure of income inequality.  It ranges from 0, a condition of perfect equality where all members of a population receive identical amounts, to 1, a condition of perfect inequality, where one member of a population receives everything.  Between 1970 and 2015, the Gini coefficient for Connecticut increased from .337 to .492.  Income inequality increased in every state over this time, but Connecticut, by far, had the largest increase.  The increase was more than 50 percent greater than the average for the other states.

One way to visualize this change is to consider alternative distributions of household income. 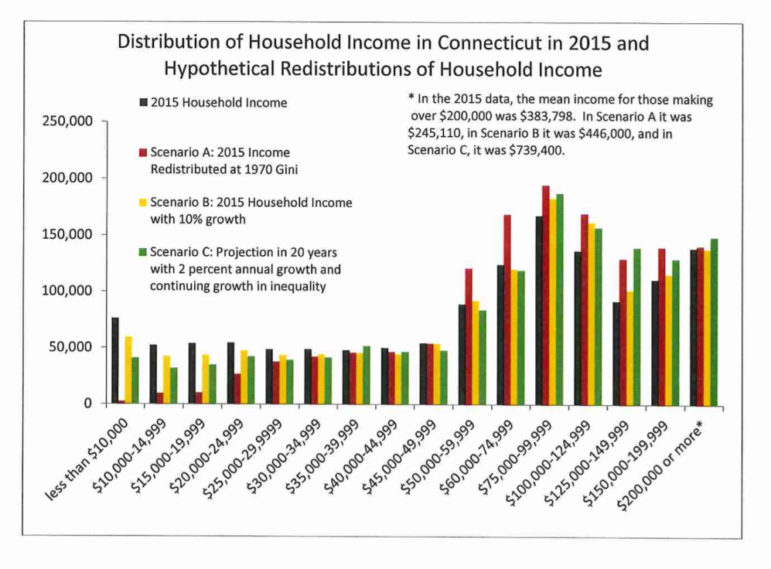 In the chart, the black bars depict the distribution of household income for Connecticut’s 1.34 million households based on the 2015 census data.

Scenario A depicts a Connecticut in which the same income pool results in economic security for hundreds of thousands more households.  These improvements are hypothetically “purchased” by lowering the mean value of those making over $200,000 from $383,798 to $245,110.  Although there is not a single unique solution to this statistical “thought experiment,” it is not possible to keep the household mean income the same and reduce the Gini to .337 without significantly reducing levels of poverty and lowering the average income of the top earners.

Scenario B (the yellow bars) reverses the assumptions and maintains the 2015 Gini coefficient, but imagines a real (i.e. not inflationary) 10 percent increase in the overall size of the income pool.  Under current conditions, roughly half of the new income would be accumulated by the top 10 percent, so that when the remaining half is dispersed across the population, only small reductions in poverty are achieved.

Scenario C (the green bars) presumes an annual two percent real growth in income over 20 years and that the current direction of change continues by raising the Gini coefficient to .559 in 2036.  Although this scenario increases the total pool of income by 50 percent, only modest reductions in rates of poverty because most of the new income is captured by those at the top.

The table summarizes the results depicted in the bar graphs.

In Connecticut today, where half of any gross increase in real income would be amassed by 10 percent of the population, it is difficult to conceive how economic growth could address the cruel irony that plagues many parts of this rich and prosperous state.

By contrast, in a society where tens of thousands of households are no longer mired in cycles of debt and the daily grind of struggling just to get by, it is easy to imagine that many small businesses – restaurants, dry cleaners, auto dealers, masons, and the like – would find new entrepreneurial opportunities and new markets to create businesses and to grow.   Scenario A is hardly a model of equality or some socialist ideal, it simply reimagines our current condition based on our past.