A healthcare system too broken to fix

On March 25, the White house announced that it was going to invest over $6 billion in health centers that are funded through the Resources and Services Administration (HRSA) in order to expand COVID-19 vaccinations and other health services provided to vulnerable populations.

As a chief medical officer for a health center that is strained to reach some of the most disenfranchised patient population in Hartford, this was great news. Yet there was a part of me that took the news with a deep concern. Why you might ask?

Here are the main reasons:

1. We medicalize social problems: the issue of health disparities among the vulnerable did not magically manifest with the COVID-19 pandemic. We have always known that vulnerable populations including minorities and people of color have poorer health outcomes including shorter life expectancies and increased risks for multiple chronic illnesses. We know from much research that about 75% of health is determined by what are called the Social Determinants of Health (SDoH) which are the economic and social conditions of people including where they live, play, work and get their healthcare. The SDoH are also the cause of health disparities.

Yet, instead of solving the root causes of the problem, our response thus far has been to pour more money into the curative arm of healthcare. The point that is important to underscore here is that minority communities are hardest hit by the SARS-CoV-2 virus not because the virus has a stronger affinity to them as a group but it is because their social conditions make them more vulnerable to be infected by the virus and have higher morbidity and mortality from it.

2. The healthcare enterprise has not been a good steward of healthcare dollars: Take a look at the graph below from the Peterson Foundation, a non-partisan foundation whose mission is to increase public awareness on America’s fiscal conditions. The United States spends 17% of its GDP on healthcare, which is double the average 8.6% for other OECD members. If you are like me you would like to know what those extra few billion dollars per year we spend on healthcare gets us compared to say what they get in the United Kingdom, Canada or Germany. The answer is nothing. In fact, the United States performs lower than many industrialized countries on many health metrics including having lower life expectancy, higher child mortality, higher maternal mortality, higher disease burden (a metric that includes both premature death and years lived with disability), lower health service quality and this one really hurts-the US ranks absolutely the last on healthcare access. In 2019 there were an estimated 30 million uninsured Americans. 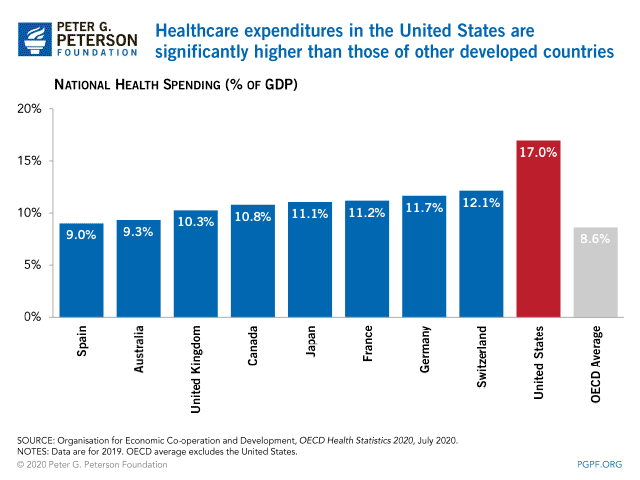 Your next question is probably going to be where does all the money go then, if it is not buying us better health?

According to the Peterson Foundation (See its healthcare tracker here.) and Kaiser Family Foundation1 about 50% of the total healthcare expenditure is swallowed by hospitals, clinics and physicians including the complex operational processes and services that are used to run the system like the well-oiled machine that it is (not).

The second runner up where a lot of our healthcare dollars disappear is within the bowels of pharmaceuticals. Of note, Americans are the most medicated people in the world, albeit poorly treated. My point here is we are not getting the best bang for our healthcare dollars, not by a far cry. Healthcare as an industry has not been able to change course to be more efficient and effective with the exuberant amount of money with which it has been entrusted.

3. No time to plan: most of the funding from the government is here without giving centers time to think on how they may best make use of it. Some centers may not have the right personnel to help with planning. A lot of others are short staffed and are busy with the daily grind to form collaborative partnerships and put out thoughtful proposals with a clear strategy to effectively utilize such a large sum of money.

4. Too broken to fix: yes, health centers need more money to expand services to patients but we have serious health service delivery challenges in our country that money alone can’t fix. Let us take just one example. Our medical education system produces healthcare workers who are overeducated but poorly prepared to solve complex population health issues. Then when they start practicing, we expect them to produce an assembly line type of work output-the same level of quality of care in a 20-minute visit, no matter who the patient may be. The reality is, when you are sitting in front of a patient with poor health literacy or language barrier, polypharmacy, poorly controlled chronic illnesses etc that 20 minute just gets you started. The current primary care delivery model plays a role in health disparity and it is too broken to fix- it needs a complete do-over starting from the way we train healthcare workers.

The government’s additional resources will be a much-needed boost for health centers to expand services to meet the immediate need of the pandemic, such as outreach and education, vaccine hesitancy mitigation, testing, vaccine delivery as well as to improve operational capacities. However, if the government wants to address more pernicious healthcare related problems that affect vulnerable populations the evidence points to addressing social conditions of this population AND redesigning the health system to fit their needs.

If I were the United States government and was able to give $6 billion to improve the health status of the vulnerable, I would give at least $4.5 billion of it (75% ) to social and community entrepreneurs for direct investment in affected and poorly resourced communities. People are experts in their own lives and communities should lead in identifying how the money that is assigned to them should be invested. Better resourced communities could collaborate with vulnerable communities to improve access to citizen scientists and crowd sourcing. Other key partners could be identified by the vulnerable communities, which may include health systems in order to assure success in this social overhaul for better health.

Direct financial assistance to marginalized communities empowers them to own their lives and to improve their health. Some may write this idea off as being too risky, but social entrepreneurship is in fact not a new idea and has been successfully applied in many conditions. If you have ever heard of ‘microcredits’ and their global success in getting many out of poverty then you may know a famous Bangladeshi social entrepreneur Muhammad Yunus who won the Nobel Peace Prize for this concept in 2006. Even in the United States, the concept of social entrepreneurship is becoming more and more recognized including through Bill Drayton’s work who established Ashoka in 1980, an organization that supports entrepreneurs who utilize social capital for community impact.

The billions of healthcare dollars we have entrusted to our healthcare enterprise has thus far failed to deliver fully, why don’t we bet a modest amount of money on communities to solve their own health problems? Afterall, health is really a social endeavor.