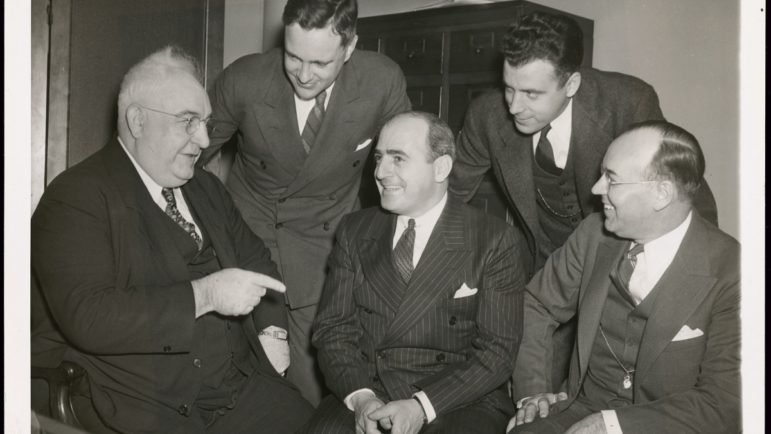 In 1937, a freshman member of Congress who represented my district in eastern Connecticut, Rep. William J. Fitzgerald from Norwich, led the successful effort to pass the National Apprenticeship Act. After being signed into law by President Franklin Roosevelt, the National Apprenticeship Act, which came to be known as the Fitzgerald Act, went on to buoy our nation through wartime, through recessions, and through decades of transformations in America’s economy and workforce by way of its Registered Apprenticeship system.

Fitzgerald was uniquely suited to spearhead this law. He came to Washington, D.C. as a foundry worker with a high school education who had worked his way up from the factory floor to the foreman’s office, to Commissioner of the Connecticut Department of Labor, Mayor of Norwich, and member of Congress. He knew from his own life that getting the right occupational skills can translate into a successful, rewarding career. Over the last 83 years, the Fitzgerald Act apprenticeships are still paving the way to success for millions of Americans.

Apprenticeship “earn as you learn” programs are still popular and highly valuable programs here in eastern Connecticut, where adults of all ages and backgrounds have utilized them to enter our region’s skilled manufacturing sector, which is rapidly becoming younger and more diverse. The Fitzgerald Act is simple — it instructs the U.S. Secretary of Labor to connect employers with workers to develop apprenticeship programs in cooperation with state agencies, organized labor in some cases, and the Secretary of Education, in a system guided by national, high-quality standards to ensure that the programs are providing real employment results.

With that limited framework, the Registered Apprenticeship program has expanded to promote jobs in 1,200 recognized occupations, with hundreds of thousands of new apprentices starting each year. Upon completion of a Registered Apprenticeship, an apprentice can expect to earn an average wage of $70,000 per year. With hundreds of thousands of Americans facing increasing financial pressure amid COVID-19, all members of Congress should feel the increased urgency to expand Fitzgerald Act apprenticeship programs, giving more Americans a shot at these high-paying careers.

Incredibly, the Fitzgerald Act’s success in providing high-skill, high-pay jobs was achieved despite anemic federal investment in its programs. Former Rep. Fitzgerald spearheaded the effort to establish the framework, but for 83 years Congress has overlooked the opportunity to invest further in its success, or has simply failed to take advantage. Last week, the U.S. House took a step toward changing that when my colleagues and I on the House Education and Labor Committee passed out of committee H.R. 8294, the National Apprenticeship Act of 2020 —the first ever reauthorization of the Fitzgerald Act.

H.R. 8294 will finally provide serious investments in the proven, successful model laid out by Congressman Fitzgerald from Norwich over 80 years ago. Not only is it the first bill that would provide a dedicated, reliable source of funding to our State Apprenticeship Offices — where the work of connecting employers to trainees gets done— but it would also create a grant program so that we can keep expanding these opportunities to different sectors like health care, technology and even finance, to recruit new and nontraditional apprentices, and to support small employers who need skilled talent.

We’ve seen how successful the Registered Apprenticeship program can be here in eastern Connecticut, but the lack of federal investment has tightened the window of opportunity for many would-be participants. There are far too few businesses who know about these federal apprenticeship opportunities, and even fewer who are able to access the limited funding that’s currently available for them.

One employer in my district, Chris Jewell, who is co-owner of Collins and Jewell, a steel fabrication company in Bozrah, attested that the Fitzgerald Act apprenticeship program allowed his firm to take a chance on an employee they felt was ready for the next step in their career. Contrary to the claims by critics of Registered Apprenticeships, Chris said the record keeping was no problem.

I’ve met some of the workers at Chris’s shop who today are thriving in jobs with good-paying benefits. Make no mistake: the federal Fitzgerald Act apprenticeship programs make big differences for small businesses and in the lives of real people right here in our communities.

The success that we’ve enjoyed so far through Fitzgerald Act apprenticeship programs is thanks in-part to our former Congressman, and to all the hardworking people and employers here in our region who do the work and make it happen. With the National Apprenticeship Act, we can replicate that success at countless small businesses—from health care, to manufacturing, to technology and beyond.