A. Phillip Randolph — the link between transportation and civil rights 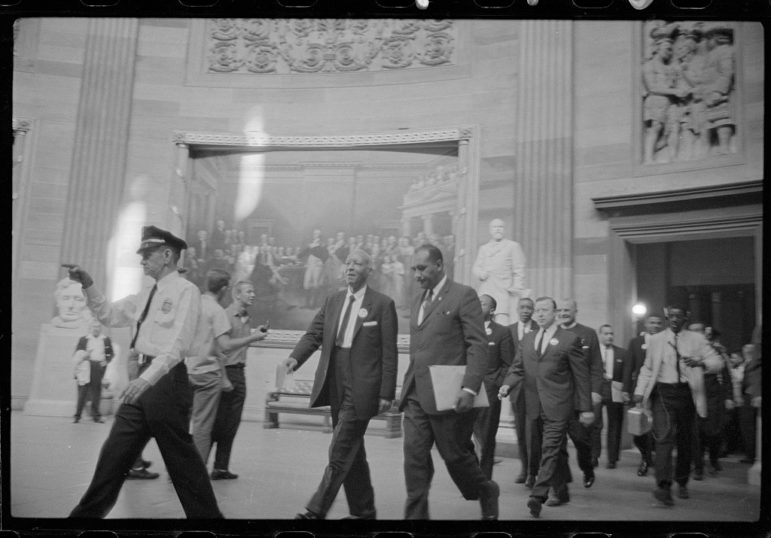 In the history of American transportation, there is one crucial intersection between railroads and civil rights:  the formation in 1925 of the Brotherhood of Sleeping Car porters by A. Phillip Randolph.  This was the first predominantly African-American labor union in the U.S.

It was in 1859 that George Pullman launched the first deluxe railroad sleeping cars bearing his name.  They were an instant hit, offering middle and upper-class passengers the comforts of home.

All of the Pullman Car conductors were white, but the porters who tended to the passengers were Black.  Many of them were former slaves as Pullman theorized they would be used to the subservient roles of lugging baggage, making up the sleeping berths and serving the white passengers’ every whim.

After they retired for the night, passengers would place their shoes in a small compartment accessible from the corridor where the porters would retrieve and shine them.

Pullman’s porters had to be on call 20 hours a day, serving passengers and tending to boardings at intermediate stations.

Porters worked 400 hours per month with their time off being uncompensated.  They had to pay for their own uniforms, meals and shoe shine kits.  Between runs, even away from home, they paid for their own lodging. The hours they spent before and after each trip preparing and cleaning the car were also unpaid.

In 1926 the average porter earned $72 a month in wages and averaged $58 a month in tips.  In contrast, Pullman’s white conductors (who had a union) earned $150 for a 240 hour month, plus benefits and a pension.

Still, Pullman’s Black porters made a good income compared to others, allowing many to enter the middle class in railroad hub cities like Chicago and St Louis.

As one historian put it, a Pullman porter had the best job in his community and the worst job on the train.  There was no room for promotion.

Passengers often referred to Pullman porters by demeaning names like “boy,”, or “George,” applying the first name of the cars’ owner.

In 1925 A. Phillip Randolph started organizing The Brotherhood of Sleeping Car Porters under the rallying cry “Fight or be slaves.”  It took a decade of court battles and the threat of a national strike before the union was recognized in 1937, giving porters a big wage hike and a 240-hour per month work schedule.

Randolph and others in the Brotherhood went on to become leaders of the civil rights movement.  One porter, Edgar D. Nixon, helped organize the Montgomery Alabama bus boycott after Rosa Parks’ arrest in 1955.  While Nixon was working the rails he had a young minister assist in that battle… The Rev. Martin Luther King Jr.

By the 1950’s train service was in decline and in 1959 Pullman closed up its sleeping car business.  Some porters went on to work with the legacy railroads and a few were still around when Amtrak took over.

In 1995 a museum dedicated to Randolph and his work for the Pullman porters was opened in Chicago in one of the original row houses George Pullman constructed as worker housing at his plant.  The museum is now collecting the names and histories of past porters and their descendants to celebrate Randolph’s contribution to Black history