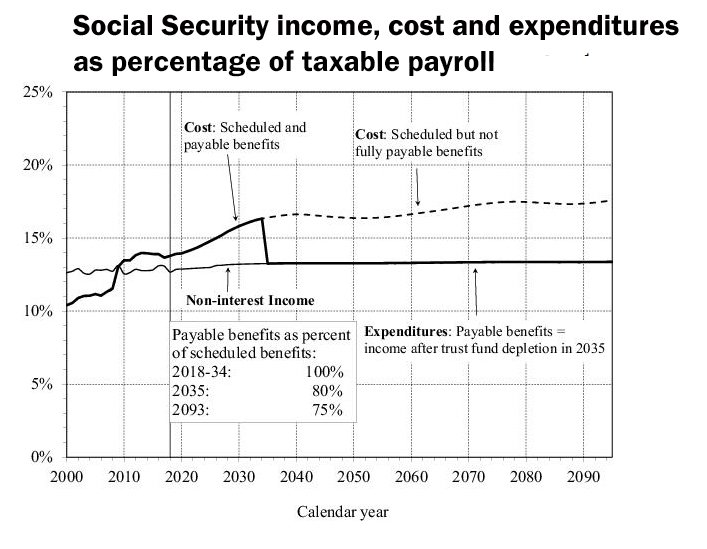 Beginning in 2020, cost is projected to exceed total income, and combined Trust Fund reserves diminish until they become depleted in 2035. After trust fund reserve depletion, continuing income is sufficient to support expenditures at a level of 80 percent of program cost for the rest of 2035, declining to 75 percent for 2093. (Source: Office of the Chief Actuary, Social Security Administration.)

Let’s be real. Social Security benefits will be cut by 20 percent in 2035 unless Congress acts, according to Social Security Chief Actuary Steve Goss. The Social Security 2100 Act, co-sponsored by 210 Members of the House of Representatives, not only prevents those devastating cuts but also expands benefits across the board, improves the cost-of-living adjustment (COLA) and cuts taxes for millions of workers.

Last month, House Ways and Means Committee ranking members Kevin Brady (R-Texas) and Tom Reed (R-N.Y.) criticized the Social Security 2100 Act, claiming it is too expensive. They also declared that they would like to work with Democrats on a long-term solution to Social Security. However, for the eight years the Republicans controlled both chambers of Congress, they did nothing to address the looming 20 percent across-the-board benefits cut in 2035. For those eight years, not only did they never work with us, but they would not even hold a hearing on legislative proposals to improve Social Security’s solvency.

The hard truth of the matter is that Republicans want to cut Social Security, and doing nothing achieves their goal.

With 10,000 baby boomers becoming eligible for Social Security every day, we must act now. Rep. Tom Suozzi (D-N.Y.) laid it out very well during last week’s Ways and Means Committee hearing: To make Social Security sustainably solvent, we can either raise revenue (as the Social Security 2100 Act does gradually over time in a commonsense way) or cut benefits.

Poll after poll shows that Americans are willing to pay a little bit more for proposals such as the Social Security 2100 Act in order to strengthen Social Security. This has BIPARTISAN support among Americans. The problem is Republicans in Congress are ideologically opposed and have taken a pledge not to raise revenue. This is not where the American people are!

The Social Security 2100 Act provides a solution to strengthen and protect Social Security moving forward into the next century. The Act enhances benefits, adjusts the COLA to reflect seniors’ needs, cuts taxes for almost 12 million seniors and ensures no one who has worked their whole life will retire into poverty.

Further, it’s paid for in a commonsense way that strengthens Social Security, making it solvent beyond 75 years. This is the solution working people need because doing nothing is not an option. It’s a de facto plan for automatic cuts!

Consider that on average 90 percent of all working Americans haven’t recovered the wealth and assets they’ve lost since the Great Recession of 2008. How ironic that Republicans want to cut Social Security to pay for their $2 trillion tax cut they’ve saddled working people with, while 83 percent of the break went to the wealthiest 1 percent. Strengthening Social Security so it’s there for today’s seniors and future generations gives working people the certainty that even while their 401(k)s were losing money in 2008, they were able to depend and count on Social Security, which has never missed a payment.

Even the most casual observers are not fooled and know the Republicans’ plan is to do nothing. The only solvency plan they’ve introduced in recent years would cut benefits by 30 percent. And if they continue down their path of doing nothing, it will result in a 20 percent across-the-board cut to beneficiaries’ checks.

The reality is we can strengthen Social Security without cutting benefits under the Social Security 2100 Act! When average Americans, who are making $50,000 a year, sit down at their kitchen table, worried about securing their retirement, they’ll notice an extra 50 cents a week each year going toward their retirement, disability insurance and survivor’s benefits, which is secured by the full faith and credit of the USA. Where in the private sector can you buy this package of benefits that is there for all Americans? You can’t! It doesn’t exist.

Nobody’s getting rich off Social Security — people are spending that money on food, housing, medical care and essential needs.

Millennials will also need this security more than their parents do. They are burdened by overwhelming student debt and higher housing costs and are earning less. They aren’t prepared for a life emergency, a spouse’s death or a disability, let alone their retirement.

Shaun Castle, deputy executive director of the Paralyzed Veterans of America, testified at a recent hearing. He’s a millennial and a disabled veteran.

He said, “My own story begins in November 2003 when I was 22. Like many 22-year-olds, I had my life’s direction set. I was going to make military service my career, with a specialty in law enforcement, but an Army training accident damaged my spine. … When I was determined to be eligible for SSDI, I was on the verge of being homeless, running out of food. … Had I not received SSDI when I did, I do not honestly know what I would have done and how that would have impacted where I am today.” One out of 4 millennials will experience a disability of some kind.

Based on what we’ve seen, the Republicans have a plan: It’s to run out the clock, profess concern but offer nothing.

It worked when they were in the majority. But a sweeping bipartisan movement is demanding a vote, calling for a rendezvous with reality declaring how important, impactful and essential Social Security is. If Republicans have a better plan, they should put it forward. The Social Security 2100 Act was first introduced in 2014 and in every subsequent Congress since. The time to act is now. The American people deserve solutions and results, and they fully understand doing nothing, not voting, means cutting the benefits for which they’ve paid with each paycheck and worked a lifetime to earn.