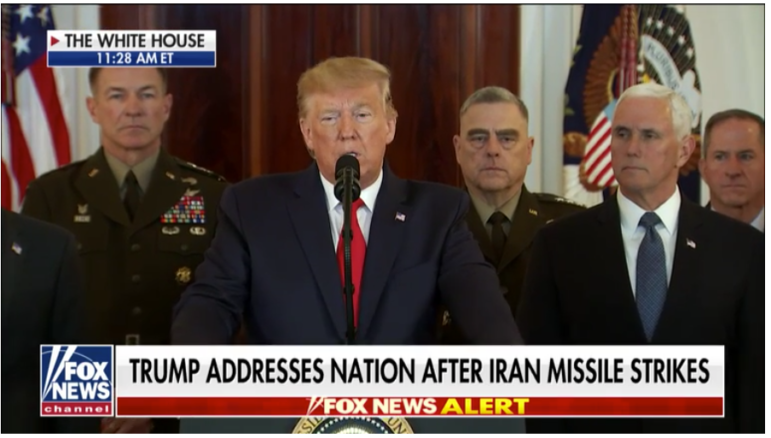 Donald Trump has been excoriated by critics for ordering the killing of the number one terrorist in the world, Qassem Soleimani. If he wasn’t number one, who was?

If Iran isn’t the very definition of an enemy and a threat to world peace, what nation is? Iran is a nation whose national slogan is “Death to America” and whose greatest aspiration is to wipe another nation off the map.

The president’s critics engage in some truly tortuous mental gymnastics to level their charges.

Take U.S. Senator Chris Murphy, Democrat from Connecticut. On New Year’s Eve, as Soleimani’s henchmen were ransacking parts of the U.S. embassy compound in Baghdad, he tweeted: “Trump has rendered America impotent in the Middle East.”

Simultaneously, Iran’s Supreme Leader – and Top Tweeter, Ayatollah Khamenei challenged the president with a taunting tweet: “You can’t do anything.”

Both Murphy and the Ayatollah responded, the former challenging the president’s authority to kill “the second most powerful person in Iran,” and Khameni with an ineffectual rocket attack.

Execution: If ever there were a surgical strike, this was it. Perfect execution. Two bad guys and their aides were eliminated without any collateral damage.

Authorization / Consultation:  Despite delegitimizing semantics terming the killing an “assassination” and repositioning Soleimani as an anodyne national leader or military commander, he was the leader of the Quds Force, which was designated a terrorist organization by the U.S. State Dept long ago in 2007.

Critics want proof that Soleimani was planning an imminent attack, as if the Quds Force leader wasn’t planning attacks every single day of his life.

Windows of opportunity for surgical strikes open rarely and close quickly. Delay for significant congressional involvement might have jeopardized the opportunity. Moreover, POTUS operates in a White House that leaks like a sieve. Anonymous op-ed writers rove the hallways alongside whistleblowers, who communicate constantly and coordinate closely with anti-Trump Democrats and media reporters, who lionize these moles.

Justification:  If Soleimani’s decades of mischief and his terrorist designation weren’t enough, Soleimani had just orchestrated an attack on an American embassy, sovereign territory under international law.

Tactical rationale: The U.S. took the initiative, leaving Iran three limited options. One, no retaliation would have made Iran look weak. Two, retaliation with its own forces would risk counterattack on its own soil. Yet, three, acting through proxies would involve the same risk, but of greater magnitude: (a.) if Iran revealed its behind-the-scenes role, it would show itself dramatically as the regional meddler that it is and risk U.S. counterattacks on both the proxy and itself; (b) if it remained hidden, it would get no credit for retaliation – and look weak. U.S. strategy (yes, we had one) put Iran in a box.

Predictably, Iran chose option two, but its missile attack was ineffectual with no casualties and “minimal” damage, so the president opted for the same restraint that he exercised in response to Iran’s downing of the U.S. drone over the Strait of Hormuz (for which the likes of  Murphy called him a chicken hawk).

Preparation/vulnerability:  Contrary to many critics, the president considered and prepared for the consequences. He began dispatching the 82nd Airborne before the killing and had dispatched other troops to Kuwait well beforehand – and had sent anti-missile Patriot missile batteries to Saudi Arabia months ago.

Did the president stir up a hornets’ nest? Well, the hornets’ nest pre-existed and persists, except that the queen bee (hornet) is now dead and Iran has been taught a lesson. Could we be drawn into a regional war? Yes, Iran has been trying to provoke us for months. The only way to avoid any risk would be complete withdrawal from the region, for which Murphy and crew would charge the president with isolationism, right?

The strategic rationale on the ground:  Critics have alleged that the president has no strategy. Wrong, he’s said that the Mid-East is no longer of strategic importance to the U.S. We are energy self-sufficient. The president has made clear that his foreign policy is guided by pragmatism, realism and national interest.

Will Iraq ask the U.S. to leave? Maybe. But both Iraqis and Iranians have been protesting in the streets against Iran, with Iraqis angered by Iran’s treatment of Iraq as a vassal, and Iranians by the Ayatollah’s widespread foreign meddling while ignoring the needs of his own people.

Trump has not withdrawn. Were Iran to totally control Iraq, including its oil resources, that would undermine Trumps’ sanctions strategy, and he’s protecting our allies who need Mid-East oil, by keeping open the Strait of Hormuz.

The global strategic rationale:  The sanctions regime is working, especially because the Ayatollah has spent all the cash Obama sent Tehran – on foreign adventures. Trump’s real attack on Iran is economic, not military. Khameni has been complaining for months that the U.S. has been conducting “economic warfare.”

Khameni has sought to lure the U.S. into a military confrontation, somehow hoping to change the calculus and escape the sanctions. Trump hasn’t taken Khameni’s bait, but he cannot ignore the military dimension entirely. The killing of Soleimani is a worthy exception to the president’s non-military approach.

The sanctions may force Khameni to look at North Korea and see the true cost of nuclear “success,” namely international pariah status and appalling domestic poverty.

True, a nation without nuclear weapons is relatively defenseless against a superpower. But if we accept, as a justification for pursuit of nuclear arms, the idea that all nations have a right to unimpregnable defenses, then, the world should give up completely on non-proliferation.

Actually, there should be a universal rule prohibiting nuclear arms to any nation not already possessing the bomb. That prohibition should be absolute and permanent. Obama’s 2015 deal was only a pause and just kicked the can down the road to a place now only five years away.

This civilian’s after-action report awards the president an A+. The U.S. and the president are winners in this battle, which certainly doesn’t guarantee victory in the long war, but it improves our chances, despite the hollow protestations of the likes of Chris Murphy.

Red Jahncke is the President of The Townsend Group Intl, LLC, in Greenwich.