At Bastogne, his reflections on courage and world peace 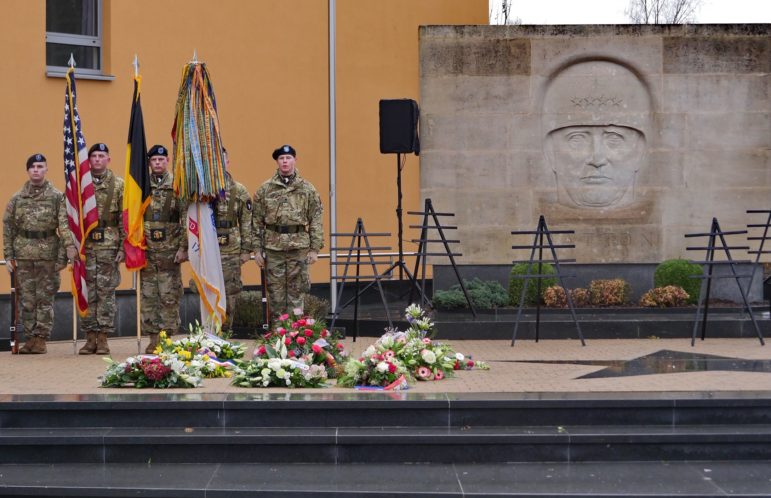 On December 16, I had the honor to be in the small Belgian town of Bastogne to attend a ceremony that, for all Americans, was a welcome reminder of the persistent high regard that the civilized world still holds for our nation. The ceremony honored a few dozen surviving U.S. veterans who fought in the epic Battle of the Bulge, which occurred 75 years ago.

On December 16, 1944, Hitler’s Panzer Armies crashed through the Ardennes Forest in a desperate, vicious surprise attack that threatened an Allied victory over the hateful ideology of the Nazi regime. The relatively small contingent of U.S. forces in that sector were literally the only line of defense over the best mechanized force left in Germany’s war machine. As Winston Churchill wrote of that battle, “This is undoubtedly the greatest American battle of the war and will, I believe, be regarded as an ever-famous American victory.”

This year, as the world commemorated the 75th year since that costly and consequential American victory, a bipartisan, bicameral delegation of members of Congress led by House Speaker Nancy Pelosi and by Sen. John Barrasso (R-WY) participated in parades and ceremonies at the Mardasson Memorial in the village of Bastogne, and in Luxembourg City to thank the inspiring, down-to-earth veterans who fought in the six-weeks-long Battle of the Bulge.

Over three days, these heroes were cheered and feted by everyone from the Royal families of Belgium and Luxembourg, to the huge crowds of American flag-waving Belgian citizens, all of whom deeply appreciated the courage and sacrifice that the predominantly U.S. forces put forth in that freezing, violent struggle. 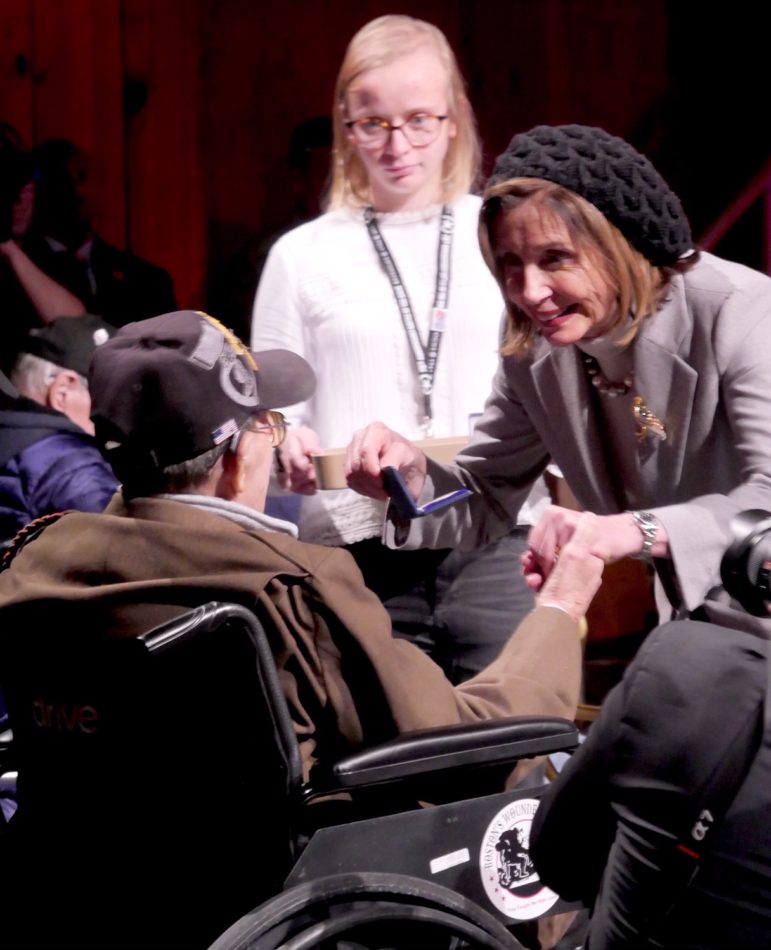 House Speaker Nancy Pelosi speaks to a veteran at the ceremony,.

In Bastogne, a night time “foxhole ceremony” conducted by current members of the American 101st Airborne Division was held in the cold December woods. The wooded area was packed, and the audience was brought to tears as the service members of today’s 101st read letters to home, poems, and diaries written by their predecessors 75 years ago as they were dug into shallow, root-filled foxholes in the frozen and unforgiving soil of the Ardennes Forest.

In Luxembourg, the American cemetery was the site of another powerful remembrance of the cost of that hard-fought victory in Bastogne – 5,076 U.S. soldiers are buried there along with their leader, General George S. Patton. Altogether, 81,000 U.S. soldiers who would later be declared wounded, captured, missing, or dead threw themselves at the German counterattack in the freezing, tangled woods of the Ardennes – a part of the world many of their loved ones back home had never heard of.

One of those GIs who arrived there in the final weeks of the counterattack was Sergeant Adolph Sutcavage from Vernon – my wife Audrey’s uncle, who walked her down the aisle of St. Joseph’s Church in Rockville 30 years ago at our wedding. Sgt. Sutcavage of the 82nd Airborne Division was the quintessential solder – 20 years of service, highly decorated, and extremely modest.

The events our delegation participated in were far more than walks down memory lane. The speeches by Alabama veteran Malcolm “Buck” Marsh Sr., King Philippe of Belgium, Grande Duke Henri of Luxembourg, President Frank-Walter Steinmeier of Germany, and Secretary Mark Esper of the U.S. Department of Defense were not focused solely on the astounding military feat which occurred there – the speakers also took the opportunity to reflect on the cause that people like Buck Marsh were fighting for, and the need to remain vigilant in the support of that cause.

As Belgian King Phillipe powerfully stated, “The America of 1944 defended freedom and democracy with all its strength […] Since then, we have gradually built a new Europe based on reconciliation and a firm desire to put age-old rivalries to rest. Throughout the years, the United States has been like ‘a shining city upon the hills,’ standing shoulder to shoulder with Europe, ready to support and lead other countries who shared the same values. The fight for freedom continues in the form of constant vigilance for the appropriate use of freedom. It condemns calumny, polarization, and exclusion, aiming instead to bring together and reconcile.”

Buck Marsh expressed the same sentiment more succinctly. After describing his gratitude for a Belgian woman who gave him potato soup while he was standing watch 75 years ago in blizzard snow conditions – a meal that he said might have been the best in his life – he ended his remarks by saying, “Let us pray for world peace.”

The examples of veterans like Buck Marsh, Adolph Sutcavage, and their brave companions are powerful, and should compel us to ensure that “age old rivalries” are indeed put to rest – from rivalries between nations, down to irrational mistrust that can arise between races and religion. The racial hatred that fueled the Nazi tanks ripping through the trees and snow of the Bastogne region can never be allowed to reappear.

As our friends in Europe reminded us this holiday season, the United States is still “The Shining City on the Hills” that the world looks toward to lead the way into an inclusive peace that is founded on freedom, and democracy.

U.S. Rep. Joseph Courtney at the ceremonies in Bastogne.