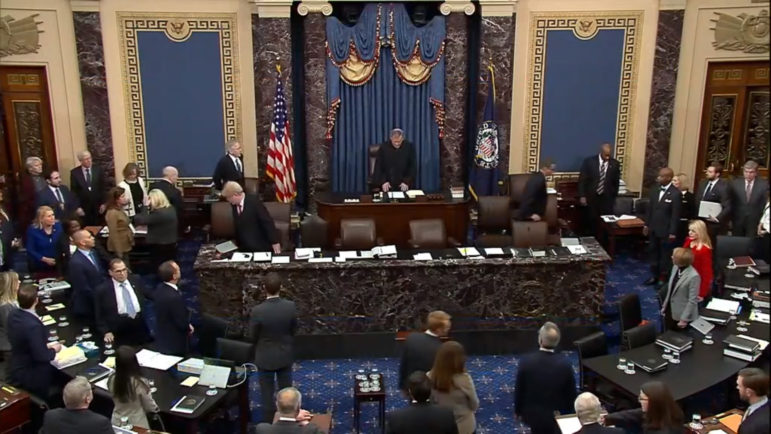 “A judge shall act at all times in a manner that promotes public confidence in the independence, integrity, and impartiality of the judiciary, and shall avoid impropriety and the appearance of impropriety,” reads the American Bar Association’s Model Code of Conduct. It is clear on its face that 53 of the judges now sitting in the impeachment trial of President Trump are in gross violation of this code.

Something needs to be done. The Bar Association needs to hold these judges to account. Its more than 350,000 members need to speak out to uphold its mission to “defend liberty and deliver justice.” Likewise, our hundreds of federal judges, bound by a similar code of conduct, should use their authority to impress on the 53 judges the importance of upholding an “honorable judiciary [that] is indispensable to justice in our society.”

Explains the conservative Heritage Foundation, “the requirement that Senators be on Oath or Affirmation in impeachment trials was plainly designed to impress upon them the extreme seriousness of the occasion.” Yet judge Lindsey Graham (R-SC), chair of the Senate Judiciary Committee, intended to violate his oath from the outset, telling reporters in December that he’s “not trying to pretend to be a fair juror.”

Judge Mitch McConnell (R-KY) audaciously announced that he would defer to the White House on matters concerning the conduct of the Senate impeachment trial. He told Fox News, “I’m going to take my cues from the president’s lawyers.”

It’s fair to say that any federal or state judge who so blatantly conspired with the defense counsel would be impeached and removed from office in short order. The ABA should call on Majority Leader McConnell to recuse himself.

Republican Majority Leader McConnell went further, deciding to speak for the entire jury of 100 Senators before the trial even started. He announced in December, “There’s no chance the president’s going to be removed from office.”

Imagine the public outrage if a federal judge opened a trial announcing the verdict before the trial commenced. Attorneys in the 2,300 prosecutors’ offices around the nation should be raising their voices in opposition to this miscarriage of justice.

No doubt, the public is outraged. According to a recent Reuters/Ipsos poll, large majorities of Americans, including at least 70 percent of Republicans, said senators should “act as impartial jurors” and that they “should allow witnesses with firsthand knowledge of the impeachment charges to testify.” Senator Angus King (I-ME) reported that nearly 100 percent of the calls to his office support calling witnesses.

There are 1.4 million attorneys in the U.S. It’s time for them to uphold the oath to which they swear each time they appear in court, that they “will uphold the Constitution of the United States.” They should heed the words of Rev. Dr. Martin Luther King, Jr. whose birthday was celebrated the day before Donald Trump’s impeachment trial began, “There comes a time when silence is betrayal.”

Jonathan Perloe is on the Steering Committee of Voter Choice CT, the citizen-led movement to bring Ranked Choice Voting to Connecticut.