The League of Women Voters mission is to empower voters and defend democracy.  This means we advocate for voting rights.  Redistricting may not sound like voting rights, but it is—district lines determine who is on your ballot.  Redistricting can even affect voting behavior. If voters don’t feel their vote will count, because all the candidates on their ballot are shoe-ins or because their preferred candidate has little chance of prevailing, they don’t vote.  Voter alienation equals voter suppression.

This year, we are focused on ensuring that the just-released census data is used to draw fair, representative voting districts. How Connecticut draws the districts is defined in our state constitution.  We can’t change the process for this year, but we can expect this year’s process to be transparent, to provide opportunity for public input, and to engage the public in good faith.

What is redistricting?  Our U.S. Congress members, state legislators, and many city council and school board members are elected by people grouped into districts.  Once a decade, after a census, these districts are redrawn using the new population numbers determined by the census.

Why do we do it?  As population shifts between and within states, districts have to be redrawn to ensure that each one has the same number of people. This is called the principle of “Equality of Population” and it is required by the U.S. Constitution.   If district populations are uneven in population, some residents have more access to their representatives while some have less.

What’s the urgency?  The U.S. Census Bureau released the results of the 2020 Census in August—five months later than usual.  This late delivery increases the chances that the process will be rushed and opportunities for public input diminished.  That’s what looks to be happening: the Reapportionment Committee has begun holding public hearings and here is the schedule:

According to the state constitution, the Reapportionment Committee—four Democrats and four Republicans chosen by party leaders in the State Senate and House in February —must submit a plan to the General Assembly and have it approved by a tw-thirds majority in both houses by September 15.

If that deadline passes without an accepted district plan, responsibility is transferred to a Redistricting Commission.  These are the same eight legislators with a ninth member selected by the eight previously selected commissioners. They are charged with preparing a plan that at least five members support, by November 30. If they cannot agree, the state supreme court can compel them to agree to a plan, and if that fails, then the court can draw the boundaries itself. The plan must be done by Feb. 15, 2022.

It’s a complicated process which, according to the National Conference of State Legislatures hasn’t worked well for several cycles: “Since 1981, the legislature has been unable to redistrict by the state’s constitutional deadline…”

How can we make redistricting better?

The League of Women Voters supports establishing independent special redistricting commissions, with membership that reflects the diversity of the unit of government, including citizens at large, representatives of public interest groups, and members of minority groups.

Some states have already done this, replacing their partisan commissions with non-partisan citizen committees more likely to draw maps that prioritize the needs of the community, not the desires of the legislators. 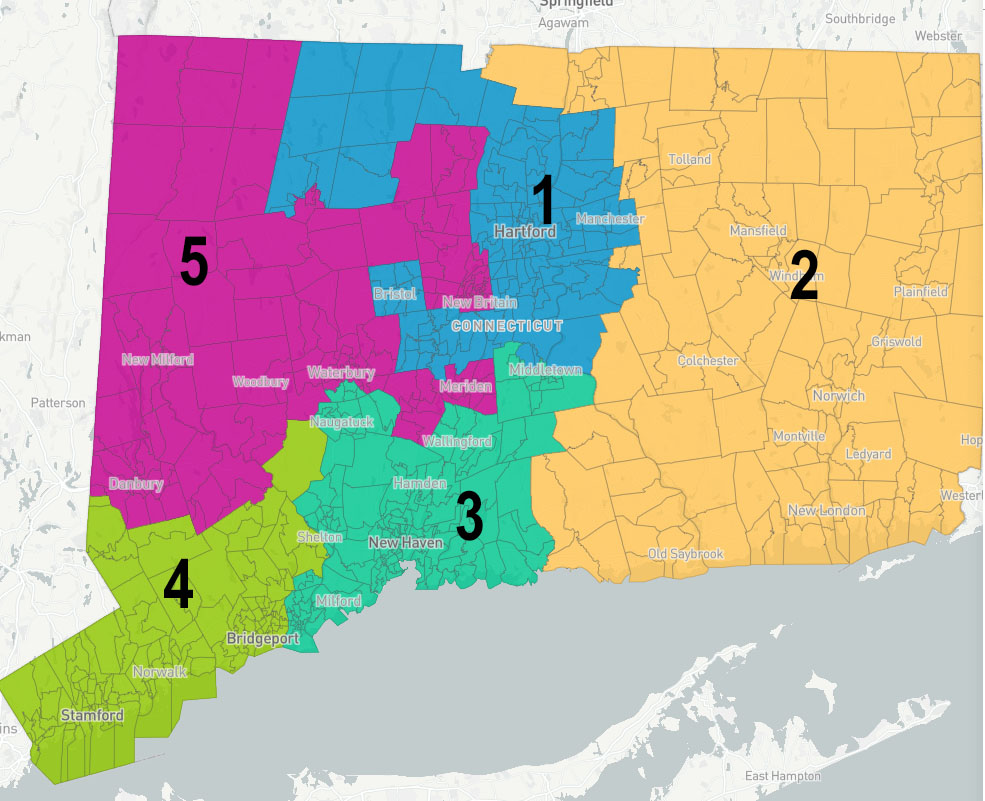 While we can’t change the timeline for 2021-2022, there are a number of ways we can influence the outcome.  We can insist the committee conduct the process in full view by insisting that they:

In other words, we need the Committee to share their thinking with the public, including any conversations they have been having with other legislators.  As it stands now the redistricting process in Connecticut is legislator-centric—we believe that it should be public-centric.

What you can do: We encourage everyone to elevate their voices by attending the public hearings around the map-drawing process listed here. You can also contact  your state Legislators and convey the message that the redistricting process should be open and transparent. Include your own House and Senate representatives in addition to the Reapportionment Committee members.

Want to learn more about redistricting?  Read the five-part LWVCT Summer Redistricting  Series: 1) Redistricting is Here!2) Who Draws the Maps and How; 3) Criteria for Drawing the Lines; 4) Math and Maps; 5) Key Messages and Questions

Fair and equal maps are key to a representative democracy.

Laura Smits is the President of the League of Women Voters of Connecticut.

Connecticut’s R&D credit Is the best in the U.S. — but only if companies can count on it

Stop the steal … of our freedom!