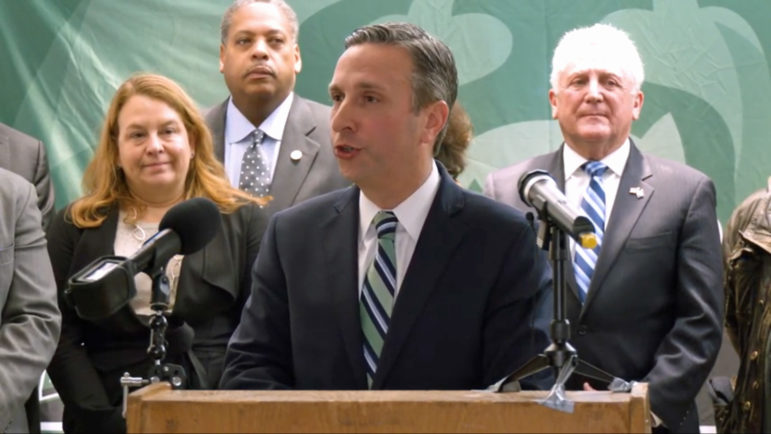 On Dec. 9 of last year, Senate Majority Leader Bob Duff hosted a surprise press conference surrounded by state and local Democrats Lucy Dathan, Chris Perone, Mayor Harry Rilling and others.  Senator Duff stood next to a sign that read: A Brand New Norwalk High School.  According to an article in the Norwalk Hour, Duff and other officials familiar with the project said, “an agreement had been negotiated with the state to provide an 80 percent reimbursement, more than double the roughly 33 percent the state normally offers on school building projects.”

If you care about the truth AND your taxes, know this: right now there is no plan for a brand new Norwalk High School, and there is no plan for 80% reimbursement by the state.  As Konstantine Diamantis of the Office of School Construction Grants recently stated, and as Superintendent Steven Adamowski confirmed, special legislation must be approved before Norwalk can count on any state funding.  There is no guarantee of 80% funding for a regional high school or the more typical 22% for a local one, despite Duff’s promises and Mayor Rilling’s affirmation of that support.  This being an election year for Senator Duff, facts and words matter more than ever.  And Senator Duff was knowingly disingenuous when he implied that this was a done deal.  It is not.

We had several schools on the state’s list prior to Duff’s High School announcement: Columbus Magnet at the old Ely site and a new school on Concord Street (current Columbus).  As of today, Ely, which was essential as swing space to accommodate Columbus students during Concord construction, has dropped off the state’s radar due the open space dilemma.  Effectively, both schools are no longer in the queue.  Remember the BOE Facilities Committee —people we elect to make these decisions– had previously determined that our greatest need was at the elementary level, specifically in South Norwalk.

No one involved in this process has been forthcoming with information, despite a fairly detailed presentation from Duff and preliminary Ed Specs presented to the Board’s Facilities Committee on the Dec. 12.  A Freedom of Information Act request was submitted on December 10 to those individuals most likely to have records related to the development of Duff’s High School plan.  To date, more than five weeks later, that request has been met with no responsive records at all.  At the December 12 Facilities Committee meeting, Dr. Adamowski stated there had been a series of meetings, beginning in May, at which he, Mayor Rilling, Diamantis and Duff were present.  All four have been copied on the FOIA request.  All four have so far failed to produce any responsive records.

To further complicate matters, on Jan. 9, 2020, I received an email from Rosemond White, executive secretary of the Department of Administrative Services, saying the, “State Office of School Construction Grants do not have any record responsive to your request.”

I replied, “Just to clarify, you are saying that there are NO responsive documents related to Senator Duff’s recent announcement regarding a new, state-of-the-art Norwalk High School to be 80% funded by the state….Thank you for clarifying that this project seems to have been conceived without any supporting documentation regarding need and/or feasibility.”  Three hours later I received the following reply from White: “I just received news from Mr. Diamantis that his assistant has records/emails that she is compiling to send to our office.”

Duff has long sought to overthrow the authority of the local Board of Education. First, he demanded that School Governance Council positions remain open to elected officials. His SGC position in fact seems to have led to NHS scheme cooked up with Diamantis in May, under the guise of, “why spend $11 million when we can spend $200 million?” Then Duff wanted municipal leaders to appoint BOE chairs instead of the boards themselves.

Last year he floated a school regionalization plan no one wanted.  Bob Duff’s High School plan is simply another attempt to usurp the authority of this elected body and to foist regionalization on an unwilling electorate.  To repeat, there are no plans today for a brand new Norwalk High School and there is no money.

Our BOE and Common Council will be pressured in the coming months to appropriate funds, as the council did Tuesday when they approved $50,000 for the development of preliminary architectural drawings, diverted from the previously approved NHS capital budget.  We have been given a false “use it or lose it” argument in favor of a new facility that no one asked for and that no one can afford to pay for.  Whether or not Duff, Diamantis, Mayor Rilling and Adamowski eventually disclose what they knew and when they knew it, the lack of responsive documents more than five weeks after Duff’s surprise announcement is telling.