Build on progress by sticking to the ECS formula 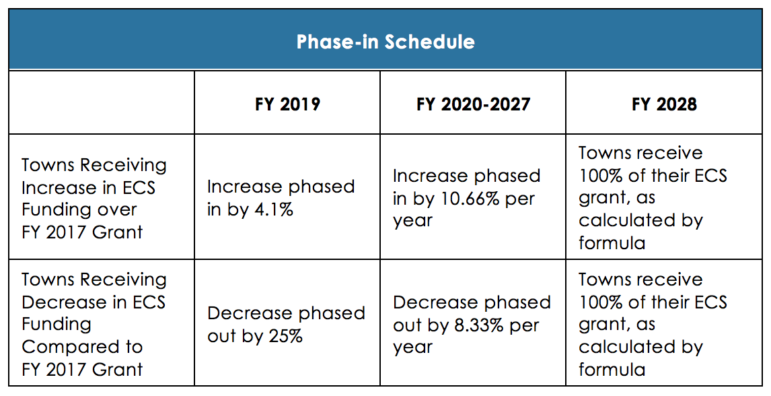 Currently in the second year of a 10-year phase-in schedule, the new ECS formula is increasing education funding equity in Connecticut by providing more resources to students, school districts, and towns with greater needs.

Over the next two fiscal years alone, the ECS formula will drive an additional $84.5 million to Alliance Districts, the state’s 33 lowest-performing school districts, which serve a disproportionate amount of Connecticut’s low-income students and English Learners — student populations that research has shown need more resources to close the achievement gap.

But this progress cannot stop now.

Connecticut must continue the positive work to improve our state’s education finance system by following the ECS formula and funding its phase-in schedule.

I applaud the General Assembly for recognizing this need when it passed the biennial state budget last year, as well as Gov. Ned Lamont for faithfully adhering to the structure of the ECS formula in his proposed budget adjustments for FY 2021 and sticking to a realistic phase-in schedule that reflects Connecticut’s current economic and fiscal needs.

Prior to the General Assembly adopting a new ECS formula in 2017, Connecticut for years was distributing state education dollars through arbitrarily awarded block grants based on political power rather than student needs and town wealth. That process was not fair to Connecticut’s school districts, its towns, and most importantly, its students.

In order for our state to provide all local public school students with the resources they need to succeed in and outside the classroom, Connecticut cannot go back to the way it used to distribute state education funding. Connecticut’s students deserve to be funded through an equitable and transparent formula that is based on their learning needs and the needs of their communities.

This is why I urge the General Assembly to build on the progress it has made over the past few years to improve how our state funds public education, and continue faithfully following the ECS formula.

By continuing to follow the structure of the ECS formula, Connecticut is committing to fairly funding its local public schools, investing in its students, and driving funds to communities and school districts in need of greater financial assistance.

Over the course of its 10-year phase-in, the ECS formula will provide an additional estimated $401.7 million to Alliance Districts. This is a substantial investment in Connecticut public education that will drive greater funding to the communities and school districts in our state with some of the greatest financial needs, and help provide all of Connecticut’s local public school students with opportunities for success.

Although it doesn’t include ALL public school students and maintains Connecticut’s disjointed system of more than 10 different education funding formulas for students who participate in our state’s school choice programs, the ECS formula now in place is still a significant step for improving how our state funds public education and deserves to be continued. By continuing to honestly follow the ECS formula, Connecticut would be continuing a structure that provides greater predictability for school districts, better transparency for taxpayers, and more equitable funding for students.

In the past three years, our state has made significant progress in improving our education finance system and making sure state education dollars are distributed equitably and transparently. While faithfully following the structure of the ECS formula is not the only step the General Assembly should take to build on the progress it has made to Connecticut’s education finance system, it is an essential one and one that should continue to be a priority for legislative leadership and the governor.