Building strength in solidarity — and support for the PRO Act 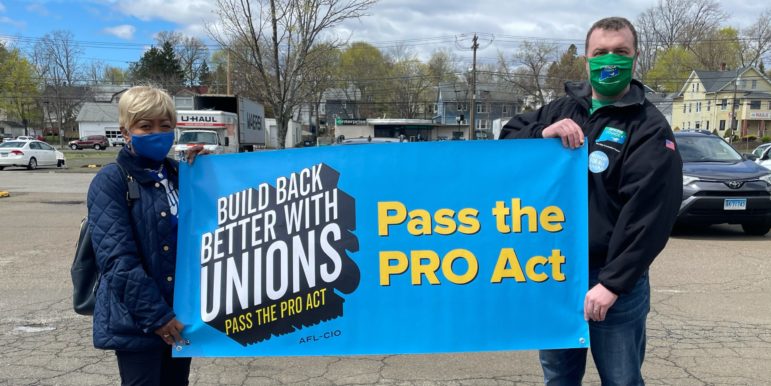 Solidarity is walking a strike line, writing to elected officials, organizing the underpaid and overworked into a union, or actively pushing back against the age-old misconception that unions are the scourge of our economy. In Connecticut and throughout the country, unions have and always will serve as a check on corporate greed. As President Biden said in his recent address, “Trickle-down economics has never worked. It’s time to grow the economy from the bottom up and middle out.” Trickle-down economics only works if rich executives allow the wealth to flow downward.

Corporations tend to hoard the wealth at the top while their product-producing workforce barely take in a livable wage. They use their union-busting tactics to divide workers through fear. Fear of job loss. Fear of the inability to provide for your family. They know that divided we are weak. They know that divided we beg for raises. We, however, know that united we are strong; only when we are united will we win and revive a dying middle class. Only through solidarity do we win these fights.

Solidarity means standing together to fight for legislation that matters for all workers – greater health and safety regulations at the workplace, enforcing laws concerning wage theft, making certain that the heroes who sacrificed their health and safety during the pandemic are treated as such. It ensures that workers looking to unionize are not retaliated against or harassed by management. Solidarity establishes a predictable work schedule, secures access to pensions, and closes the wage gap for women and people of color through collective bargaining.

This is why organized labor continues to work tirelessly in lockstep to pass the PRO Act in Washington. It is not just labor law reform, it is civil rights legislation. It supports freelance workers, it is progress for women, and the LGBTQ+ community. Because ultimately, we fight for equality and fairness for all. We fight for solidarity.

Thus, we are committed to going back to our union roots of community organizing. As Presidents of the AFL-CIO’s Eastern and Western Connecticut Area Labor Federations, we know that our community’s concerns and labor’s concerns are one in the same. A living wage for working families, comprehensive and affordable healthcare, and a school system that is fully funded, are all essential for a better quality of life.

Ed Hawthorne and Shellye Davis are candidates for President and Vice-President of the Connecticut State AFL-CIO, respectively.