Can we make Black lives matter in the Land of Steady Habits? 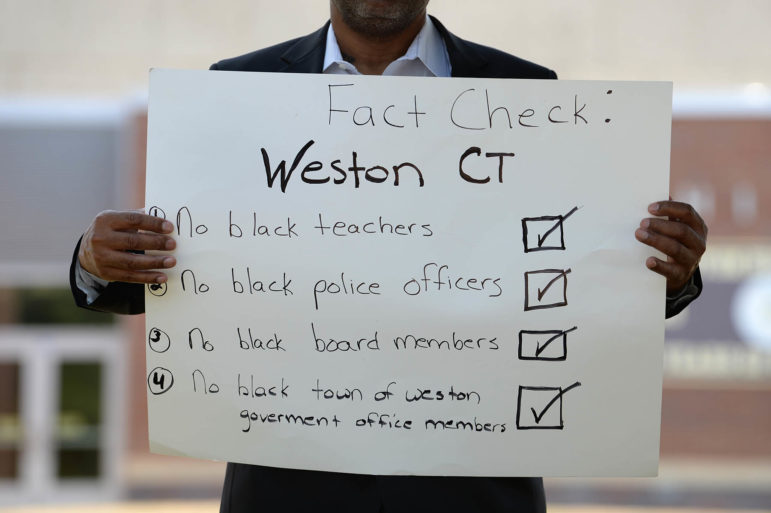 Brian Murray-Dalrymple moved his family to Weston eight years ago for the excellent school system for his five children. He is pictured in front of the high school holding a sign he made for a Black Lives Matter protest in Weston on June 7.

Recent police actions have forced Americans to look at racial discrimination at its ugliest – dying from being black. Black Americans are fed up and furious; white Americans are joining protests throughout the country. Even in Fairfield County, demonstrators have taken to the streets in affluent Greenwich, New Canaan, and Westport.

But the anger will ebb, the demonstrators will go back to work, the beaches and the bars will fill. For sure, some things may change. Police practices may come under greater scrutiny and accountability.

But can we seize this moment to change the structural inequality that is built into our everyday lives? Can we, here in Connecticut, confront the truth about our own state – that we are one of the most segregated states in the country – and begin to change?

I’ve been an educator my whole life, living daily with segregation. I taught in wealthy New Canaan, and I live in urban and diverse Norwalk. For 15 years, I taught an interdistrict class with urban and suburban teens called Border Crossing, talking frankly about issues of inequality. My husband and I were Resident Directors of the Darien ABC (A Better Chance) House, living with six Black and Latina girls who attended all-white Darien High School. I was on the Norwalk Board of Education and, later, the principal of a magnet school with students from all over Fairfield County.

Segregation surrounded me, and I devoted my career to making a difference. But how paltry my efforts were: I was chipping at a giant boulder with a butter knife.

But now, people are demonstrating in the streets. What can we do in Connecticut to ensure that this movement is not just about racism in New York or Chicago or Minneapolis or St. Louis? What can we do to change our own structures that perpetuate discrimination? How can we say, yes, I want to redesign my own backyard?

There are many actions that can take to create a more integrated and equitable society, but none of them is easy.  In fact, they are incredibly hard to do:

Welcome affordable housing into all of our towns. Share the benefits of wealth with those who have less and promote equality at home. When the demonstrations end, bring the passion for justice to our zoning. Connecticut has some of the most segregated housing in the country. Affluent towns use zoning regulations to keep affordable housing out. Opponents of change have accused zoning commissioners of “ghettoizing” their town, and segregation persists.

Demand that educational resources be allocated fairly. When the demonstrations end, bring the passion for justice to our state legislature to reform school. In 2018, Bridgeport spent $14,041 per student; Norwalk, $17,997; New Canaan, $21,480; Westport, $21,859. But where do the children of poverty live? Where do the English language learners live? Each of these groups needs many more services than a typical white, affluent child, yet city schools spend significantly less per pupil. Since our state relies on local property taxes to fund schools, poorer communities will always have less.

Encourage regional solutions to increase opportunity for all. To promote equality, we have to work, live, and learn with a diverse range of people. When the street demonstrations end, bring the passion for justice to our mayors and city. When Gov. Ned Lamont proposed regionalizing small school districts with larger ones, Connecticut revolted.  But magnet schools work.  Regional schools work.  Charter schools work. When children from different communities go to school together, barriers fall and equality rises.

Promote economic opportunity for all groups. The “good old boys” network is alive and well in hiring practices, in internship opportunities, in summer and after-school jobs. When the demonstrations end, bring the passion for justice to our

When I taught in New Canaan, my high school students could secure fantastic summer internships through their parents’ connections. They worked at television stations, brokerage houses, lawyers’ offices, and start-up companies. But many of my urban magnet school students worked in Walmart or ShopRite or not at all. That inequality continues through college and into entry-level jobs and beyond.

Connecticut has been my home for 48 years, and it has been good to me and my family.  But the promise of equality has not been met, and this “Land of Steady Habits” is highly resistant to change.

Charles Blow in his column of June 7 in the New York Times asked: “How will [white allies] respond when true equality threatens their privilege, when it actually starts to cost them something?”

I hope we answer by taking the fight to our zoning boards, the city councils, the legislature and the workplaces. I hope Connecticut is ready to say that it’s time to develop some new habits. It’s time for change.

Roz McCarthy of Norwalk has been a high school teacher, principal, and board of education member.  She currently writes for the Norwalk Hour.