Colorado lawyer: Connecticut should not make our marijuana mistake 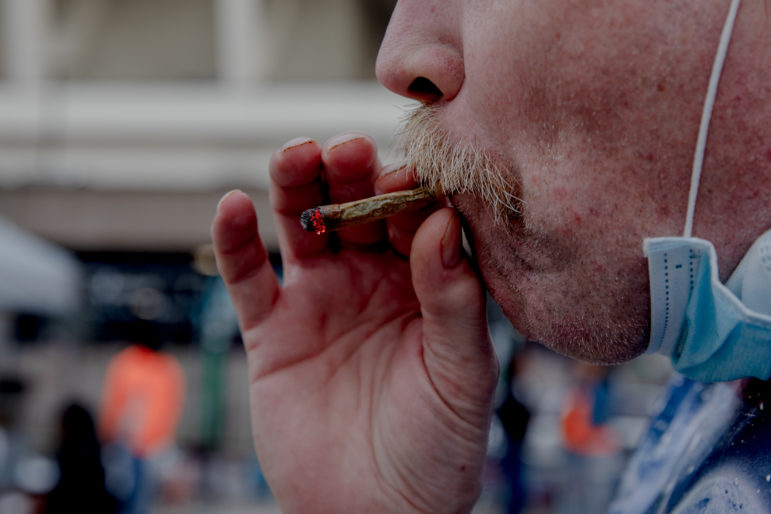 A person of Meriden, who didn't want to be named, smokes a joint. The person supported legalization of marijuana.

We started with good intentions. Colorado Amendment 64 –which I helped draft– passed in 2012 and promised to end marijuana prohibition and create a free enterprise system similar to alcohol.

I helped write Amendment 64, litigated cases to make it a reality, and helped design implementing regulations. By 2021, I should be proud of what Colorado created. I am not.

Connecticut is poised on the threshold of a similar marijuana mistake.

No true free enterprise exists in this industry, but rather an oligopoly of crony capitalists given privileged licenses. Competition and innovation are stilted. Industry exploits the centrally planned regulatory system to fix inflated and regressive pricing. Nearly a decade in, and Colorado’s “black market” marijuana is still cheaper and better than the regulated variety! And the quality of the commercial product is awful and even harmful. No wonder personal growing remains widespread.

The inmates are running Colorado’s marijuana asylum. Progressives bizarrely fawn over this criminal cabal, yet this industry genetically modifies plants at a level that would make Monsanto blush, fouls our planet with chemicals and wasteful growing systems, harms the poor and children, and is dominated by the wealthy and privileged, all while proclaiming its own brilliance to a nauseating degree. The percentage of Colorado’s overall state revenue from marijuana is miniscule. Costs for treatment, lost productivity, and other externalities of increased intoxication and addiction, plus harm to children, have skyrocketed. Colorado’s image as a beautiful mountain paradise has been defiled, and turned into a national joke. Colorado is now synonymous with marijuana, and marijuana is a net loss.

This session in Colorado, a progressive Democratic legislator, a pediatrician, proposed a regulation of marijuana potency. This modest measure was met with a disingenuous temper tantrum from Big Marijuana, which killed the bill.

Connecticut should reject commercialized marijuana. But if pot is politically inevitable, then lawmakers should at least cap marijuana potency at 15% THC, and probably lower.

Cannabis grown outdoors, as God intended, contains about 5% THC, the psychoactive ingredient. Colorado’s new marijuana is genetically modified to approach up to 100% THC. To engineer these high THC levels, corporations grow inside gigantic warehouses. Growers of this GMO eliminate natural pollination and clone mutant plants. They use arrays of large artificial lights, wasting huge quantities of energy. Massive rows of air conditioning units run, day and night. Genetically-modified indoor plants are also more susceptible to powdery mildew, black mold, spider mites, or others. Thus, growers soak the plants in chemicals, pesticides, herbicides, and fertilizers. These toxic carcinogens are either ingested by the consumer, or foul Colorado’s air and water. On a proportional basis, indoor corporate marijuana is Colorado’s worst environmental polluter. It stinks, literally and figuratively.

And this is only the actual plant flower. When corporations further manipulate it to produce concentrates or edibles, even more poisonous chemicals, more power and energy, more runoff, are used to bring the THC levels up in wax, oil, shatter, or edibles.

In 2016, I filed a class action lawsuit against one of Colorado’s largest marijuana corporations, caught using the notorious Eagle-20 Fungicide on marijuana plants. Eagle-20 contains myclobutanil, a chemical which turns into hydrogen cyanide when heated, a lethal gas. The effects of this awful gas are even more pronounced when it is concentrated and stuck into artificial plastic vape pens, which are easier to carry and harder to detect, thus have become the preferred method of consumption for teens, along with glass “dab rigs” that resemble crack pipes.

The effect of Colorado’s new marijuana is not a high at all, but either a dead numbness or a scary psychotic paranoia, especially with edibles or concentrates. Frequent users lose billions of their brain cells, and develop tolerance and craving. A stupefied and permanently addicted customer base. And children now have easier access due to commercialization. Anecdotes of teen lives ruined or even lost, from the new hyper-potent marijuana, are sadly legion.

Big Marijuana cheers on the criminal prosecution of small personal gardens, disingenuously claiming they do it the “right way.” But in fact, each and every licensee is a knowing federal criminal, along with ancillaries such as banks, lenders, investors, or advertisers. Marijuana remains illegal under Federal Law, state-licensed or not.

And this damages Americans’ respect for Rule of Law. State and local government aids and abets federally-illegal criminal enterprises, operating openly. And children see this. Studies confirm that this normalizes children to marijuana, and they are more likely to abuse it.

Connecticut should resist the well-funded pressure to follow Colorado’s mistake, and should not give a foothold to a powerful criminal lobby.

Robert J. Corry, Jr. is a lawyer based in Denver, Colorado. He was one of the chief authors of Colorado’s Amendment 64, which legalized marijuana in 2012.