Competing with Trump, a social worker speaks for Puerto Rico 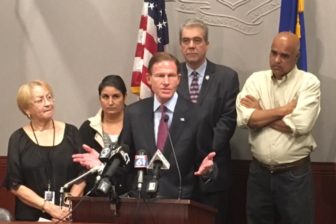 Hurricane Maria announced its landfall near Yabucoa, P.R., with a terrible wailing. Sustained winds of 155 miles per hour shredded the electric grid, flattened trees, scoured gardens and ruined the back of the sturdy cement home of two retired Hartford educators, Pedro Bermudez and Janette Hernandez.

“I still hear that sound in my head,” Hernandez said Thursday.

Hernandez said they worked for five days to help clear roads, then left on Oct. 4 on separate flights: Janette on a Southwest Air route through Baltimore to Islip, N.Y.; Pedro on a direct flight to JFK. The couple now is living with Janette’s daughter and grandchildren in East Hartford.

They turned over their island home, damaged but habitable, to a homeless nephew, a police officer and father of two young children whose family’s house was destroyed. “They lost everything,” she said.

Hernandez, whose treatment for breast cancer was interrupted by Maria, says she and her husband didn’t abandon Puerto Rico. Pedro, who was a language teacher, has applied to work as a translator for FEMA. Hernandez, who was a social worker, is doing what she can from Connecticut.

They intend to go back, when the nephew can rebuild, when Puerto Rico can rebuild. After the storm subsided, when they opened the door at their home in Yabucoa on the southeast coast of the island, an alien landscape confronted them. The lush, green trees so synonymous with their image of Puerto Rico were gone.

Too long for President Trump. 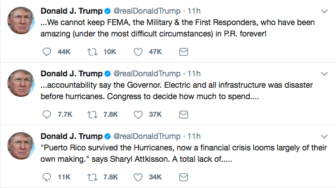 In three breakfast Tweets, @realDonaldTrump suggested Puerto Rico was complicit in its misery, noting the disarray of the island’s finances and infrastructure. At 7:07 a.m., he warned, “We cannot keep FEMA, the Military & the First Responders, who have been amazing (under the most difficult circumstances) in P.R. forever!”

The Tweets drew a rebuke at a press conference from U.S. Sen. Richard Blumenthal, a Democrat, whom Trump enjoys tweaking on Twitter as “Richie,” called the president’s final breakfast Tweet a declaration of a “mission abandoned.”

It was a decent dig, one that might draw a quick response if delivered via Twitter. Instead, Blumenthal sent a soberly worded letter reiterating the congressional call for “the appointment of a czar-like official to lead recovery efforts.”

“As someone who proudly represents a state with the highest concentration of Puerto Ricans in the United States, I stress how important it is that the federal government be there for the long haul and that crisis be managed properly for the sake of the residents and the island’s future,” Blumenthal wrote. “I appreciate your attention to this matter and look forward to your response.” 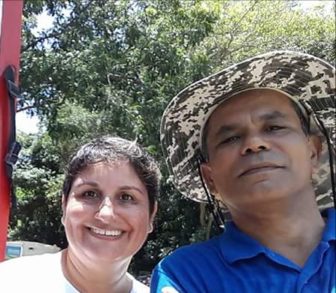 Courtesy of the family

Blumenthal said he was in agreement with Trump’s praise of the performance of first responders and medical personnel in Puerto Rico, offering a compliment to them and rebuke of the administration: “There simply aren’t enough of them.”

“I’m going to tell my story, because I have to be the voice of many of us,” she said.

She said nothing of Trump or tweets.

“I’m not a political person in the sense of who to blame. I’m not here to blame anybody,” she said. “I’m here to tell everybody we need to work together.”