Not with a bang, but a whimper. That’s how commuters seem to be moving, albeit in small numbers, back to working in-person in their New York City offices.

Leaving the comfort of your home office and Zoom-nasium won’t be easy, as many of us have found ways to be so much more productive without wasting hours commuting. But when the boss says “jump” you got to ask yourself (and her), “how high?” when you really want to say “but why?”

I hear anecdotes of some employers being persuaded (or forced?) to offer work-from-home alternatives two or three days a week just to keep their key staffers. And given the demand for talent, such options may become a deciding factor in where to hold a job.

Many of those who’ve been persuaded (or ordered) back to the office have so far opted for driving to New York City, perhaps because their expensive parking was being subsidized by their employers to entice them back. But their traffic-and- stress-free drives of months ago have morphed into post-COVID mayhem as I-95 and the scenic Merritt Parkway are back to gridlock.

So, is it time to reconsider the train or are there new alternatives on the horizon?

Much as Metro-North keeps saying it wants commuters to come back, they’re not doing enough to make their service attractive. Oh, their trains are safe enough if you keep masked-up (as required by the TSA). But with ridership crawling back from 9% (a pandemic low) to more recent weekday loads of 39%, given the reduced service the trains are getting crowded again. Really crowded.

Every day someone Tweets a picture of a standing-room-only Metro-North train, pleading with the railroad to add more cars if not also increasing the number and speed of trains (currently offering only 53% of pre-COVID service).

Granted, they just added four more daily trains between New Haven and Grand Central Terminal in rush hour. And I’ll give them thumbs up for adding a new feature to their TrainTime app to show which cars are the least crowded. 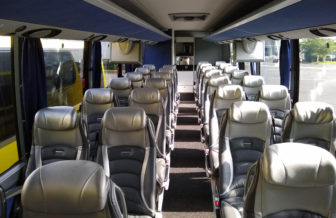 An express bus ride to Manhattan would have wifi — something Metro-Noth does not offer.

But Metro-North is about as nimble as a rock. They have a surplus of new M8 cars and plenty of OT-hungry conductors and engineers, so why not expand service more quickly? Why do anything more to discourage people from riding the rails again? Why? Because they have no competition… yet.

Sensing a business opportunity, entrepreneur Joe Colangelo (the guy who invented Boxcar, the “Air B&B of commuter parking,”) is considering giving Metro-North a run for its money, especially along “the gold coast” of Fairfield County.

Colangelo envisions a luxury motor coach offering a one-seat ride from New Canaan, Darien and Greenwich to midtown and Wall Street. His cushy fleet would have Wi-Fi (still a non-starter on Metro-North), at-seat power plugs and onboard bathrooms. So even though you may be stuck in traffic you can still be productive.

Right now he’s conducting a survey to gauge commuter interest and to collect data on destinations and travel times. But I’d predict he gives his idea a chance over the summer to have it ready for post-Labor Day carmageddon.

Tickets would be bought on their app even use benefit programs like Wageworks and TransitChek. From New Canaan to GCT would be 65 minutes, then on to Hudson Yards and the Financial District (90 min).

While Metro-North is studying and planning, hemming and hawing, this entrepreneur may launch a new alternative in just a matter of weeks. And good for him, even if he’ll be skimming the 1% cream off the top of the railroad’s heavily subsidized operation.

Posted with permission of Hearst CT Media. Jim Cameron is founder of The Commuter Action Group, and author of  “Off The Record: Confessions  of a Media Consultant“