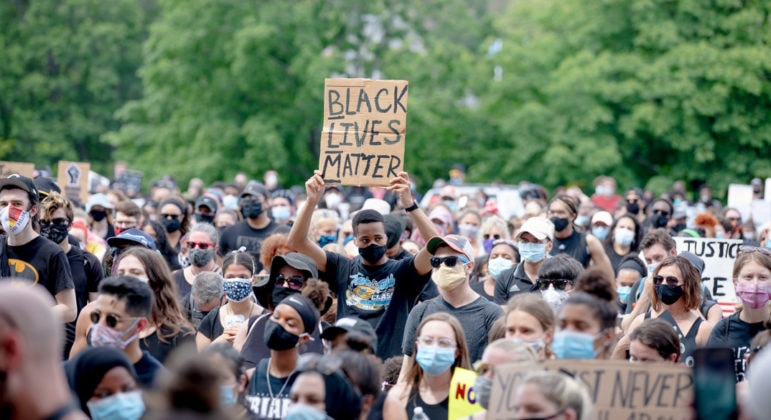 Demonstrators at a Juneteenth event at Bushnell Park in Hartford. In a year when the police killings of George Floyd and others have given rise to massive demonstrations and demands for less confrontational and more therapeutic policing, the co-responder model is gaining interest and attention.

The murder of George Floyd was unjust and must not be forgotten. George Floyd was unarmed. His unavoidable crime was something he could not control: the color of his skin. We must not let the countless people who have been killed because of their skin color die in vain. We must say and remember their names:  George Floyd, Breonna Taylor, Ryan Twyman, Ahmaud Arbery, Tamir Rice, Trayvon Martin, Oscar Grant, Eric Garner, Philando Castile, Sandra Bland.

That list just names a few of the millions of people of color who have died due to how society sees them because of their skin color.

I think that for many people it is difficult to realize how deeply rooted racism is in our society and our government.  Even in Connecticut, a mostly solid liberal state, racism exists.  We may not want to believe it, but we must. Until we acknowledge that racism exists all across our country, there will be no change.  No community is immune from racism, not in Connecticut, and not across America.

It is wrong for President Trump  to attempt to militarize these protests, because each citizen has the Constitutional right to protest, exercise their voice, assemble, and petition the government. Using police force has not seemed to suppress the protests, it has made them even more powerful. It has made people more angry and more motivated. The issue which  protesters are protesting is the fact that people of color are constantly endangered by ignorant and ill-educated people in power.

Our country is built on morals of freedom and equality, but I believe that there will be no freedom until every person in this country, regardless of race, gender, sexual orientation or background is treated equally.

Fixing the systemic racism and the ignorance of privileged people is a goal of these protests — to create a place where everyone is truly equal.  What is the solution to police brutality?  Training our police better.  Requiring body cameras on all on-duty police officers and holding police accountable for their unjust actions.  Supporting recent activism to defund the police and allocate the billions of dollars spent and reallocate those funds to  housing, education or other areas severely lacking funding.

We have to work locally, as former President Barack Obama said on Monday, June 1, “…the elected officials who matter most in reforming police departments and the criminal justice system work at the state and local levels.”  That just names a few first step solutions for our state and country. What can you and I do to help? Contact our legislators and leaders. Sign petitions. Donate money. Protest. Check our privilege and our implicit bias. Ask the uncomfortable questions and educate ourselves.