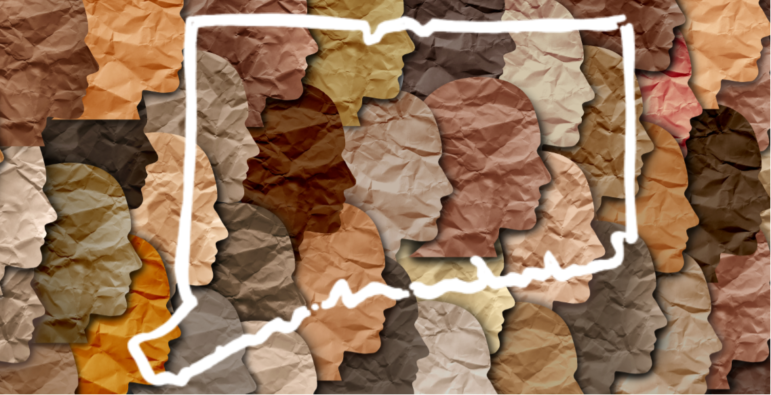 Among the headlines emanating from the newly released 2020 U.S. Census data pertaining to Connecticut is the fact that our state is more diverse than it has ever been.

Going behind the headlines, the data offers some intriguing examples of how – and where – the state demographics are changing, and how Connecticut’s changes compare with other states in our region and across the nation.

That dramatic demographic shift was most evident in urban and suburban communities:

Developed by the Census Bureau, the Diversity Index measures “the probability that two people chosen at random will be from different race and ethnicity groups.” Here’s how it works: if the Diversity Index of a region is 60%, two people chosen randomly from this region will have a 60% chance of identifying as a different race/ethnicity from each other (and thus a 40% chance of identifying as the same race/ethnicity). Therefore, a higher Diversity Index indicates a more diverse population.

Among New England states, Connecticut has the highest diversity index score, followed by Massachusetts and Rhode Island.  The Diversity Index of Connecticut increased from 46% to 56% from 2010 to 2020.

Using the Census Bureau methodology, the Connecticut Data Collaborative (CTData) calculated a Diversity Index for each town in Connecticut.  The results show a wide range when looking at town-level data. There are 22 towns with a higher Diversity Index than the state average, many of which are municipalities with larger populations, and 147 towns that have a lower Diversity Index.

All but two communities experienced an increase in diversity compared to 2010. The largest absolute increases were in South Windsor (19%), Bethel (19%), and Brookfield (18%), while slight decreases were observed in Somers (-3%) and Bridgeport (-1%). Although Bridgeport’s Diversity Index decreased by 1%, it remains one of the most diverse municipalities in Connecticut in both 2010 and 2020.

In terms of the broader population changes, of Connecticut’s 169 cities and towns, only 69 saw an increase in population during the past 10 years – 100 communities saw a decrease in the number of residents.  Connecticut’s total population did grow slightly (0.9%), but much less than the national average (7.4%) and less than our neighboring states of Massachusetts, New York, and Rhode Island.

As the designated Census State Data Center, the Connecticut Data Collaborative will assist in communicating upcoming in-depth data releases during the year ahead, providing analysis and making the data accessible through our website (ctdata.org) and online visualization tools.

The first essential step in the decennial census was gathering the data.  Next – where we are now – is receiving and then analyzing that data.  That leads directly to the final critical step:  when state policymakers and decision-makers in the public, private and nonprofit sectors determine critical resource allocations and plans for the future.  It is a multi-faceted process, now getting underway, which merits our collective interest, attention and participation.

Michelle Riordan-Nold is Executive Director of the Connecticut Data Collaborative, which has been designated as the State of Connecticut’s lead organization in the U.S. Census Bureau’s State Data Center Program for the 2020 U.S. Census. Learn more at www.ctdata.org.