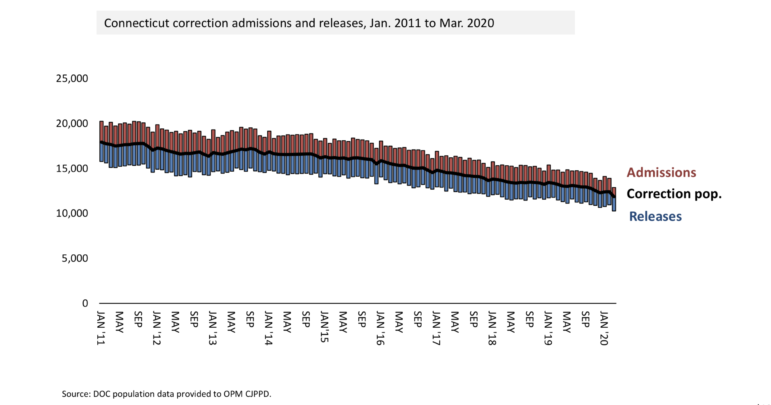 From all appearances it seems that crime politics have returned to center stage in our state for the first time in more than a decade.  In recent days an assortment of politicians have offered surprising and mostly uninformed critiques of Connecticut’s laws and policies.  I hope to add some facts and data to the conversation.

I think that it’s fair to say that former State Representative, House Minority Leader and apparent candidate for governor Themis Klarides was not considered a subject matter expert in any particular topic during her time in the General Assembly.  Case in point: Connecticut’s criminal justice system.

Last week she wrote: “Governor Lamont has continued Dan Malloy’s failed policies that have released thousands of convicts through an early-release program aimed at lowering the state’s prison population. The prison population has shrunk, but only because the state has simply let loose convicted felons, including many violent offenders who were serving time for some of the worst offenses.”

In 2020, the first year of the pandemic, a total of 5,333 sentenced persons were released from Connecticut’s prisons.  Of those, 2,763 were released before the end of their sentence.  For 2019, the pre-pandemic year, there were a total of 5,685 releases including 2,989 “early” releases (i.e. before the expiration of their court-imposed prison sentence).  In other words, significantly fewer, not more, prison releases happened during the 2020 pandemic.  The first five months of this year have seen even fewer releases: 3,022 in total with 1,513 “early” compared to the same period in 2020 when there was a total of 5,333 releases including 2,570 “early.”

It’s worth noting that these “early” releases come in different categories, parole, halfway houses, etc., but all are supervised in the community by parole officers employed by the Department of Correction.

You might ask: ‘How does that compare to the time when there was a Republican governor in charge of the prison and parole process?’

During 2010, the final year of Gov. M. Jodi Rell’s time in office, Connecticut’s Department of Correction released 20,409 sentenced prisoners into the community, four times as many as last year.  Of those, 9,374 were released before the expiration of their court-imposed prison sentence.   In 2007, the year that saw two individuals released from prison early by Gov. Rell’s parole board and DOC, later to brutally murder a family in Cheshire, a total of 22,075 people were released from prison, including 10,128 on “early” release. That’s almost four times the number of “early” releases in 2020.

Why has the prison population dropped since the onset of COVID-19?  Fewer admissions, not more releases.  During 2019 a total of 19,535 persons were admitted to our state’s prisons and jails.  During 2020 the total was 10,049.  In both years about 75% of those admissions were “pre-trial.”  In other words, those were persons arrested and unable to post bail; 25% of the total were newly sentenced prisoners.  Again, that proportion held constant before and after the onset of the pandemic.  This downward trend in Connecticut’s incarcerated population has continued since 2008. The consistent downward trend in the annual number of admissions to prison in our state has been steady since 2006.

Looking back at the Rell years:  In 2010 a total of 30,036 persons were admitted to prison.  In 2007: 34,467. Prison admissions generally track the trends in both reported crime and arrests by year, both of which have trended downward steadily since the early 1990’s. Since the onset of COVID-19 in March of last year, shootings and murders have trended up significantly in Connecticut, although the increase has not been as great as in other states and cities nationwide.  Almost all other types of reported crime have continued to follow the steady downward trend. (I will write more about that later.)

Bottom line: the prison population is and has been dropping steadily for 13 years because of fewer admissions to prison, not because of more releases.

Keep in mind that since 2013 both Connecticut and New Jersey have both experienced the largest reduction in the rate of reported violent crime of any other states.  Over the course of the eight Malloy years, Connecticut experienced the fewest murders in any eight-year period since the 1960’s.  In 2016 there were 79 murders, the lowest total since 1969, when the state’s population was 565,000 lower than today.  In 2018 there were 86 murders, the third lowest since the 60’s.

Readers might be surprised to learn that Klarides voted in favor of most reform initiatives signed into law by former Gov. Dannel Malloy.  These include his groundbreaking “Second Chance Society” bill in 2015 and both of Rep. Toni Walker’s major overhauls of juvenile justice procedures in 2016 and 2018.

I understand politics and politicians.  I appreciate the desperation that candidates feel as they scramble to find a message that will resonate. During my four decades helping to shape and implement criminal justice policy in Connecticut and nationwide I have learned the importance of facts and the danger of oversimplification.  Campaign rhetoric and promises have real and often unintended consequences. The 2022 campaign cycle will be no exception.