‘Criminalization of poverty:’ New data on women in Connecticut jails

While criminal justice reform has gained mainstream, bipartisan acceptance over the past few years, the system remains a tangle of overlapping issues—racial disparities in sentencing, felon disenfranchisement, and disproportionate rates of mental illness in prisoners, for example.

Increasingly, advocates are paying attention to the often overlooked front end of the criminal justice system, particularly pretrial detention and the use of cash bail.

Imagine, then, the inability of many New Haven families to pay a few thousand dollars to get a loved one out of jail, or the crisis caused by a family member missing even a few days’ work by spending time in jail.

Looking at these numbers, we can begin to understand why U.S. Attorney General Loretta Lynch called court practices such as cash bail “the criminalization of poverty.”

The common use of cash bail has such harsh and unbalanced effects on poor and low-income defendants that the Department of Justice recently wrote that policies that detain people simply for their inability to afford bail violate the Fourteenth Amendment.

Pretrial policies — policies determining how and why an individual may spend time in jail or another facility before having gone to trial, been convicted of a crime, or agreed to a plea bargain — vary by state, county, and municipality. Such varying policies are often highly susceptible to bias and inconsistencies, even when using practices considered evidence-based.

This patchwork of pretrial detention policies holds great power over the lives of a fluid population not yet convicted of and sentenced for a crime. Time spent in pretrial detention can affect an individual’s trial and sentencing outcomes, and their likelihood of taking a plea bargain. Spending even a short amount of time in detention can have life-long consequences on an individual’s employment, finances, education, family stability, and even the behavioral health of their children.

One key to moving forward with reforms is simply understanding how many people are in each area of the criminal justice system, for what reasons, and for how long. Beginning in the late 1970s, the United States ushered in an era of mass incarceration, during which incarceration rates grew exponentially to outpace the rest of the world; these have only begun to level off and decrease over the past decade. Studying the numbers behind criminal justice lets us understand one of the fastest growing incarcerated populations in the country: women in pretrial detention.

Rates of incarceration are still high

Connecticut has kept its incarceration rates generally lower than those of the nation, and began its decline earlier. Connecticut’s reform-minded administration would like to set our decreasing use of incarceration as a model for other states, and has launched and received funding for several initiatives specifically to reform pretrial detention.

Another set of numbers can give us a more complete picture. While the U.S. has an extraordinary number of people serving prison sentences, the criminal justice system reaches far beyond prison walls. If we look at the rate of people under correctional jurisdiction —including people serving sentences of less than a year, awaiting trial or unsentenced, or in community programs including probation and parole — Connecticut has less to brag about. Our corrections rate exceeded that of the U.S. until recently. Connecticut had a greater portion of female residents under correctional control than the U.S. from 1980 until 2008; at times, this rate increased by as much as 40 percent from one year to the next. 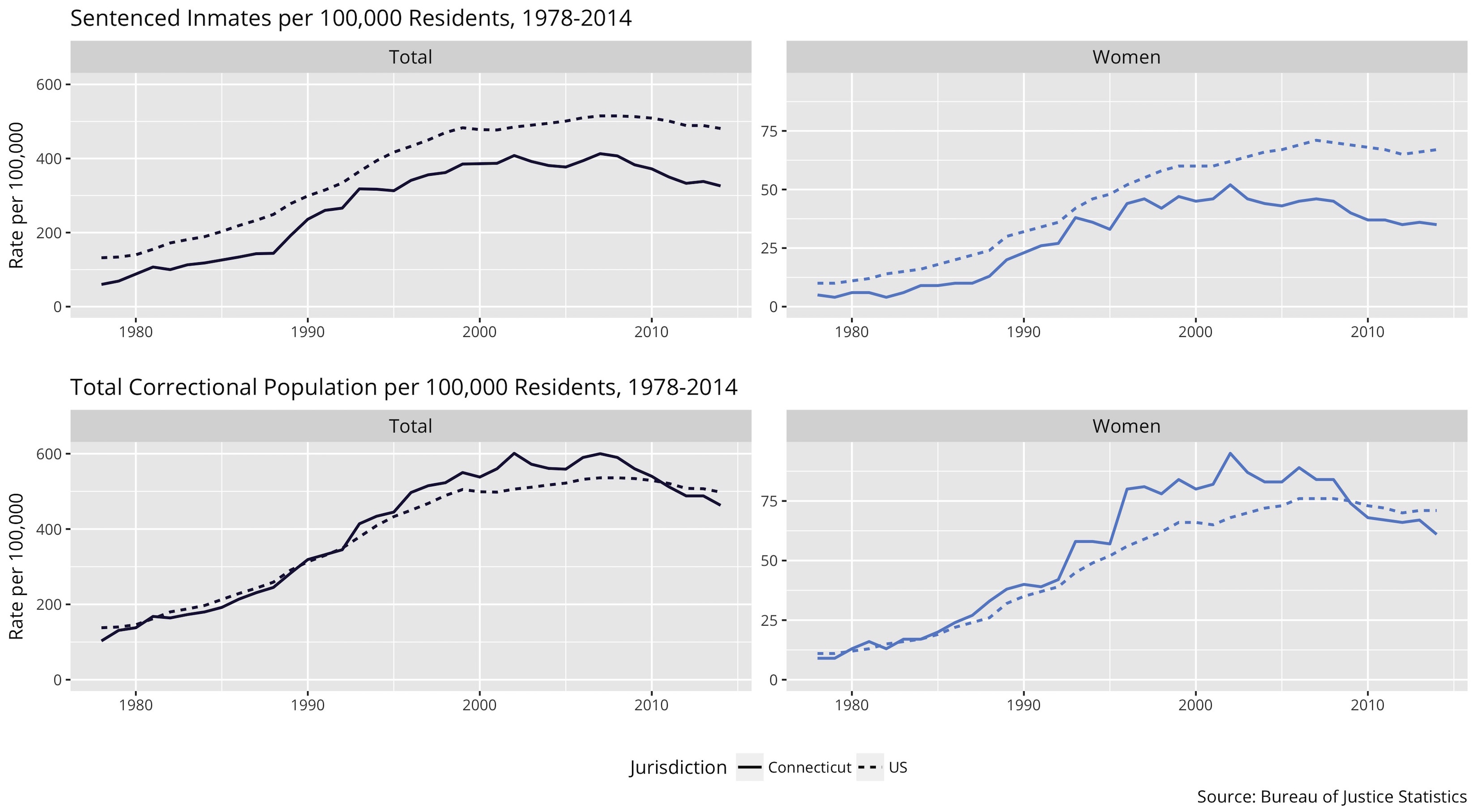 According to Vera, 86 percent of women in American jails have experienced sexual violence, 32 percent show symptoms of a serious mental illness, and 60 percent lacked full-time employment at the time of their arrest; other studies have similarly shown high rates of mental illness and exposure to trauma. Jailed women, like jailed men, are disproportionately people of color. These issues combine to create very complex needs and vulnerabilities. Imagine the difficulties, then, of the average jailed woman to pay the type of cash bail that the federal government has already ruled an unfair burden.

Given the complex financial, health, and family needs of women highlighted in the Vera Institute report, advocates should begin untangling the factors, such as inability to pay bail, that keep women imprisoned without a sentence.

Connecticut’s Department of Correction began releasing daily data on people in pretrial detention in July, with anonymized, individual-level information on age, race, gender, facility, offense for which bond was set, and bond amount, covered previously by DataHaven. Connecticut seems to be the only state to release such detailed data publicly on pretrial detention; this will hopefully become a trend among other states as well. And while we still have only a short time span of data, we can begin to see some patterns emerge.

On any given day since July 1, 2016 — the first date for which this data is public — an average of 3,348 Connecticut residents are held in pretrial detention in one of 29 prisons, corrections centers, and hospitals. Of these detained residents, an average of 342 are women held at York Correctional Institute in Niantic, the only women’s prison operated by the state.

By far the most common offense is violation of terms of probation or another form of conditional discharge; roughly one in nine men held in detention, and one in six women, are there on this charge. Dozens more are held each day for failure to appear in court. These types of charges have all been targeted for reforms in Connecticut and nationwide as relatively easy ways to keep large numbers of people out of jail when they pose no public danger.

The Department of Correction also posts data of daily population counts in correctional facilities and community programs. In line with the nationwide trend of growing numbers of women held without being sentenced, women at York are more likely than people at other facilities to be unsentenced. Thirty-six percent of the women at York at the end of 2015 were accused of a crime but unsentenced, compared to 24 percent of men at all other facilities; these shares have continued to grow over time.

One of the most potentially useful aspects of the pretrial detention data is individuals’ bond amounts. And while the sample of data available since July 1 may still be too small to discern clear patterns, we can begin to look at average bond amounts for the most common offenses. The highest average bonds are for first degree assault or robbery, sale of narcotics, and injury or risk of injury to a minor.

However, average bonds for several common, nonviolent offenses would be prohibitively high for many residents to post bail. For example, the median bond amount for violation of probation for men is $40,000 and for women, $25,250. Possession of narcotics has a median bond of $20,550 for men and $20,000 for women. Twenty-five percent of women charged with possession face a bond of more than $75,000. Even assuming the bail posted is 10 percent of these bond amounts, many Connecticut residents, particularly in cities such as New Haven, simply do not have this money to spare.

Advocates and researchers can dig deeper into this and other data to unearth more patterns, and to target areas for policy changes. The data allows for a more complicated picture than is told just by headlines of decreasing incarceration rates. Pushing for criminal justice reform does little without a nuanced understanding of the circumstances that put people in jail, keep them there, and push them further into the margins of the criminal justice system.

Camille Seaberry is Research Assistant at DataHaven, a formal partner of the National Neighborhood Indicators Partnership with a 25-year history of public service to Connecticut. DataHaven’s mission is to improve quality of life by collecting, sharing and interpreting public data for effective decision making.