Criticisms of the kneeling protest are ‘hollow, self-serving, gratuitous’

Veterans Day and Election Day are a little more than three months away.

This morning I look out of an 18th floor AirBnb apartment in Quito, Ecuador and see the majestic peak of Mount Pichincha with the capital city sprawling below, a beautiful place as any in the world to think about the meaning of the American flag, political campaigns and my fellow veterans in Connecticut.

The continuous unfolding news accounts of Haddam Selectwoman Melissa Schlag and her exercise of free speech rights by taking a knee on July 16 and kneeling on both knees at the July 30 Board of Selectmen fortnightly meeting have drawn the attention of the state and nation, with a mix of ire and support by local residents and veterans as her actions were vilified loudly by political campaigners for statewide office, and later with an additional pile on by other candidates.

Ms. Schlag’s actions and words are clear.  She is protesting the actions and deeds of Donald Trump at the Helsinki Summit with Vladimir Putin where Trump sided with the Russian leader’s denial of Russian meddling in the 2016 US presidential elections in direct contrast to the assessment and official position of 17 American Intelligence Agencies.

The yelping of the candidates calling for Melissa Schlag’s resignation and their joint attempt to stifle the exercise of her First Amendment rights because they felt she was disrespectful to the flag, to the Constitution, and to the President of the United States were hollow and a gratuitous, self-serving political campaign ploy.

I disagree with the complainers that Ms. Schlag was disrespectful to the flag, to the Constitution or to the President.  A careful reading and thorough review of Ms. Schlag’s points of view proclaim bountiful respect for the flag, veterans and the Constitution.  Disagreeing with an erratic, self-centered president obsessed with high TV ratings and imaginary “witch hunts” who governs by text messages with the attention span of a gnat is not disrespect.  It is pointing out what is obvious to the reasonable-person test.

All this reminds me of Ecuador and Capt. John “Mike” McGrath, USN (Retired).  In 1985, I received orders to report to the U.S. Embassy here in Quito as the Naval Reserve Assistant Naval Attaché for my two week annual training.  Capt. Mike McGrath was the Naval Attaché.  Military attachés report to the DIA, Defense Intelligence Agency. 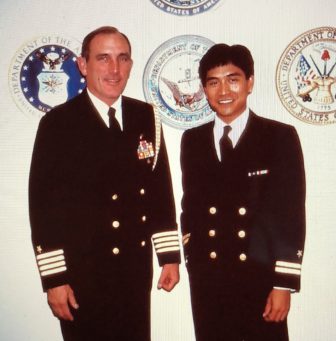 One day, while getting ready to suit up for a wreath laying ceremony, I had to help him into his (choker whites) uniform because his right arm could not be raised above his head from the beatings and torture he endured in a North Vietnamese POW camp for six years.  It was a powerful and distressing sight to see his shoulder bone stick out over his arm, but yet he carried on bravely, quietly with good humor, camaraderie and honor all these years.

Today, I remember.  And I compare and contrast the solemn moment in Capt. McGrath’s presence with a presidential candidate, now president who “does not like people (veterans) who are captured (Sen. John McCain) or “he is a hero only because he was captured” that challenges every Connecticut veteran’s sensibility and judgment of who is deserving of respect in today’s America:  Who?  A man who pusillanimously cowered behind five deferments for bone spurs and has the gall to claim “I don’t like people (veterans) who are captured,” or a woman who is defiant and silently protesting his dismissive attitude and denial of the faithful service and professional work of 17 American Intelligence Agencies?

Any candidate who wraps himself ostentatiously (“my 93-year old grandfather served in the military”) in the American flag as being more patriotic than the next person, without thinking critically, is ignorant, brutish, unenlightened and uninspiring.

For me, nothing is more affirming than to see all Americans of any political party across the country enjoy the liberties and protections that our Constitution —  the U.S. Constitution that veterans swore to support and defend through the military service they rendered to this great nation– guarantees to all.

Sylvester L. Salcedo lives in Orange.  He is an attorney and a retired US Navy veteran (LCDR, USNR) with 20 years of active and reserve service from 1979-1999.