In an article published in the Connecticut Mirror dated February 10 (“Legislators begin to push back on Malloy’s new budget”), Ben Barnes, budget director for Gov. Dannel Malloy, supports shifting tens of millions of dollars of school and other expenses to the towns.  This shift, besides being a likely economic impossibility, ignores the fact that Connecticut is one of 33 states without a local income tax option.

The towns have no means to raise the revenue apart from property tax.  Further, suggesting that a local tax on hospitals might be made available as a partial solution misapprehends how little good such an option is to towns competing for a hospital to come to or remain in their town. Hospitals proposing to bring their associated jobs and services to towns will simply demand tax concessions.

Perhaps most curious of Barnes’s statements quoted in the article is his assertion that a “low mill rate is generally indicative of a higher ability to pay.” This is demonstrably untrue.

I have compared mill rates of every Connecticut town with both the median household incomes of those town and the size of their grand lists, and calculated what is called the coefficient of determination (known as R squared or R2), which is a number that shows us how closely related the numbers being compared are. For instance, if the R squared of income and mill rate were 1, it would tell us that there is a perfect relationship between sizes of the mill rates and the household incomes of the towns. In the same way, an R squared of zero would demonstrate no explanatory relationship at all between those data.

The myth that towns with more highly valued grand lists naturally need to impose lower property taxes to raise enough money for their budgets is well known to anyone who has lived in Connecticut for more than a few years. It is, like many myths, only anecdotally true. Once we compare the size of the towns’ grand lists and their mill rates we see this: 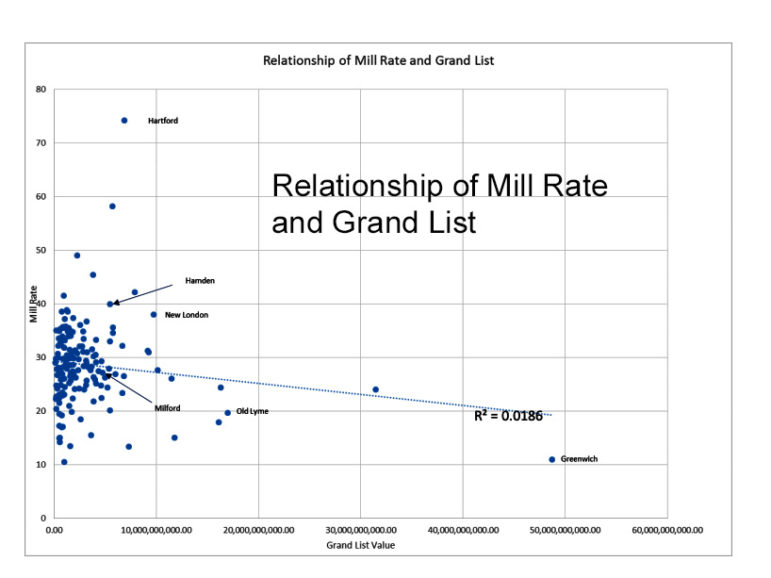 The relationship between grand list size and mill rates proves to be very close to zero. A large grand list has, with the exception of a few towns, no relationship to the size of the mill rate.

Let’s look at Barnes’s policy proposal based on “ability to pay” another way. Perhaps he means that the median household income of those towns with lower mill rates is higher, and hence, those residents can afford to pay more in local property taxes than they do now. 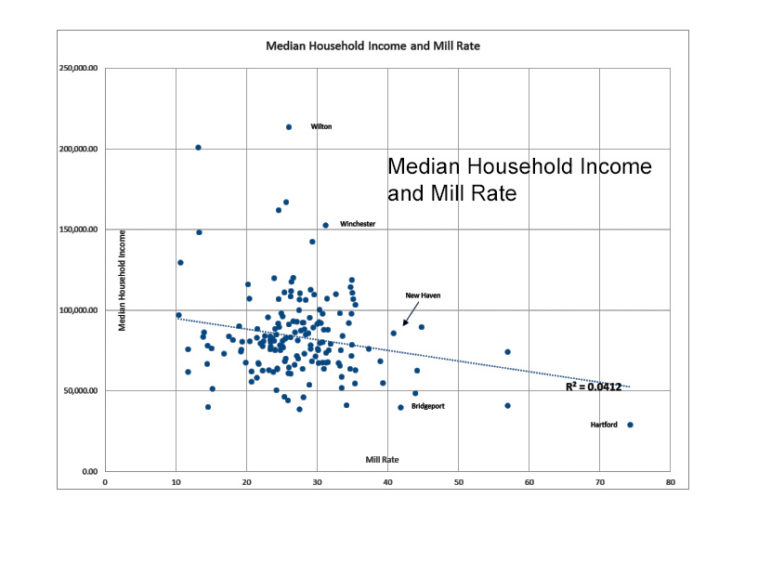 As with grand list value, income has no meaningful relationship to mill rates in Connecticut. All of the underlying data were gathered from the several towns, the Connecticut Economic Resource Center and the U.S. Census Bureau American Community Survey.

While there exist a few anecdotal examples supporting the notion that wealthier towns can support a dramatically higher property tax, the public policy argument is contradicted by the data.

Dan M. Smolnik is a tax attorney in Hamden.