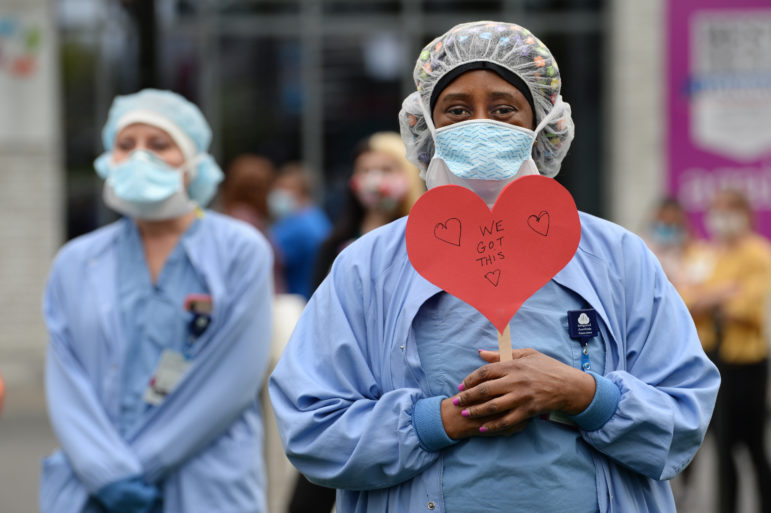 Pamelia Bogle, an anesthesia technician at Hartford Hospital, holds a reassuring heart sign at a celebration for National Nurses Week at Hartford Hospital. Gov. Ned Lamont spoke at the event to show special appreciation for the work nurses have done during the COVID-19 pandemic.

Connecticut’s constituents have had both their personal and professional lives flipped upside down since the COVID-19 pandemic hit in March. During that time we have seen our frontline workers — our hospital staff, municipal and state workers, along with many others — put their lives on the line day after day to keep all of us safe while ensuring our public services continue running uninterrupted.

I was deeply disappointed by Joe DeLong, the Executive Director and CEO of the Connecticut Conference of Municipalities, when he decided that now was the most appropriate time to attack these frontline workers and the benefits they receive for the work that they do.

What Delong conveniently left out of his editorial Lamont Must Reform Unsustainable Public Pensions is exactly how he would advise the governor to go about these pension “reforms” that “must” occur. The fact is, Connecticut has been reforming its public pension systems for many years and in many ways — all of which have ensured that public sector workers depending on those pensions receive less of a benefit when they retire.

Workers have seen an increase in the amount of time they must be employed and paying into their pensions before they are vested into those systems at all,  as well as an increase to the age they are able to retire and begin collecting those benefits. They have seen a decrease in the multiplier that decides how much money they end up receiving in their pensions. They have seen the introduction of a “hybrid” plan where some of their retirement is now invested into a 401k style defined contribution plan, which is a considerably less reliable source of retirement income that in the end costs more money to manage. 401k style plans were also never intended to be the primary source of retirement income for workers, but a tax write off opportunity for the wealthy.

We have also seen the state re-amortize the legacy debts of both the State Employee Retirement System and the Teacher’s Retirement System as well as decrease the actuarially assumed rate of return on our pension investments by more than a point. The reality is, Connecticut has seen more of these pension “reforms” than most other states have.

DeLong fails to outline in his editorial that these “reforms” have already taken place. And while many people attempt to lie and lead others to assume that public sector workers are retiring with “Cadillac benefits” unmatched in the private sector, the reality is that a worker who begins their career in public service at age 25 and works 40 years in that position receives an average of $30,600 a year.

This is considerably lower than the $76,000 average income for Connecticut residents. And this number is literally billions of dollars lower than what the wealthiest residents of our state — who continue to be taxed at lower rates than our working class constituents- make each year. Billionaires have gained nearly $1 trillion in wealth during the pandemic while working people across our state have suffered. If Mr. DeLong was truly committed to closing the funding gap our pension systems currently carry, he would be focusing on raising meaningful revenue through progressive taxation and not on cutting our frontline workers benefits.

The reality is that in calling for further “reforms” to our state’s public pension systems, DeLong is advocating for cuts to existing benefits that have been collectively bargained with the state and that workers have paid for and earned. For 32 years, governors and legislatures in Connecticut saved absolutely nothing to fund the state’s retirement system. The vast majority of pension payments today are to make up for the sins of the past. Our state’s public service workers have worked hard and played by the rules – they should not have to pay for the mistakes of politicians who failed to save adequately. Frontline workers, who have been putting their lives on the line every single day to provide our state and municipalities with the services we so desperately rely on, are being told that their ability to retire securely is no longer a priority to Mr. DeLong and the Connecticut Conference of Municipalities.

The front page of their website claims that CCM “cares” – but obviously not about the retirement security of the workers who serve the municipalities they claim to fairly represent. CCM has also come out in opposition of public workers receiving a worker’s compensation presumption for Covid related illness, meaning they also don’t seem to “care” or feel it necessary to support these workers if they were to become sick with Covid on the job and end up unable to work. They are funded by towns under the guise of “collaborating for the common good”, while at the same time advocating to cut the wages and benefits of the workers who keep these towns running safely. You simply can’t claim to support our state and it’s municipalities without also supporting the human beings who work to provide these services.