Defining defunding the police to help our community 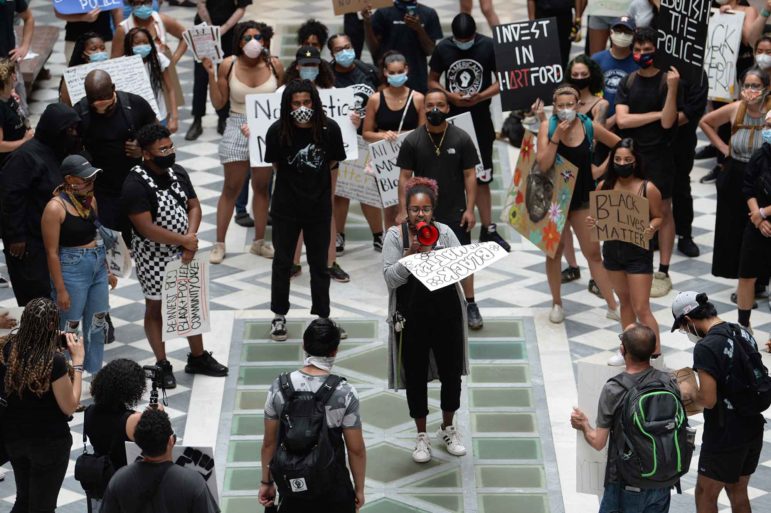 A woman uses a megaphone to be heard listing demands as protestors call for the defunding of police inside Hartford City Hall where mayor Luke Bronin and a few members of the city council were deliberating the 2020-2021 budget.

A 2014 Pew Research study reporting 52% of African Americans and 63% of Hispanics responded that “police do a good job of enforcing the law.” While the numbers are not overwhelming and likely have changed due to recent events, they do indicate that there is a level of recognition for  a need for a police force. The need for reform will have to wait for another day.

The terms “defund” and “invest” are used intentionally as defunding the police does not mean merely saving money. It means investing in our people and our communities to defeat systemic racism, to start saving one person at a time, and to redefine what our expectations of police are. A 2015 report commissioned by President Obama and led by Chief Charles Ramsey, former Commissioner of Philadelphia Police Department and recent consultant on community policing with the Bridgeport Police Department, said that an overarching goal for 21st century policing should “promote programs that take a comprehensive and inclusive look at community-based initiatives that address core issues of poverty, education, health, and safety.”

On a personal/professional level, we repeatedly have had conversations with police officers themselves who have expressed frustration at society’s expectation that they act as social workers, mental health experts, substance abuse counselors, and mediators. At the top of their frustration list is when school resource officers are asked to intervene in a school discipline issue. Naturally, this is the same frustration we hear from urban teachers (who throw in parenting as one of their expectations) who work for an institution that has been defunded for years. We can’t make the same mistake here and reduce funding without reinvesting those dollars in interventions that work..

Police are currently asked to intervene in many situations where a crime has yet to be committed.  Mental health issues, substance abuse issues, domestic violence cases, pets in trees or distress, health emergencies are all situations where a trained professional may be a better option. And they receive very little training for these activities.

In fact, if our conversations with police officers tell us how they feel about working on these issues they will generally tell you they are not trained to perform them and that they are the most difficult cases for them. So why not transfer these incidents to mental health, substance abuse, social welfare, healthcare professionals where they will be treated by skilled professionals in the field.

Unfortunately, data show Black and brown people are more likely to be treated harshly by law enforcement than white people. The question for us is not to defund the police, but to examine all the ways police are involved in people’s lives and determine their appropriateness and whether they might be handled more effectively by trained professionals and do not result in an arrest.

In our research, we have recently read about Cahoots, a partnership between the Eugene, Oregon Police Department and a community agency that has saved the city $8.5 million dollars annually with the real impact on individuals being transformational. New Orleans has recently outsourced minor traffic accidents to a private company at no cost to the city. Many police departments such as West Palm Beach, Fla. are piloting an Australian co-responding model with a social worker or substance abuse counselor who can respond to overdoses, domestic abuses, or other mental health situations.

According to the Brennan Center for Justice, over 70 million Americans have a criminal record and we know the War on Drugs has focused most of its attention on Black and brown communities. Further strengthening the treatment-versus-incarceration argument is the National Institute on Drug Abuse’s finding that $1 invested in addiction treatment results in $12 in savings on the justice system side.

The actions of young people with developmental disabilities are often misconstrued to mimic criminal behavior. For example, autistic children may be either overly affectionate, which looks like wrestling, or they can’t be touched because when you touch them they strike out; both of which they may be arrested instead of more benign and appropriate treatment.

School resource officers or SRO’s are called to intervene in all sorts of disturbances at school better handled by teachers, administrators, guidance counselors and social workers. Bridgeport Police have removed the physical presence of SROs in schools for a few years now, which has resulted in many fewer school arrests and much more appropriate intervention.

Police also are called whenever there is a health emergency; they accompany firefighters to fires; they respond to lost pets or pets up trees; etc. We have repeatedly heard the narrative backed by multiple research papers about Black people being stopped for broken tail lights, lost mirrors, simply “driving while Black” or simply “looking suspicious.” We have seen the narratives of the next step of going for their license and registration that escalate into arrests and even death like Philando Castile.

By ensuring the right professional responds, we keep citizens out of the justice system and reduce the likelihood of negative interaction with the police that sometimes escalates into criminal behavior. Our community is therefore safer. These investments can be incorporated as a team and community response alongside and in partnership with the police and will result in a safer and healthier community.

All of this results in a safer, happier, healthier community and we can agree that that outcome is not a political argument. Our communities need a police force. We just need it to look differently.