Do you feel safe riding Metro-North? 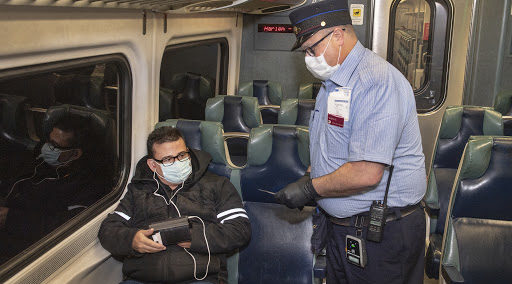 Is it safe to get back on the train to New York?  Casey (not her real name) thought so when, a couple of weekends back, she wanted to see some millennial friends in Manhattan for brunch.  But boarding the Saturday morning train she immediately started to worry and texted me.

The train was jammed, she said.  Very few empty seats.  No way to “socially distance” and many people were not wearing face masks.

Looking around, she saw large groups of NY Yankees and NY Rangers fans.  Sure enough, both teams had home games that afternoon. The fans were tailgating their way to the fun, already drinking (heavily and openly) by 11 a.m.

Metro-North claims it’s doing everything it can to attract riders back, but this was just the opposite.  The railroad knew there were two major sport events that day, so why not schedule extra trains, giving people room to spread out?

The conductors didn’t call out the non-mask wearers, didn’t ask them to cover their faces and didn’t offer them free masks.  They allowed them to break the law without so much as a warning.

Forget the latest guidance from the CDC:  masks are still required on all trains and planes by order of the TSA.

Sure, vaccination levels in Connecticut are rising.  To date 50% of the state has received full dosing.  But something told Casey these tipsy fans weren’t wearing masks because they’d had their shots, but because they just didn’t care.

Casey filed an online complaint with the MTA Police, hoping they would meet the incoming train at 125th Street and enforce the law.  No response.  A complaint on the Metro-North website generated a boilerplate response but no follow-through.  And a Tweet, detailing her discomfort brought a tepid reply apologizing for “any unpleasantness” during her journey.

Unpleasant, for sure, but also potentially lethal.  The mask rules are there for public safety.  That’s a Federal rule with fines  of $250 to $1,500. Those not wearing masks should have been kicked off the train.

Since the pandemic began, weekday ridership on Metro-North has been crawling back to about 25% of pre-COVID numbers, but on weekends almost half of the old ridership is back onboard.  The trains are getting crowded and more service is needed now.

While weekday commuters tell me mask compliance is almost 100%, it’s the weekend warriors, partying and carousing, that are not following the rules.  And the railroad seems to not care.  They run PSAs but don’t enforce the law. Are they that desperate for customers?

Last fall the railroad unveiled a new virus-zapping UV light air filter system to much acclaim, but it’s only operational on a handful of train cars. Why?

Their TrainTime app added functionality to advise passengers waiting for trains which cars were the least crowded.  It’s working on the LIRR and NY sections of Metro-North, but not in Connecticut. Why?

Every night the railroad sprays disinfectant in the interior of all railcars even though research shows that there’s only a one in 10,000 chance of getting the virus by contacting an infected surface.  It’s airborne transmission that presents the real danger.  And that’s why masks will be with us for a while longer in enclosed public spaces.

New York City Mayor Bill de Blasio wants to re-open the city on July 1.  But riders are not coming back to Metro-North… some because they don’t have to (as they prefer to work from home), but many others because the railroad is still making them feel unsafe.