Does Gov. Lamont have the courage of his convictions on climate change? 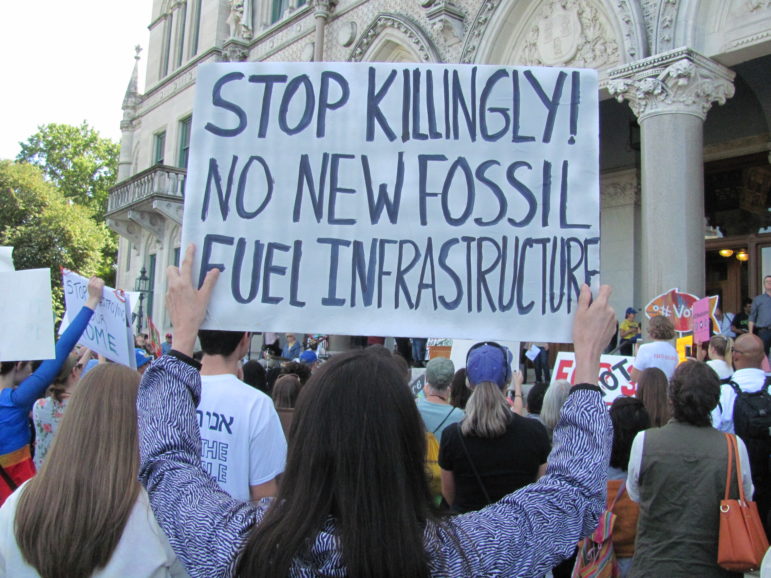 Protestors outside the Capitol in 2019 opposing the Killingly power plant project.

“Those who think we are powerless to do anything about the greenhouse effect forget about the ‘White House effect.’ As president, I intend to do something about it.”

These were the words spoken by George H.W. Bush roughly 32 years ago during the 1988 campaign.  And these words were absolutely clear-eyed in their call for courageous executive action in light of the climate crisis.  Unfortunately, whether it was distraction or giving way to crushing pressures from entrenched or monied interests, George H. W. Bush didn’t take enough of the bold action he knew was necessary.

Perhaps, he could even be excused for not doing so.  It was a new issue to many in the public and in public service, (though many scientists and energy executives had long been conscious of the problem). We had not yet entered the era of yearly record-breaking weird weather where the visceral impact of climate change becomes all too real. We were not getting dire warnings from U.N. climate scientists that we have roughly 12 years to dramatically change direction on burning fossil fuels.  We had not yet experienced one of the biggest social movements the world has ever seen out in the streets begging for leaders to take urgent and meaningful action to confront the climate crisis.  So maybe, just maybe, we can give George H.W. a pass for failure to take the action to match his words 32 years ago.

But are we really being asked now, 32 years later, when the terrifying scope of the crisis is all too clear, to accept that our governor can sit on his hands while another new fossil fuel power plant is built in Connecticut? A plant which will spew 2.2 million tons of carbon dioxide, (along with methane and other pollutants), yearly for decades; a plant which is the second in the same lower-income town in a county which already has the highest asthma rate in the state; a second plant which is in close proximity to both elderly care facilities and the elementary, middle, and high schools both my children will attend? Are we supposed to applaud the governor just for saying  “I don’t want to build Killingly,” energy center even if he takes no meaningful action to halt the project?

To be fair, this statement by the governor does show good intent. Many of us have also had a good intention to lose 15 pounds in the New Year.  Unfortunately, the governor can no more fight climate change and meet his own stated climate goals by continuing to stand on the sidelines while new fossil fuel power plants are built than we can drop 15 pounds while eating more and exercising less.

This is not rocket science.  What makes this all the more inexcusable and embarrassing is that while it may be questionable whether George H.W. Bush would have had the support of his constituency, the people of Connecticut who voted in Lamont are by and large very much ready for leadership in tackling this problem.

Unfortunately, regardless of the governor’s expression of reluctance about the project, and the Commissioner of DEEP, Katie Dykes, stating clearly that natural gas” is not a ‘bridge fuel,’  it’s a fossil fuel,” ,we still seem to only be getting only finger-pointing between DEEP, ISO New England, the Siting Council, and the governor’s office.

Why is it that governors in other states such as Washington’s Jay Inslee seem to have the intestinal fortitude to let their actions match their words when facing many of the same countervailing pressures, while the governor of Connecticut feels he can skate by on good intentions?

It is time to stop passing the buck. The governor knows the time for action on climate change was yesterday, but in lieu of that we will have to settle for today. Let your legacy be that of the leader in Connecticut who not only says like George H.W. Bush that he intends to do something meaningful about climate change, but who shows he actually has the guts to do it.