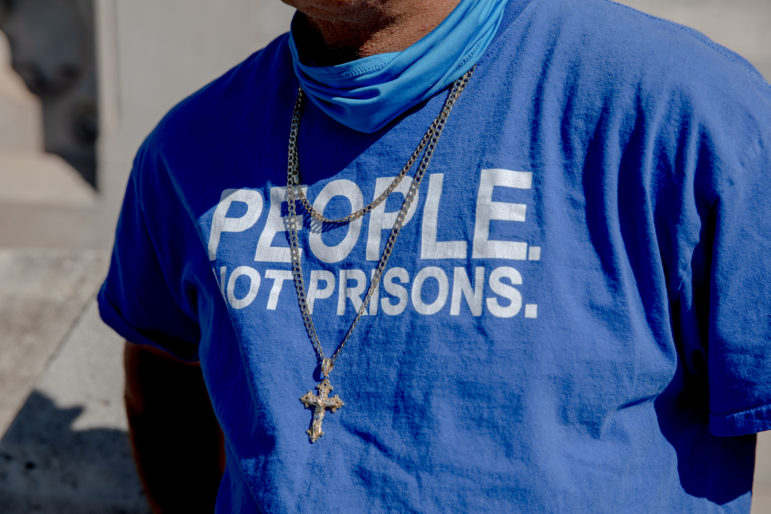 Bryan K Sullivan, of Hartford, waits for a protest to start at State Capitol. "Every time I try to find housing, I'm limited because of an offense I committed 25 years ago," said Sullivan, who was released from prison in 2019. He said he has a sense of duty to make changes in the criminal justice system so people in prison can smoothly readjust to society after release.

While the Connecticut General Assembly has a number of progressive victories to celebrate in recent years — such as the abolition of juvenile life-without-parole sentences for prisoners under 18 — the state still lags far behind the national curve in enacting truly compassionate criminal justice reform.

Connecticut currently has one of the worst parole eligibility rates in the country, with only 15% of the prison population even able to be considered for the possibility of parole. This rate is 2 to 3 times lower than traditionally conservative states like Kentucky, Texas and Tennessee. Young adult prisoners ranging from the age of 18 to 25 (an age range known to developmental psychologists as “emerging adulthood,” make up 10% of the general population but compose 21% of individuals admitted to adult prisons throughout the country.

In Connecticut, 85% of incarcerated individuals in this age group are disproportionately people of color.

A bill that sits before the Connecticut State Senate has the potential to rectify these troubling trends. Senate Bill 978, An Act Concerning Parole Opportunities, would provide a path for parole to prisoners serving long sentences for crimes they committed between the ages of 18 to 25.

Crimes committed during this age range are fundamentally different from crimes committed by mature adults in both their cause and nature. We must ensure that our laws treat them as such and give offenders the incentive for rehabilitation.

Neurological and psychological research has shown that individuals do not complete development of key parts of the brain (notably the frontal lobe and the dorsolateral prefrontal cortex) until after age 25.

This type of data has been cited in Supreme Court and Connecticut rulings on juvenile offender laws and, not coincidentally, also aligns with statistics that show rates of criminal behavior drastically dropping right at the age of 25 — the end of “emerging adulthood.” Many developmental immaturities cause “emerging adults” to be uniquely susceptible to social pressures, prone to impulsive decision making and acutely affected by past childhood traumas, circumstances that are known to promote crime.

Essentially, these offenders still have the minds of adolescents, though they’re categorized in society as adults. Unlike crimes committed by mature adults, “emerging adults” almost always age out of this temporary tendency for crime and are especially malleable to rehabilitation and growth.

The unfortunate reality, however, is that because of long sentences without possibility of parole, they are often prioritized last for education, counseling or other rehabilitative programs. As one Louisiana prison official rationalizes, “We don’t want to put someone [in programs] who has 60 years [remaining on their sentence] instead of someone short term. Someone with 60 years will have forgotten what they learned when they get out.”

Young adult prisoners are also often segregated and isolated for long periods of time under the pretense of protecting them from abuse from older prisoners. This isolation only compounds the general lack of rehabilitation for young life-without-parole prisoners, leaving them uneducated, prone violence and gangs and with serious, lifelong mental health deficits.

There is already great precedent for this bill, both in and out of Connecticut. Similar bills have been implemented in at least six other states with strikingly low recidivism rates for prisoners released in California, Illinois and DC.

Even in Connecticut, we are already making progress through the TRUE program at the Cheshire Correctional Institution, designed to mentor prisoners between the ages of 18 to 25. Clearly, our state already recognizes the unique need to rehabilitate young adults in this age interval. We must take the next steps to do so through Senate Bill 978.

As a resident and student in Connecticut, I’ve had the opportunity to learn about the stories of prisoners and families of prisoners across our state, through outreach to local advocacy organizations or tutoring sessions with young New Haven students. Through these conversations, I’ve realized just how close countless young adults in Connecticut can come to making a fatal mistake that could put them behind bars for the rest of their lives.

Passing Senate Bill 978 would not diminish the severity of their crimes. Instead, this bill would acknowledge their humanity and their capacity to grow and to give back to their communities, as opposed to ripping them away from their potential based on a few poor decisions at a young age.

Josh Guo is a legislative fellow at Yale College Democrats.