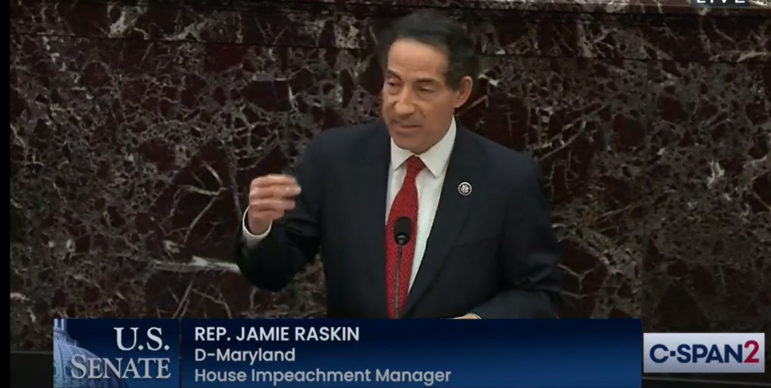 As Gandalf exclaimed to Saruman in Lord of the Rings (the movie version) when he learned of Saruman’s evil doings: when did you “abandon reason for madness?” So, too, did the Democrats when they launched the second impeachment trial (and arguably the first as well). Madness may be too strong a term, but emotion (primarily vindictiveness, payback and vengeance) overwhelmed reason when the hastily assembled articles of impeachment were prepared and delivered six days after the Jan. 6 insurrection.

As I have noted previously, the articles as written boiled down to a charge of “incitement of insurrection” with little evidence to back it up. The actual content of the articles themselves, after removing sponsor names and line numbers, etc., consisted of a mere 566 words (the recommended op-ed length!) which, with normal sized font  and margins  , is only about a normal length page. The articles as written specifically tie the Trump speech of Jan. 6, (where he told the crowd ‘‘if you don’t fight like hell you’re not going to have a country anymore,’’) to the insurrection: “Thus incited by President Trump, members of the crowd” proceeded to the Capitol, breached and vandalized it, and among other things “killed law enforcement personnel.”

Building the case for incitement on the speech was a mistake as the plain text of the speech and video do not support that – not to mention that rioters did not kill anyone. Officer Brian Sicknick appears to have died the next day (Jan. 7) from a medical condition. If the Democrats had waited to gather and examine the evidence and not react emotionally they could have built a legitimate case against President Trump. Instead, they forged quickly ahead intent on payback to a man they despise and have despised for more than four years. Obviously, aware that they could not achieve the votes in the Senate (67) for conviction — even before the impeachment was started — they went ahead anyway in order to place an indelible and unique stain on Trump’s unique record: a double impeachment – the first in American history. Take that you Orange SOB!

And then the House Democrats did not begin the actual process until after Trump left office, rendering the process unconstitutional – although there is disagreement among legal scholars on this. For me, a plain reading of the language in Article I of the Constitution could be unclear: “Judgment in Cases of Impeachment shall not extend further than to removal from Office, and disqualification to hold and enjoy any Office … under the United States.”

The question in reading this, is whether the second part of this clause (enjoyment of office in the future) extends from the first part (removal from office) or is independent of the first part e.g. removal from office. Some legal scholars point out the precedence of what happened in prior proceedings (impeachments have occurred in the past in the U.S. to non-presidents after the person left office) and the framers based their understanding on British common-law where post-office impeachment was acceptable.  This view, for me, could be persuasive if not for the other key impeachment provision in Article II of the Constitution: “The President, Vice President and all civil Officers of the United States, shall be removed from Office on Impeachment for, and Conviction of, Treason, Bribery, or other high Crimes and Misdemeanors.” This article refers to the present state of things.

“The” president during the impeachment trial was Joe Biden. Apparently, the Chief Justice agreed with this view since he declined to preside over the trial as is required.

An interesting note is that it seems undemocratic to prevent a person from being voted into office in the future by “the people.” If the people, aware of the faults of the candidate in question, wish to vote for him/her anyway (people with known faults get voted into office all the time of course) – how is the central government legitimate in preventing that? Even if the founders meant that to be, it does not seem right.

In any case, politics such as they are, the Democrats moved forward with a prosecution based on emotionally-charged video scenes of the breach with the mayhem and assaults and near misses with lawmakers. But as powerful as the videos were, they were not relevant to the actual charge of incitement as linked to Trump’s speech. We all know that terrible things happened on that day. Many people were further convinced by the showing of these videos, but they don’t prove “incitement” especially considering the evidence that has arisen over the last few weeks that the insurrection was pre-planned. I do not believe that a reasonable, objective person can conclude that Trump’s speech contained words that caused the insurrection as the House Managers struggled to show.

However, I did not realize that once the written articles are presented that the prosecution is not limited to those charges. How foolish to forget that an impeachment is just a political spectacle dressed up as a court proceeding – in this case, with a senior member of the prosecuting party presiding (Democrat Sen. Patrick Leahy) and the victims (Senators) serving as the jurors! So, having exhausted the incitement argument, the House Managers wandered into the area where they should have focused to begin with.

What was Trump doing from the time of his speech until the insurrection was in full-blown mode with calls to the President coming from Congress into the White House? When asked about this topic by two Republican Senators, his defense team did not have an answer and blamed the prosecution for not having done enough investigation (which they apparently hadn’t, but is irrelevant to the question). Defense attorney Michael T. van der Veen could only protest like a spoiled child that “The House managers have given us absolutely no evidence one way or the other onto that question and that it was sign that the House Managers were somehow derelict.

Earth to Van Der Veen: this question concerns your client and you are expected to know about what he was doing. I suppose Van der Veen deserves some credit for not lying or making something up. But this was damning and is where the House Democrats should have built their case from the beginning, especially as the evidence has been coming out recently that President Trump was aware of (and probably gloating about) the insurrection. This “it’s all about me” part of Trump’s essence is truly disgusting.

Treason is where the House Managers should have focused the articles of impeachment and the prosecution.

Article III, Section 3, Clause 1 of the Constitution defines Treason against the U.S. as consisting of “levying War against them, or in adhering to their Enemies, giving them Aid and Comfort.” Sitting by while an insurrection is occurring by one’s own supporters sounds like aid and comfort to me.

Much more will likely be coming out about what Trump knew and what he did or did not do. I suspect it will not be in his favor. There may be some good arguments against it being treason, but it is certainly a sound basis to bring an impeachment case. But politically, none of this matters, the Democrats got what they wanted – the indelible stain of a double impeachment against Trump.

Conviction was never the goal. The question is whether the impeachment effort will be worth a potential backfire on Democrat’s fortunes overall. Impeachment did not seem to hurt Bill Clinton’s post-office success, but it did hurt the Congressional Republicans that impeached him.

Alan Calandro is the former Director of the General Assembly’s nonpartisan Office of Fiscal Analysis and a former Chief of Staff for administration and finance at UConn.

Three fallacies and the truth about vaccines