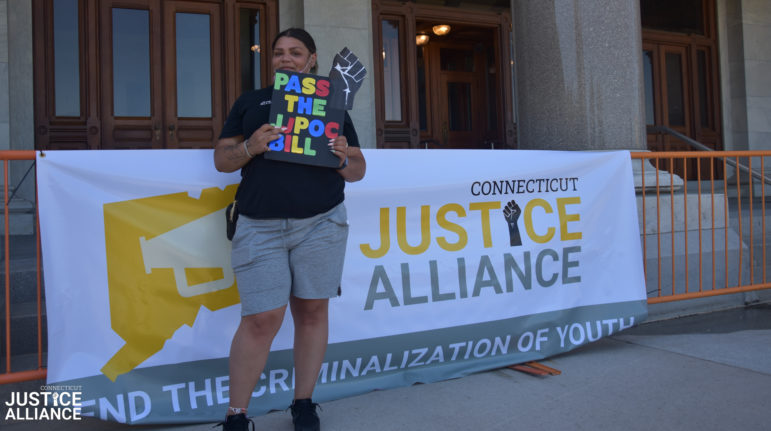 During the 2021 legislative session, the Connecticut General Assembly (CGA) decided we should stop arresting children — kind of.

This year, the CGA passed a bill (the JJPOC bill) that raises the minimum age of arrest from 7-years-old to 10-years-old. Previously, children as young as 7 could be charged and arrested in Connecticut. In most cases, these children were arrested for misdemeanor charges which were often later dropped.

As a mother of a 7-year-old and someone who was arrested as a young person, I know firsthand how damaging the juvenile system can be in its treatment of our youth. It breaks my heart to think of the children in our state who have been subjected to the inhumane treatment and trauma of an arrest. We must continue working to raise the floor for when a young person can be arrested. According to the United Nations, the minimum age for court involvement should be at least 12. Let’s start there.

The reality of the situation is, we make a choice when we choose to arrest a young child instead of utilizing other avenues such as rehabilitation programs to deal with their misbehaviors — and it causes that child harm. For a young person, even a short stay in a detention center can have long-lasting negative impacts on their health and wellbeing. It is common for detained youth to develop post-traumatic stress disorder and depression after being released from detention. A young person who has been involved in the legal system has a higher likelihood of committing self-harm than their peers.

As of January 2021, only six states in the United States, California, Delaware, Maine, Massachusetts, Mississippi, and New York, have set the minimum age for delinquency adjudication at 12. More states have proposed bills to do the same, but have yet to ratify them. This makes our country and our state an outlier compared to much of the rest of the world. The United States prides itself on being a crusader for human rights yet continues to impede on the rights of its citizens at home. If we want to say we are a global leader, our laws and policies should be crafted to reflect that.

No 7-year-old or 10-year-old can fully comprehend the consequences of their actions. At that age, a child’s brain is still developing, making it more likely for a young child to act on impulse. In fact, according to a report by Connecticut Voices for Children that examines alternatives for children under 12 in the Connecticut juvenile system, “children below the age of 12 (due in large part to their still-developing brains) possess neither the logical, emotional or moral reasoning to be held legally responsible for committing an offense under the traditional justice system.”

We do not need to involve our young children in the courts and legal systems to deal with misbehavior. Instead of arresting kids who commit acts of wrongdoing and institutionalizing them at such a young age, we must prioritize positive, effective, and rehabilitative forms of interaction that focus on addressing the root causes of behaviors. Youth Advocate Programs Inc. (YAP) has a promising program model recognized by the National Institute of Justice and the Office of Juvenile Justice and Delinquency Prevention (OJJDP).

YAP’s programs prove that youth justice programs can be safely and effectively served in-home and community-based settings. We have the money to fund alternative programs such as YAP and other programs that address root issues of misbehavior — it simply comes down to prioritizing what our state chooses to invest in: our children and youth or incarceration?

On average, Connecticut spends $750 per day to incarcerate a young person. That’s $273,750 per year per child that could be used to fund professionals who know how to de-escalate situations and investigate their root causes. It’s time for Connecticut and the United States as a whole to be more proactive when it comes to distributing resources for preventative solutions to under-resourced communities.

Instead of policing children, let’s give them the tools they need to be successful. CTJA’s Invest In Me CT Campaign outlines a few ways Connecticut can begin to correct this disparity. First, the state should remove all youth under the age of 18 from prison-like environments within the adult and juvenile justice systems. Next, state leaders must fully invest in individualized activities, programs, and resources to better serve the community. We can start by reallocating funds from detention centers, and from the closure of facilities like Northern Correctional Institution, to fully fund schools and programs that allow children to learn, grow, and thrive. Introducing school psychologists who can work with families to solve behavioral issues and issues of resource insecurity can help lower the rates of justice system involvement.

There are many other avenues we can explore that prevent the criminalization of children and youth. Implementing mentoring programs and creating emotional support groups have shown to be highly effective at reducing contact with the legal system. Children deserve to be cared for in a loving environment where they are allowed to make mistakes. There are no excuses for traumatizing a child, especially when we have alternatives we can pursue.

Connecticut raised the minimum age of arrest this year from 7 years old to 10 years old, but this does not mean the fight is over. I’m grateful for the legislators who pushed and advocated in support of this provision in the JJPOC bill. All the organizers and individuals who stood up in support of Connecticut children and secured this hard-fought win. I am relieved for the very young kids who will no longer be subjected to the trauma of the justice system, but 10 years old is still too young.

We raised the age of arrest! Next year, let’s do it again.

Sage Ruiz Grady is a Justice Advisor with the Connecticut Justice Alliance.