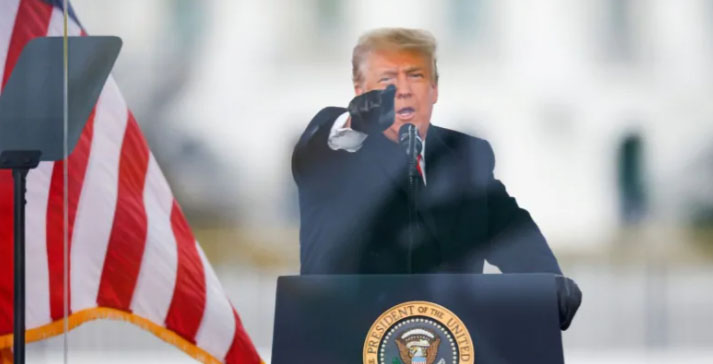 Truth and objectivity should be what brings us together, not pushes us apart, but at least for the last four years such ideals have been willfully tossed aside in order to engage in the war of words. Obviously, Trump is the main offender, but he is but one politician (granted the “biggest” politician) and he does it more offensively and with less sophistication than most practiced politicians. (No, apparently he can’t learn from his dumb mistakes.)

We expect politicians to play fast and loose with the truth. But his influence is much smaller in comparison to the vast number of “legitimate” officials/people who have sold their legitimacy sometime around his election in 2016. In the Trump vs. The Media/Establishment War – the losers are us – the people. The problem with selling your legitimacy is that once it’s sold you can’t buy it back.

Consider the “incitement impeachment” currently underway. To be clear, my analysis that follows is largely based on the evidence presented in the articles of impeachment and the known transcripts of speeches and a phone call by Trump. I also listened to the impeachment debate, but as always I am leery about the political posturing of the parties and did not find it substantively helpful. This analysis does not include the many speculations that have been made or will be made – some of which may turn out to be true. I am sticking with just the hard and known facts at this point unless or until more is established.

Since what I heard in the news snippets after the horrific mob stormed the capitol didn’t seem inciteful to me, I painfully took the time to watch and read the entire transcript of the one hour plus speech Trump gave at the rally before the march to the Capitol on 1/6/21. You can watch and read it for yourself here at ABC News. I could not find anything that seemed out of the ordinary politician “rally the troops” with rhetorical flourishes tool box. It was the same as one usually hears.

Some say those words lit the match to the simmering mob while others say that D.C. would be a ghost town if no political speech could use terms such as Trump used. Granted the stakes and the background were completely different – Trump repeatedly claiming the election was rigged, stolen, etc. Those are serious charges. The context was graver, but most of the media — where we get our information from — mostly downplayed him and his lawyers as much as they could after the election.

Despite partisan claims now, I submit that almost no one foresaw the violence. Rallies occur in D.C. and other places all the time. It’s normal to have rallies. Who would have thought some crazies would actually smash and break into the Capitol and among other things kill a policeman! I could see a charge levied that a “reasonable” person at the top should have been able to foresee violence. I’d be ok with that as a justification for impeachment – I’m not sure I would be comfortable with conviction though.

Of course, impeachment is not justice. Impeachment is political. There is a reason why the last two impeachments (Clinton, Trump) were party line votes. You can impeach a president for a hangnail if you have have enough people on your side. So in that sense I am not concerned about impeachment. Politicians generally do what’s good for the party machine or their political fortunes. But from a justice or “what’s right” perspective, I do not see anything he said that caused the riot/violence – nothing that actually lit the match.

I cannot seem to find an estimate of the numbers that attended the January 6 rally other than it was in the “thousands.” Only a relatively small portion of these attendees breached the Capitol (but there was not an insignificant number of “breachers.”) Trump had a lot to do with encouraging people to come to the rally and march to the Capitol. But watching him give that speech seemed like most every other speech he has given. What happened at the Capitol is a classic case of a gathering of people turning into a mob and getting out of control and/or some people who actually came with that agenda. Again, maybe Trump orchestrated the entire Capitol breach, but at this point there is no evidence of that. But more evidence will be available in the coming days and could change this analysis.

You can read the five pages of the articles of impeachment here at CNN. The main Trump high crime and misdemeanor was that he “incited violence” against the U.S. Government. The evidence cited was that he disputed and encouraged dispute of the election – “We won it by a landslide,” etc. (not a crime in any way or the first time a politician has claimed the election was stolen from them – Hillary in 2016 anyone?) The apparent smoking gun evidence in the articles by Trump: “If you don’t fight like hell you are not going to have a country anymore.” That’s pretty much it. I won’t waste my time doing a LexisNexis search to show how many times politicians use the phrase “fight like hell.”

There is also a passing reference in the five pages to the call Trump made to the Georgia Secretary of State Brad Raffernsperger (with rooms filled with people listening, and which someone illegally recorded,) where the articles say Trump “urged” Raffernsperger to find enough votes to overturn the election and threatened him.

I also read this transcript and there is some pressure being applied but mostly to not ignore the evidence that Trump and his lawyers who chimed in claimed he had. That seems reasonable to me. If you feel you have been wronged wouldn’t you want to call and make your case? The “threat” in the one hour call according to the transcript was that Trump said Raffernsperger could be subject to criminal liability for not finding allegedly illegally destroyed ballots to block investigators. “That’s a criminal offense” said Trump. If it were true, Trump would be right.

The other “threat” is political in nature. That many Georgians would not support Raffensperger after the role he played.  Trump: “A lot of Republicans are going to vote negative, because they hate what you did to the president.” Distasteful, but not really a threat and even if Trump suggested fighting against him (which he didn’t) – that is politics as usual, the party machine in its usual motion. Nothing unusual there.

I think this impeachment is about the last four years of vitriol and fighting and hating Trump and getting it out of one’s system: Sending him off with the singular mark of the only president to be impeached twice and to negate him running again. Feel’s good – feel’s vindicated. It’s about having the last word. I’m pretty sure Trump does not need anything else to separate him from all other presidents and I can almost guarantee that he will not run and almost assuredly will not win again. There are way too many people in the middle (actually across the spectrum) that are just sick of him and the constant drama.

I am not going to try to dissuade anyone from hating Trump – he deserves a lot of it. I understand where you are coming from. But don’t mix the apples with the oranges (no pun intended).  Always remember that you could be the one being charged with something and you would want fairness in your final disposition.

Alan Calandro is a former Chief of Staff for administration and finance at UConn and the former Director of the General Assembly’s nonpartisan Office of Fiscal Analysis.