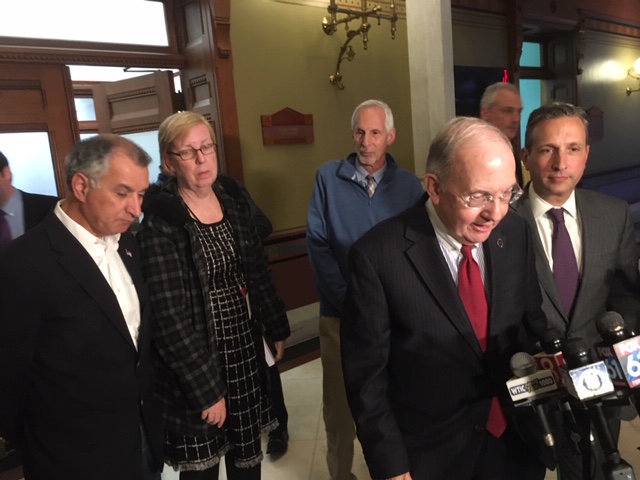 In spite of a having a supermajority, Senate Democrats informed Gov. Ned Lamont that they will not support his scaled back plan to place tolls — or in Lamont’s Orwellian term “user fees” — on fourteen bridges. This is after the media, multiple civic groups and Connecticut’s corporate leadership have been cheerleading for tolls for the past year. Why?

It is because nobody believes anything Lamont or our institutions tell us. Lamont’s election victory was due to his promise to only allow tolls on incoming out-of-state trucks. Had he been honest about his real plan to place tolls on Connecticut drivers, he would be comparing the nose of first-growth Bourdeauxs at his Greenwich estate. But voters expect politicians to lie and may have forgiven Lamont if his latest proposal was not replete with more myths. Let’s take a look.

Connecticut is notorious for low-balling construction and transportation estimates and then shafting the taxpayers. The construction for the ball park that houses the Hartford Yard Goats cost $72 million, not $47 million as promised. By the time politically-connected contractors, unions and the environmental lawyers (you would not believe how construction projects affect the self-esteem of the Piping Plover and the Red-Spotted Newt) are done; the cost will exceed $30 billion and have to be refinanced.

Myth Number 2. Cars with Connecticut transponders (e.g. E-ZPass) will pay 40 to 80 cents. User fees are fixed for the project period and will be capped for Connecticut passenger cars. These user fees will be “temporary.”

The guy who believes these user fees will be fixed in price is the same guy who still believed in the tooth fairy when he started shaving. As far as the user fees being “temporary,” the governor was speaking in geological terms, meaning the user fees will be removed when a glacier from a future Ice Age spreads across the Merritt Parkway.

Myth Number 3. Federal law and our state constitution prevent all net user fee revenues from being diverted for any other purpose other than transportation improvements in Connecticut.

This will never be honored. Connecticut has what is called a Special Transportation Fund (STF) that is supposed to pay for our infrastructure repairs. It is funded by the fifth highest gas tax in the country, not to mention a tax on petroleum companies (which is passed onto consumers), a portion of the state sales tax, motor vehicle taxes, licensing fees etc. In the past, the STF was raided and put into the general fund, mainly to fulfill generous pension obligations. Thus, our state constitution was amended in 2018 to prevent this theft by an overwhelming margin in a state-wide referendum.

Of course,  Lamont ignored this amendment, and used a legal loophole to prevent the transfer of vehicle sales tax revenue to the STF. He then demanded we pay tolls to replenish it. Why would anyone now believe the governor when he states after we pay tolls, he will not raid it again?

This is not the first time our political class has reneged on the voters’ attempts to control spending. After the passage of the state income tax in the early 1990s, a referendum amending the state constitution capping state spending passed by a 4 to 1 margin. Then- Attorney General Richard Blumenthal ruled that the legislature never “defined the statutory cap” and when taxpayers challenged his opinion, some liberal judge agreed with Blumenthal. Thus, when taxpayers challenge the inevitable toll increases or when they question the diverting of funds to finance bloated pensions, some liberal Connecticut judge will go into fits of uncontrollable laughter as she heaves their compliant in the circular file.

Myth Number 4. Forty percent of the tolls will be paid by out-of-state drivers.

Collecting from out-of-state residents who refuse to pay is problematic. Even collecting from in-state residents without transponders is difficult. Their license plates must photographed by the toll gantries, entered into a data base and then a bill has to be sent to their residence. But these data bases are outdated and people move all the time. Plus many people simply don’t pay. Illegal immigrants – many of whom have legal Connecticut licenses – will drive toll free if they refuse to pay. Connecticut passed a law prohibiting ICE (Immigration and Customs Enforcement) agents from detaining illegal immigrants for non-violent crimes. Of course, our political class will be issued “non- revenue transponders” – as they were in Massachusetts — so they will be able to ride around for free. It will only be the saps who play by the rules that pay.

Connecticut is a one-party extortionist state, where the taxpayers exist to fund the lavish lifestyles of the political class. The unfunded state-and-local pension obligations are a whopping $125 billion! Over 1,400 state employees receive over $100,000 annual pensions! And many of these pensions have annual cost-of-living increases that maximize at 2% per year. Thus, a pensioner who retires at 60 with a $150,000 pension can expect to receive around $275,000 annually if she lives to be 90 years old – and this does not even consider her Cadillac health care benefits. The only way this is mathematically possible is if tolls are instituted and then increased rapidly. And this is exactly what Governor Lamont will do if he gets his foot in the door.