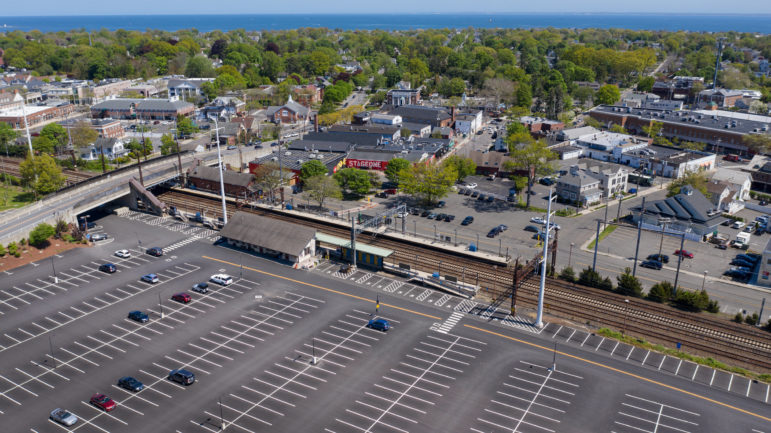 Downtown Fairfield's Metro-North Station is surrounded by a sea of surface parking and low-rise commercial development.

Fairfield County’s restrictive land use regime —especially its wealthy suburbs’ scandalous refusal to build any multifamily housing near their Metro-North train stations—is a disaster for the climate and the American Dream in Connecticut. More people living near transit will reduce emissions, expand chances to live in opportunity-rich communities and make those towns more dynamic places.

We need to build housing near train stations now, and state-level action on transit-oriented development is the best way to achieve that.

Recent opinion pieces have made the case for building more homes in Connecticut. Op-eds by Sara Bronin and Kevin Kurian discussed how multifamily housing will boost the state’s economy and lower carbon emissions, and Hugh Bailey argued that we need to “allow multifamily housing around any main street or transit stop” and pointed out that “even in Stamford we see the busiest train station in the state with acres of parking and vacant lots nearby.” This last point is one of the most devastating indictments of Connecticut’s land use —our Metro-North stations are woefully underutilized, especially in our wealthiest suburbs.

Getting people out of cars and walking or taking transit is one of the single most important steps our communities can take to reduce CO2 emissions. Unfortunately, restrictive zoning in wealthy suburbs makes that impossible for all but a few. Walk around the downtowns in Fairfield, New Canaan, Darien or Westport and you’ll come across an unusual development pattern by global standards: train stations surrounded by massive surface parking lots and relatively dense commercial development with no housing on the upper levels. Many of these towns have only a handful of apartments or condos within walking distance.

This unusual land use —something more akin to Downtown Disney drive-to walkability than a true town center— is by design. In March 2021 Nick Abbott of the Brookings Institute pointed out that in the 1960s the Greenwich planning commission vastly reduced where multifamily housing could be built, meaning that “from 1960 to 2010, the population of downtown Greenwich fell by 47%, including a 20% drop from 2000 to 2010 despite a local economic boom during this period.” The story is similar in other wealthy Fairfield County suburbs. Thus, while the region is driving Connecticut’s anemic population growth, that growth was concentrated in Bridgeport, Danbury Norwalk and Stamford. According to the 2020 Census, Stamford and Norwalk grew by 10% and 7%, while Greenwich and Fairfield, the 10th and 11th largest cities in the state, both grew by only 4% (amounting to a paltry 4,400 new residents combined between the two cities over the last decade).

If Connecticut is going to continue to grow and prosper, its train suburbs must allow infill housing near their stations. I can understand why an incumbent set of single-family home owners prefer the status quo of massive parking lots and easy access for themselves to Grand Central Terminal (even if I myself would prefer a walkable, more vibrant town). What’s less clear is why it’s in the people of Connecticut’s interest to let homeowners in Fairfield, New Canaan, Greenwich, Westport, Darien and other affluent suburbs wall off their towns and allow virtually no housing to be built near their publicly funded train stations. A warming climate and stagnant population demand changes.

Fortunately, there are common-sense, win-win solutions available. Desegregate Connecticut’s idea for Transit-Oriented Communities proposes that “multi-family communities should be approved ‘as of right’ (without a public hearing) with no minimum parking requirements, within a 10-minute walk of our transit stations,” an absolute priority during the next legislative session. Indeed, it’s hard to argue that apartments do not belong in downtowns and near train stations with access to Manhattan. However, we can and should think bigger.

Gov. Ned Lamont intends to make large investments in the New Haven Line with his Time for CT plan and the federal infrastructure bill, and we need to leverage that investment to maximize its positive impact on the climate and economy. It doesn’t make sense to invest hundreds of millions of dollars in public money in a system that often functions as a luxury transit service to Grand Central for wealthy suburbanites. Transportation expert Sandy Johnston made the case in an excellent 2015 blog post for transforming the New Haven line into “something unique in the U.S., an interurban regional rail system with a focus on moving people not just to and from New York City, but within Connecticut as well.” Pairing Metro-North reform with transit-oriented development would help combat climate change, expand the number of people that live in opportunity-rich towns and boost local businesses in the towns themselves.

Fairfield County has the chance to be the engine for a better Connecticut —a Connecticut emitting less greenhouse gases and a Connecticut with a multitude of growing, dynamic downtowns where people from all walks of life can build careers and lives. Pairing Metro-North reform with transit-oriented legislation is a no-brainer for our state and our world.