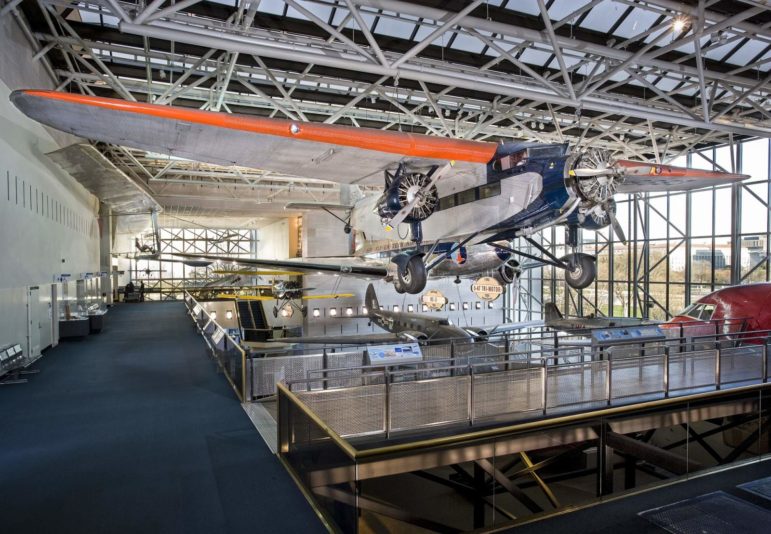 This Ford 5-AT Tri-Motor is on display at the National Air and Space Museum.

How does this sound: “Fly coast-to-coast in just 48 hours for only $5,200?” In 1929, that was the pitch for the first commercial, transcontinental air service operated by Transcontinental Air Transport. Founded by aviation pioneer Clement Melville Keys, the firm, which later became Trans World Airlines, worked with Charles Lindbergh to secure lucrative mail contracts. But these flights were a historic first for passengers.

The air transport company, commonly known as TAT, was mocked as “take a train” because its service combined rail and air service to complete the route from New York to Los Angeles.

Passengers first boarded an overnight train called “the Airways Special” at 6:05 p.m. at New York’s Penn Station.  This first ground leg was necessary to avoid the hazardous flight over Pennsylvania’s Allegheny Mountains, known to early air mail pilots as “Hell’s Stretch” due to the tricky winds.

After an overnight journey in luxury Pullman cars, the train arrived at a special rail station at Port Columbus, Ohio’s airport, where the adventurous passengers boarded a Ford Tri-Motor.  The three-engine plane, which seated eight or nine passengers, had a crew of a pilot, co-pilot and a steward (always a man).

The plane flew at 2,500 feet at about 100 mph, pushing straight through the clouds and rainstorms. After two hours of flight, it made the first (of many) refueling stops in Indianapolis. Sandwiches were brought on board for the next leg, a three-hour hop to Kansas City.  Then came Wichita and finally Waynoka, Okla. (population 931 even in 2017)  There the passengers boarded a special TAT bus and were taken to the train station for their second overnight rail journey, following dinner at a purpose-built Harvey House restaurant.

By morning the train arrived in Clovis, N.M., where passengers again boarded buses to the nearest airport, in Portair, N.M. There they had breakfast before boarding another plane to continue on to Albuquerque, then Winslow and Kingman, Ariz. Over the western mountain ranges, the Tri-Motor sometimes climbed as high as 8,000 feet.

The cabin was not pressurized, which brought about a lot of ear-popping and teeth-chattering, as a small onboard heater kept the cabin at no better than about 60 degrees. To treat air sickness caused by the turbulence, stewards passed out slices of lemon.

Finally, more than 48 hours after leaving New York, these aviation pioneers arrived in Los Angeles at about 6 p.m. Pacific time.  The one-way fare was a $352 (equal to $5,200 in today’s dollars), and that was for the cheapest Pullman train accommodation, a lower berth.

In its first 18 months in operation, the TAT transcons lost $2.7 million ($41 million in 2019 dollars). It didn’t help the bottom line that – to maintain the prestige of flying TAT – each passenger was given a solid gold fountain pen from Tiffany’s.

Then came the stock market crash of 1929, along with a literal crash, as a TAT plane collided with a New Mexico mountain, killing all eight on board.  This was the first fatal crash of a commercial airplane, but just the first of three serious accidents for TAT in the next five months.

Today you can fly non-stop from New York to Los Angeles in six hours, with one-way transit often costing less than $200.  You’ll skip the trains and buses, and enjoy in-flight movies and surf the web in a climate-controlled, pressurized cabin at 35,000 feet. You might even get a meal.

Jim Cameron is a public relations consultant with Cameron Communications Inc. of Darien. Posted with permission of Hearst CT Media.