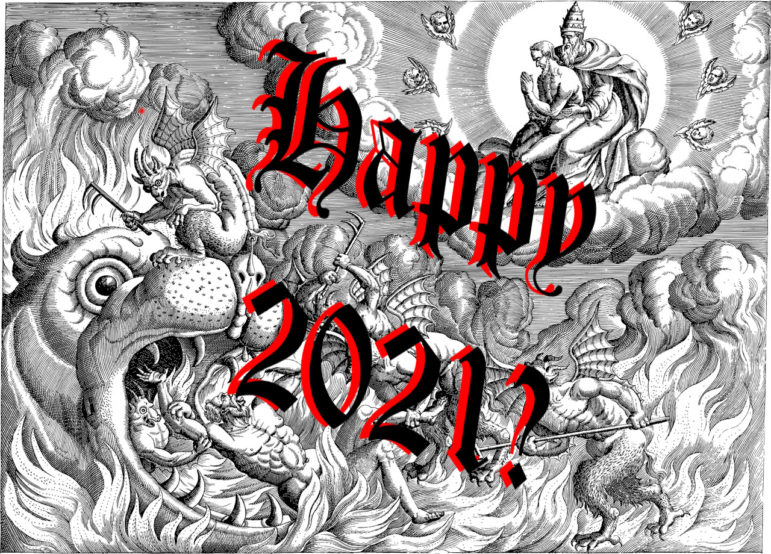 Do you want to jinx it already? Besides, let’s be realistic, shall we? How happy are any of us going to be this side of Warren Buffet?

I’d happily settle for “Hope you make it till spring, Dave.” Or “Happy uneventful February.” Even “Have a short stint in the ICU.”

I’ll consider 2021 an upgrade if I never hear the words fake and great again. My New Year’s resolution is to never use them (and a few others) in a sentence ever again.

Let’s face it: this year isn’t starting out well, literally and figuratively. More of us are getting sick and dying. Facts and reason continue to be in full retreat. Russia has been rooting around in our most intimate governmental and corporate computer networks for nearly a year before anyone noticed.

The man who was supposed to make us (overused adjective deleted) again has made us sicker.

His diehard supporters don’t see it that way, however. Nearly 50 percent of the people will believe nearly anything these days. No proof needs apply. They apparently believe him (he who shall not be named by me ever again) because his lips are moving.

If he said double fudge swirl ice cream drowning in caramel sauce is better for you than organic broccoli, people would believe him.

If he said the fork ran away with the spoon, right after the cow jumped over the moon, they wouldn’t even ask to see a video.

The fairytale he did tell them (starting months before the voting even started) was that the 2020 election—in which Republicans gained nearly a dozen seats in the U.S. House of Representatives— would be, and was ersatz (synonym for a word I shall never type again). And many believed him.

There is no evidence of any irregularities that could have affected the outcome of the election. Dozens of judges of both parties (including Supreme Court Justices) have so ruled. Even the recently retired U.S. Attorney General and general flunky for (you know who) said so. Evidence, of course, is so 2015.

Now some congressmen and senators are compelled to say they believe (his totally Lame Duck-ness) regarding the election (whether they do or not) because he and they have convinced their “base” that the other party is the Devil’s spawn —populated by socialists, swindlers, communists, pedophiles, jaywalkers, or worse. These august “statesmen and women” must endorse the nonsense they have been peddling —or, after the next election, start looking for real jobs.

My fellow Americans, it doesn’t have to be a Happy New Year to be a better new year. We can do better; and our leaders most certainly can do better. We should insist on it. If they can’t start getting along better (both sides now), there is little hope for you and me. They have been aiding and abetting our mounting partisanship for decades, and now they have reaped the whirlwind.

Have a Passable New Year.