Her story in support of ending one’s life with dignity

Death with dignity is a tough issue for many of us.  Although I have co-sponsored the bill before the Legislature today, I didn’t always support the concept. I have had my doubts even over the last few years. When I started to think about it as a matter of individual choice, I realized what a personal and intimate decision it was.

I also draw my support from a deeply personal experience.

Three weeks before my parents got married, my athletic, exuberant father was diagnosed with early-onset Parkinson’s Disease.  Less than a decade later, he was laid off from his job as an executive vice president at a bank and forced onto disability, and he was maxed out on the medications that mitigated his symptoms.

He could no longer drive because he fell asleep at the wheel, and had to have me, his 9-year old daughter, pull him up from chairs and help him in ways that no child should have to help a parent.  As his central nervous system progressively failed him, his dignity was lost.

A last hope and prayer came with the new pallidotomy operation in the mid-90s, but all was lost when the surgeon took experimental liberties that cost my father the ability to swallow. He was left with a feeding tube, and was unable to help me with even the easiest of sixth grade math assignments.

Three months after surgery that was supposed to give him new life, he was dead. It wasn’t the Parkinson’s or the operation that killed him; he had taken matters into his own hands.  His death was unattractive and undignified. He drowned in our local reservoir. He never learned to swim and was intensely fearful of the water, so there is an even sadder irony to the way he chose to die.  The next day, our local newspaper ran the front cover with his lifeless body freshly pulled from the water.

For years, I convinced myself his death was an accident, and he never would have chosen that kind of death. But the truth is, he felt he had no other choice to do what he did that day because Parkinson’s and the operation had robbed him of so much.

It wasn’t until my early 20s that I found peace with his death, and began to understand that he did have a choice and that he was very much in control that day. He did not die because of an unsteady gait – typical of the Parkinson’s – that caused him to slip multiple times and fall to his death. For two decades, my father’s life had been involuntary. But he was not as cold, terrified and alone that day, as I had imagined. In fact, my father’s death was the last thing he was in control of. 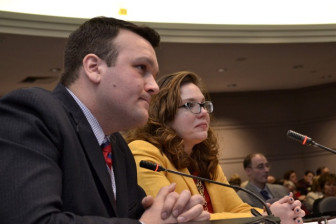 I am here before you today because even though death with dignity wouldn’t have applied to my father at that point in his life, it is imperative that we give people choices at the end of their lives.  We have fought for decades to have the right to make decisions about our own bodies and this is no different. This is an issue all about choice.

Eventually the Parkinson’s would have taken my father’s life, but what a different experience the end could have been for him, and for me as a survivor. His choice at end of life only added another layer of pain for my family.   People should have control over their bodies, and decisions about their lives should not be made by others.

People don’t like to talk about death, but it’s inevitable; and I hope in the end that I have the choice to decide what is right for me and for my family.

Parkinson’s stripped my father of a life with dignity. Wouldn’t it have been great if in death his dignity could be regained?