How dogs and cats can get their day in court

In 2016, the FBI started to track animal cruelty, including neglect, torture and sexual abuse, because of disturbing connections.

“If somebody is harming an animal, there is a good chance they also are hurting a human,” said John Thompson, the deputy executive director of the National Sheriffs’ Association. “If we see patterns of animal abuse, the odds are that something else is going on.”

His association has observed links between animal abuse and other types of crimes, including domestic violence and child abuse. Indeed, mass murderers Jeffrey Dahmer, Ted Bundy, “Boston Strangler” Albert DeSalvo and “Son of Sam” David Berkowitz all admitted to torturing and killing animals in their youth – long before they started killing people.

The evidence is more than anecdotal. Researchers like psychologists Randall Lockwood and Frank R. Ascione have determined that people who abuse animals may move on to hurting people. By vigorously prosecuting animal cruelty cases, the justice system could potentially help stave off violent crimes against people. But these animal cruelty offenses often get short shrift in state courts.

In response to longstanding failures to aggressively prosecute and sentence perpetrators of animal cruelty, I developed a way for lawyers and law students to advocate for animal victims. I believe this approach can solve the problem of under-enforcement of anti-cruelty laws and achieve justice for animals.

Since courts and prosecutors often have more cases involving crimes against people than they can handle, they often dismiss or drop animal cruelty cases or allow defendants to use probationary programs – leaving no record of the offenses.

Without a record, suspects who have already abused animals are treated as first-time offenders. They return to their communities, often without a record of their offenses, and can repeat acts of violence to animals – or humans.

In fact, most animal cruelty offenses in Connecticut and the rest of the nation end without trial or conviction. This leaves perpetrators without a record or consequences.

According to the Connecticut Office of Legislative Research, 3,723 offenses were brought under the state’s animal cruelty statute from 2006 to 2016. Only 749 of them went to trial, but in 93 percent of those cases the defendants were found guilty.

To demonstrate that legal advocates for animals can reduce the burden on courts and increase the enforcement of anti-cruelty statutes, I teamed up with Connecticut State Representative Diana Urban, a Democrat who represents the town of North Stonington.

Together, we created an innovative law that Urban introduced and championed. This measure instituted a program that empowers courts to appoint legal advocates to represent the interests of justice in animal cruelty cases involving dogs and cats.

Informally called Desmond’s Law, the new statute is designed to strengthen and support anti-cruelty efforts. The statute is named after a boxer pitbull mix dog in the town of Branford, Connecticut, who was tortured and killed in 2012. Alex Wullaert, who owned Desmond, admitted to the wrongdoing but then took part in an accelerated rehabilitation probation program that erased the offense from his record.

I don’t believe that accelerated rehabilitation is appropriate in many animal cruelty cases because the offenses are often serious, and there is a high rate of recidivism for certain offenders, according to the Animal Legal Defense Fund, an advocacy group. And, as seen with many serial killers, this kind of behavior may lead to violence against humans.

To support more vigorous enforcement of anti-cruelty statutes, Desmond’s Law creates a program that allows courts to appoint supervised law students or lawyers to serve as volunteer advocates for animals in cruelty cases. These legal experts represent the interests of animals and justice, mirroring a practice that is already standard for children who have been abused or killed.

Advocates research police and veterinary records, interview experts and present recommendations to courts regarding intermediate and final issues in cruelty cases. They aim to ensure that courts consider and protect animal interests. Volunteers from Desmond’s Army, an activist group, track all cruelty cases in the state and attend every court hearing.

Both the Connecticut Veterinary Medical Association and the Connecticut Federation of Dog Clubs and Responsible Owners opposed this law. They argued that it would interfere with owners’ rights to treat animals as property in any manner they choose. They also claimed it could establish legal standing for animals or their advocates, leading to “legal mischief.”

I disagree with both points. First, existing anti-cruelty laws already recognize that animals differ from other forms of property by requiring their humane care and criminalizing neglect and cruelty.

Second, advocates try to ensure that existing laws are enforced but do not actually represent a litigating animal. The new law does not create legal standing for animals and, of course, the animals don’t appear in court. Instead, the advocate informs the court, and recommends outcomes that serve the interests of justice. These efforts support vigorous enforcement of anti-cruelty statutes.

The track record so far 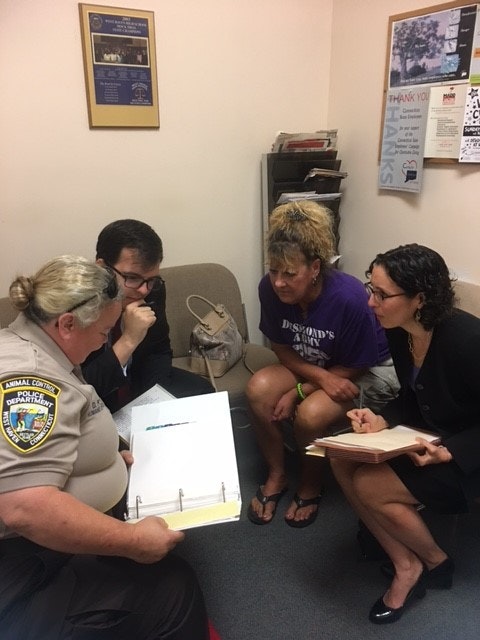 Since Desmond’s Law took effect in October 2016, advocates have been appointed in 16 cases – all involving dogs and cats who were victims of cruelty. Students at the University of Connecticut School of Law are currently working on seven of these cases under my supervision.

The first case to use Desmond’s Law involved a defendant accused of engaging in dogfighting, which is a felony animal cruelty offense in Connecticut. Lacking a record of prior convictions, he was eligible to apply for an accelerated rehabilitation program, through which a defendant who complies with court conditions and does not commit additional offenses may have charges dismissed.

Taylor Hansen, a student under my supervision, argued that the defendant should not be eligible for the accelerated rehabilitation program because the crime of which he was accused was serious and likely to recur.

Connecticut Superior Court Judge Omar Williams allowed the defendant to use the program. The judge was, however, receptive to our arguments and willing to impose our suggested conditions on the defendant’s probationary two-year program term. For example, the defendant may not have any contact with animals and must undergo a psychological assessment.

This pilot effort shows how legal advocates for animals can influence animal cruelty cases. Hopefully, by supporting more vigorous prosecution and sentencing, and establishing criminal records for perpetrators, advocates and the justice system can deter further violence against animals and people.

Jessica Rubin  is an Assistant Clinical Professor of Law at the  University of Connecticut.  This article was originally published on The Conversation. Read the original article.